Proven Lands is a game I have been following for some-time, it has finally come to Kickstarter with Linux support as standard. Proven Lands is a beautiful science-fiction sandbox roguelike, procedurally generated and studded with an AI storyteller. 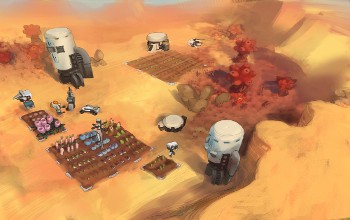 I don't often cover Kickstarters now outside of our Funding Crowd articles, unless they are as amazing as Proven Lands.

There are masses of features to the game, I have listed only a few due to how vast a game it is:

The game sounds fantastic and I really hope they are able to deliver as it is very very ambitious, but it already looks great!

Linux is not a stretch goal and will be supported as standard as they are using Unity, although they are not using Unity like a lot of people would expect.

I also spoke to the developer to ask a few questions:

Q: Can you introduce yourself and your project briefly

QuoteI'm Rafael Wawer, engineer and creator of Proven Lands. I started to code games as a kid on a C64 and today I am professional engineer for 10+ years. Proven Lands is my dream game. Proven Lands is a procedural 3D science fiction sandbox roguelike-like, influenced by Star Trek, Don't Starve, Project Zomboid and roguelikes as Cataclysm and Dungeon Crawl.

Q: You use Unity for your project, but you can you tell us why there is no Linux pre-alpha?

QuoteWell, Unity is a great engine or tool for game development, it is easier than Ogre, Irrlicht or even UDK, imo. We use Unity for porting and as an editor, as I like the class hierarchy of Unity, to be honest. But, porting can be still time consuming for many technical reasons. In Proven Lands, for instance, I wrote the terrain engine and the shaders myself, which means that I need a few days to add *nix-only workarounds. Another points are texture compression and OpenGL limits, in general. Today there is that RenderTexture or HDR issue on *nix, that's why I need to make sure that everything is ok. We are super small. I'd like to be careful with releases. As it even ran on Android, with limits, three months ago, before I improved the graphics, I think, 'nix is not a problem at all, just a matter of coffee and time. I hope to release a *nix demo within the next weeks, before the Kickstarter end.

Q: How have you found Unity's Linux support to be?

QuoteSo far? It's quite cool. I think the best thing about Unity is the community behind it. Great people. Unity is not Flash or something, it is more a cross-platform framework with a good editor based on the Mono framework. It helps you, but it has its disadvantages.

Q: You state the terrain is endless, can Proven Lands really live up to that and allow us to explore forever? How far does the land really go?

Quote(Ha ha.) Nah! "Endless" terrain is, obviously not possible, from an engineer's perspective, as even Minecraft has an end. But as long you code a smart local storage sync you can run and run for hours. To be honest, one guy told me yesterday that he ran into one direction for one hour. I am quite sure that the memory print of a Proven Lands written in C++/OpenGL would be smaller, but then then game dev would much longer, therefore I hope to press the engine to its limits. Every engine, framework and tool has it's downs. I think of Proven Lands as "discover unproven lands", and it means that, as a gamer, I like to experience tons of terrain chunk types for weeks. This part is the part I spent most of the time the last months.

Q: How deep will the RPG side of the game go?

QuoteQuite similar to most roguelikes. Eat, drink, chop trees, destroy stones and kill enemies. Dungeon Crawl, NetHack or DoomRL? Fight hunger, thirst and diseases, which is also part of the current Windows demo. You already die in the demo because some character traits lower your health. In addition, I'd like to add a story engine to it -- with randomly placed scripted quests and an AI game master, with random ambitions, similar to Crusader Kings, which I love, btw.

Q: With the day and night system, you stated certain animals may be better at night, are we likely to see different animals at different times?

QuoteYep. It is time consuming to model, texture, rig and animate a whole animal race, but as already did some magic and release in Q1 2015, knowing some great talents among our friends, this will be fun. Actually, I like this idea a lot -- due to Minecraft. The only issue with Minecraft is that there is no deeper explanation or natural rule why the enemies are coming at night. In Proven Lands I'd like to give certain creatures a higher chance to hunt other animals, aliens and humans down, similar to some Earth predators and even cats, which is natural behavior and selection. Certain animals will come at night because it is saver and easier for them, like in real-life. Hard science fiction.

Q: Will the player need to eventually follow a story-line, or can players adventure, explore and build to their hearts content?

QuoteFeel free to skip the whole scripted story, as I do not expect to play it myself more than twice. You'll be kept busy battling thirst, hunger, oxygen deprivation and dwindling energy supplies ... but as soon you've gathered enough resources, seek out for new civilizations. Do you remember Crusader Kings? There is no scripted story in CK2, but thanks to their AI mood, trait and ambition system, I did play it for 145 h, according to Steam, with some great stories. This is what our AI game master is about and why we have a character mood and trait system already.

If this game doesn't get funded on Kickstarter, I will be quite surprised!

I am the owner of GamingOnLinux. After discovering Linux back in the days of Mandrake in 2003, I constantly came back to check on the progress of Linux until Ubuntu appeared on the scene and it helped me to really love it. You can reach me easily by emailing GamingOnLinux directly.
See more from me
Some you may have missed, popular articles from the last month:
The comments on this article are closed.
4 comments
Anonymous 9 Mar, 2014

Give me one example of what OpenGL can't but DirectX can and I'll believe.
0 Likes
jdub 9 Mar, 2014
Whew looks good....but looks like a ways away for post-release Linux version. Glad it's not a stretch goal =) Will keep an eye on it for sure...thanks for the report.
0 Likes
manny 10 Mar, 2014
looks really cool, but that's quite a goal they are aiming for.

they will need major coverage from as many places as possible.
0 Likes


Give me one example of what OpenGL can't but DirectX can and I'll believe.

Be locked down to one platform and the highest bidder ;)
0 Likes
While you're here, please consider supporting GamingOnLinux on: