By Liam Dawe - 6 June 2014 at 5:53 am UTC | Views: 19,265
LIMBO caused quite a stir when it was released for Linux being wrapped in a custom wine wrapper by Codeweavers, but that saga looks like it's coming to and end. View PC info
What makes you think it's a native client? the "launch/2/executable" line? Can't it be the Wine wrapper?
1 Likes, Who?
Samsai

Quoting: abelthorneWhat makes you think it's a native client? the "launch/2/executable" line? Can't it be the Wine wrapper?

Icculus wouldn't be involved if it was a Wine wrapper. AFAIK he has never been involved with non-native ports.
1 Likes, Who?

View PC info
Thanks Icculus! I love you!
1 Likes, Who?

Quoting: abelthorneWhat makes you think it's a native client? the "launch/2/executable" line? Can't it be the Wine wrapper?

It worked great on Mac.

I think that eON just needs polishing (and of course we, Linux users cannot be laboratory animals anymore, at least not when final version of products are released).
0 Likes
Imants 6 Jun, 2014 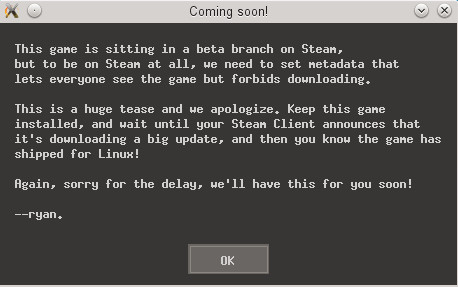 I played through this game some years ago, will be nice to finish it again (for the achievements, of course ;-).
0 Likes
entropy 6 Jun, 2014
Well, I'm still wondering how much the costs differ between the wrapping approach by VP and hiring Icculus for a native port*.

I don't know the prices VP take to wrap such an AAA title but I have the strong feeling this isn't cheap either. They said it's not a one-click solution, but involves manual tuning of the game. After all, they're now still working to improve performance. That's developing time wanted to be paid.

[*] note, IIRC, all middleware used in Witcher 2 is available for Linux.
0 Likes

Sabun 6 Jun, 2014
View PC info
I think Icculus might be overburdened right now. Goat Simulator and Sanctum 2 are both under him, and those haven't moved at all.

If he is the one making Limbo native now, I'm worried he's gone and taken on too many jobs at once. If anyone has further information on this, please share it with me.
1 Likes, Who?
1/4»
While you're here, please consider supporting GamingOnLinux on: