Today should be a good day for you nostalgia lovers, because Shovel Knight has been released for Linux! Shovel Knight is a charming NES-Inspired platformer that was funded on Kickstarter and release for Windows back in June. The game has received a lot of critical praise; being described as a love letter to old school platformers. To celebrate I've bought a humble key (Includes DRM-Free and Steam key) to give one of our readers. If you want a shot read the instructions at the bottom of the article. 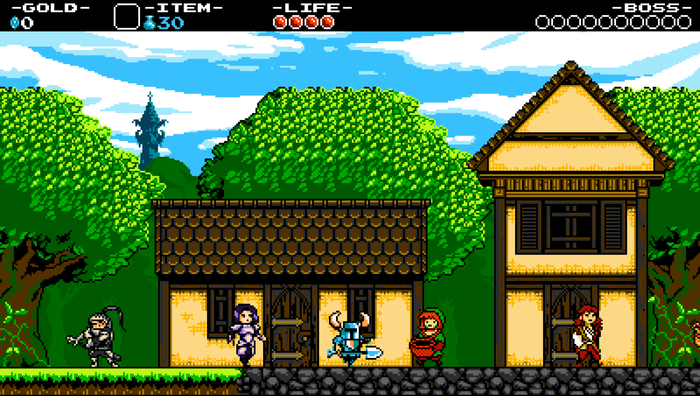 The plot is a retro tale of rescuing a damsel, beating the bad guy (or girl in this case), and becoming a hero. And like a lot of love-letter games, expect to see a lot of enemies, weapons, and mechanics that seem familiar. At first glance the game takes a lot of inspiration from games such as Super Mario 3, Castlevania, and the Mega Man series. A lot of the graphical fidelity, effects, and level of detail looks more toward the SNES spectrum of visuals than NES, but I think it was a good decision since it's more pleasant to look at. However, the color pallet and design stay pretty true to the concept; lots of great contrasting colors and hidden secrets. The boss fights especially reminded me of the hours I put into the boss fights in the Megaman games. Speaking of which, this is also supposedly either very challenging or a bit too easy; there doesn't appear to be a consensus. Still, even if you blaze through the game, there appears to be a lot of upcoming free content updates including a challenge mode, new playable knights, gender swap, and a battle mode

If you're looking for an unbiased view, I'm probably not the person you want a review from. Everything about Shovel Knight fits to my taste: Beautiful pixel art, chiptune soundtrack, tight platforming, and charming characters. I've been beyond excited for the last 3 months, and I doubt that's going to ease up over the next day or so. However, while I'm as sold as possible, you can generally find praise of Shovel Knight on pretty much every big gaming news outlet, so as far as I'm concerned it's a pretty safe purchase. But you're probably more interested in that free key, right? We're almost there.

Shovel Knight is a sweeping classic action adventure game with awesome gameplay, memorable characters, and an 8-bit retro aesthetic. It's a hot mashup of new and old! You play as the eponymous Shovel Knight, a small knight with a huge quest. Shovel Knight has come to this land with two goals: to defeat the evil Enchantress and quest for his lost beloved. He wields a Shovel Blade: a multipurpose weapon whose techniques have now been lost to the ages. Always honest and helpful, Shovel Knight is a shining example of the code of Shovelry: Slash Mercilessly and Dig Tirelessly!

But, between Shovel Knight and his beloved stands a cadre of villainous knights. These terrible foes, known as The Order of No Quarter, have been dispatched to prevent Shovel Knight from reaching the Enchantress, and will pursue their mission at any cost. If you love games with perfect platforming, beautiful art, infectious music, crazy bosses, humor and levity, and real heart… Shovel Knight is for you!


You can pick up Shovel Knight on both Steam and Humble (DRM-Free build available!) Edit: Also, you can pick up the soundtrack at Bandcamp (Thanks, McCoy!)

Now about that free key! In the comments, I want to know why you think the developer and funders thought this era of gaming was worth revisiting. I want you to give one unique quality of NES/SNES games that made them so special, along with a game that you feel exemplifies it. I'll pick my favorite by tomorrow and send the winner a Shovel Knight Humble/Steam key.

Update: It's over! We got a lot of interesting answers, but I've gotta give it to Dibz; thanks to everyone for participating!


Article taken from GamingOnLinux.com.
Tags: Adventure, Humble Store, Indie Game, Platformer
0 Likes
We do often include affiliate links to earn us some pennies. We are currently affiliated with GOG, Humble Store and Paradox Interactive. See more here.
Some you may have missed, popular articles from the last month:
The comments on this article are closed.
19 comments
Page: 1/2»
JIghtuse 9 Oct, 2014
Still not available for Linux on Humble Bundle.
0 Likes

View PC info
Oh, I had been thinking of picking this up. Might wait until it's on sale because recent and upcoming releases have been tough on my wallet (the free key would be a nice solution :P).

What makes the NES era and games like Megaman (which Shovel Knight was clearly inspired by) special to me is the fact that devs had a lot less power and tools to work with and so had to find creative solutions to make their games stand out. It meant tight controls, creative sprites and, most importantly, beautiful music that still stands the test of time. Just look at all the remixes of NES music still being made to this day. The Castlevania games did a great job too but I have to state that Mega Man 2 just is timeless, musically. Nearly every video game fan I know can hum at least one of the songs - Wood Man, Metal Man, Crash Man, and especially Dr. Wily's 1st stage. To me, the fact that they managed to make such great music while working within a lot of hardware restrictions is simply mindblowing.
0 Likes
micmon 9 Oct, 2014
Nice, they managed to finally release this during a time where I really can't care about any more new games anymore :(
1 Likes, Who?

Alzarath 9 Oct, 2014
View PC info
Shovel Knight looks great. I'd love to show support by purchasing it, but sadly I can't, so I'll resort to trying to win it here! Either way, hope whoever wins enjoys it.

That era of gaming seemed to thrive on clarity. The graphics were usually simple, but there was never a point I asked "Where am I?" or "Where do I go?". The controls were generally obvious, and the movement was responsive, often lacking weight and giving it that 'arcade' feeling. Because of that, you'd usually be able to tell whether you could make a jump or not.
0 Likes

View PC info
A unique quality that defined NES games for me... hmm. The simple graphics and difficulty.
Most of the games were so hard to beat that the act of actually beating a game was far more rewarding than beating most of the games nowadays. Yeah, I'm looking at you "Battletoads" and "Dr. Jekyll and Mr. Hyde". :D

The simple graphics part that made them special was, as I see it, mostly due to platform limitations. Developers really had to think how to represent the objects they want with optimal gameplay integration... but we all know how that ended up most of the times.

View PC info
Why did they choose that era? simple gameplay, back then the games had to be playable, fun, exciting, frustrating & rewarding without the flashy graphics we have now, as has been shown time & time again flashy graphics on their own do not a good game make.
0 Likes

The best thing is that there's even a link to the NSF file, so the soundtrack could be played on an actual NES. Or an emulating player like Nosefart.
2 Likes, Who?

View PC info
Think they chose that era, simply because when you actually finished one of the games you felt a sense of accomplishment. These days, alot of the games are pretty simple to get through and there isn't a whole lot of difficulty to be had.
0 Likes
Osirez 9 Oct, 2014
There's a certain amount of fun to be said for simplicity. The NES era defines that in my opinion.
0 Likes

View PC info
The NES represents a time when the emphasis was on the gameplay, fun, and story not graphics.

How many games released today will still be enjoyable 30 years later? People will still be playing NES games 30 years from now when they are 60 years old.

Nothing says fun like Crystalis. I have beat that game more times than I can count. At least 20 maybe 50 times. In fact it made me fall in love with Action RPG games.
1 Likes, Who?
1/2»
While you're here, please consider supporting GamingOnLinux on: