A Review Of Crystal Catacombs, A Retro-Inspired Platformer

Crystal Catacombs is a 2D platformer that came out on Steam last month after a successful Kickstarter campaign. It features hand-drawn pixel art, an assortment of differently-themed areas and a chiptune soundtrack.

As a fan of platformers and franchises like Mega Man, Castlevania and Metroid I was intrigued and decided to give the game a try. Particularly after reading the following in the official about:

Before I was able to delve into the gameplay properly, I ran into a problem; my gamepad (a Wii U Pro controller) had issues with its button mapping. There was no option to redefine controls in the main options and after looking around for a configuration file I could edit I decided to simply start the game and play with the keyboard instead of looking for my older gamepad. It turned out that keys can be redefined in the pause menu. However, some functions, such as zooming in and out and the axis are hard locked and could not be edited. This isn't a problem limited to my choice in gamepad as the officially supported wired 360 pad also seems to have issues in the current build of the game. Still, I managed to work around these eccentricities and jumped into the game.

The game is structured with several realms (themed series of stages) that, depending on the difficulty chosen, are selected either at random or at the player's choice. Each realm has five stages with a mini boss on the third and a boss on the last. These five stages are randomly generated and in theory add an endless variety for players on each run they attempt. Players control a character who can jump off walls to explore the area until they find the key and go to the next stage, killing monsters and generally trying to survive. If the player dies, then he is dumped into another randomly generated stage until all his lives run out.

There were several design decisions that left me scratching my head and prevented me from getting immersed in the game the foremost of which was the lighting and palette for each realm. As expected the map is unseen until you explore it but in addition to that there's a fog of war sort of effect for things not immediately in the character's field of vision. This field of vision is remarkably small which means that most things in the game are darkened by the fog of war which in makes things harder to see. Combine this visual limitation with an overuse of similar colors in each area (both for enemies and backgrounds) and it is often difficult to tell where things are, if a spot is safe and if there's a block in place or it's just background detritus. 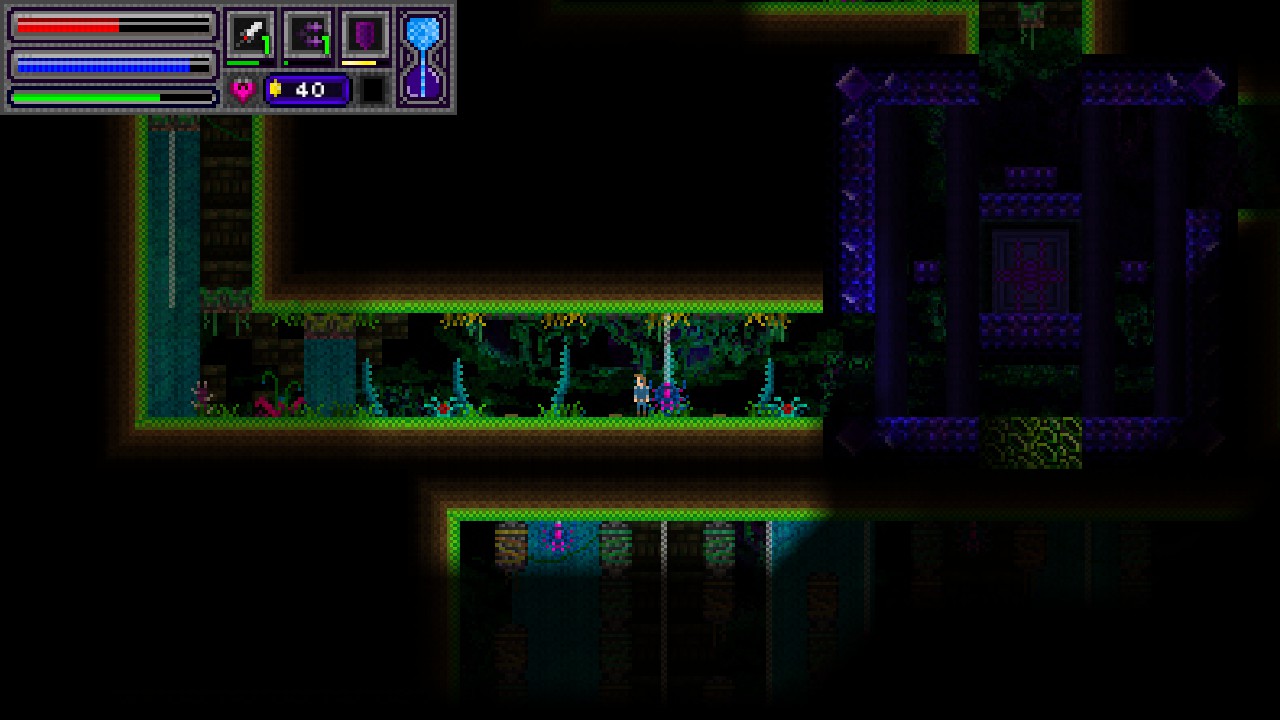 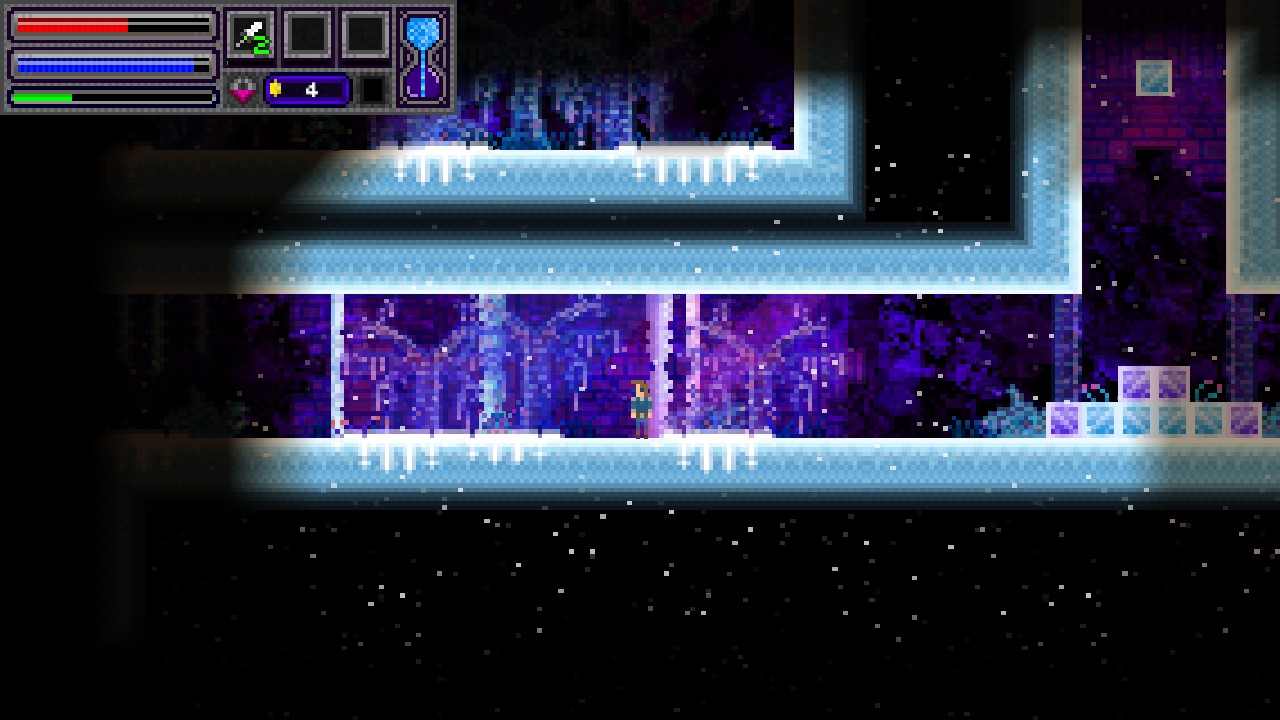 This was particularly bad in two areas: in a castle-themed area where tombstones where zombies would spawn from would blend in with the piles of bones, background tombstones and general greyness and a jungle area with a lot of basically almost instant kill traps whose switches were two pixels high. Ironically, the darkest area that was thematically Lovecraftian proved to be the easiest to navigate around in. With the fog of war it can be difficult to spot some of these enemies (especially as they fly towards you quickly) before it's too late. 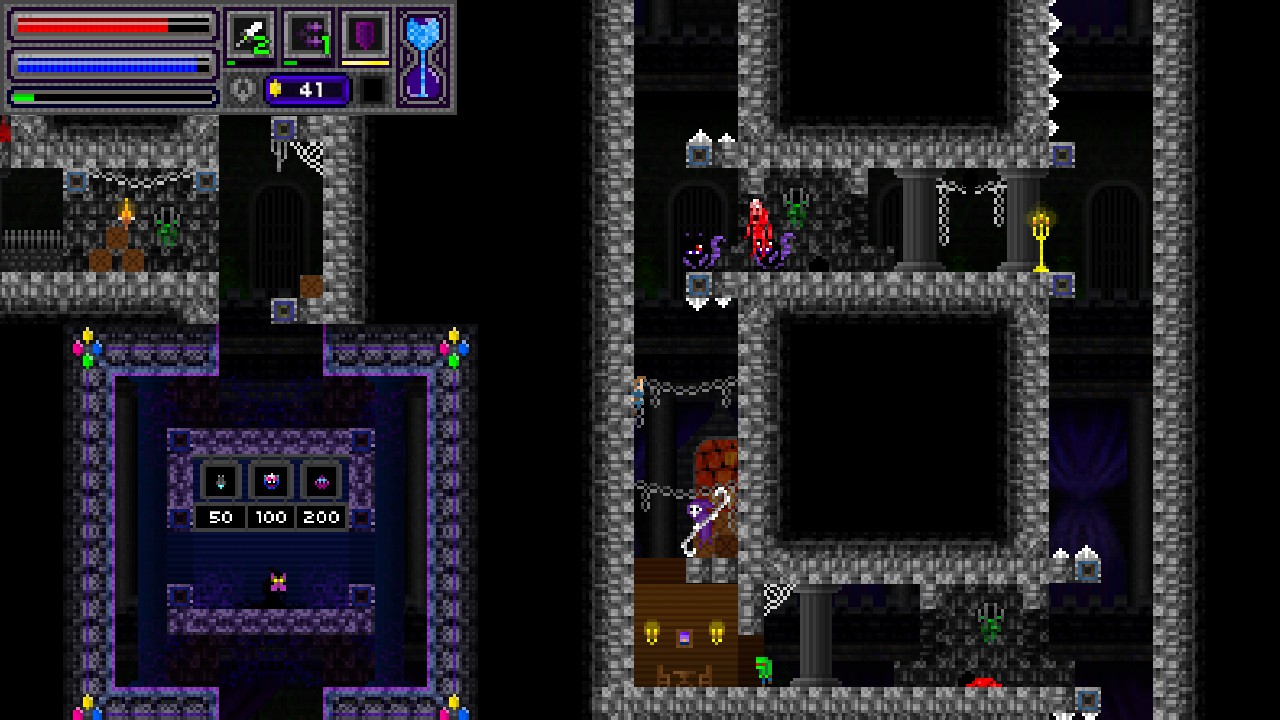 The game looks and plays better without the grey fog

Naturally, colliding with an enemy does damage. Which is a no-brainer, except that there is a strange inertia to jumping that more than once made me collide with an enemy whom I couldn't avoid. That made the experience of precision platforming and fighting a little frustrating. This is particularly hazardous as the game gets more difficult (every x number of stages you clear depending on the difficulty) as you can get killed in one or two collisions easily if you haven't levelled up your defense.

The levelling up system is another shortcoming of the game. It's not explained at all. In fact, nothing in the game is explained to the player. I don't mind a game that doesn't hold its players' hands but a manual, short tutorial, tooltips, a quick reference card or anything that explains the basic mechanics and gameplay is important no matter what your game is about. There isn't a guide on either its official page or the steam forums. It took me unacceptably long to figure out that the smaller gauge that filled up a little after I levelled up meant that I could spend a stat point in the inventory menu when it was full.

Though the game promises an array of weapons, equipment and upgrades the truth is that they're rather limited in functionality and rare in the game. The game gives you an option between three items every mini boss or boss you defeat as well as occasional drops in treasure rooms but in my multiple hours of gameplay I saw very little that could be described as varied. Sure, cute references to Castlevania and other classic games were in the item descriptions but gameplay wise I didn't really feel much difference in the items types.

Games like Castlevania (Symphony of the Night and later) and Rogue Legacy change dramatically depending on what weapon, equipment and abilities you have equipped. The player's strategy can vary dramatically and it's fun to find stronger equipment or try a new combination. In Crystal Catacombs it feels like a weapon can have a bit more or less of reach with an according tradeoff in power or, if it's a projectile weapon, whether or not it's a curvy line or a straight line. The abilities granted by equipment are for the most part useless: there's no new areas to visit by sliding or doing an awkward dash movement that's enabled by certain items. 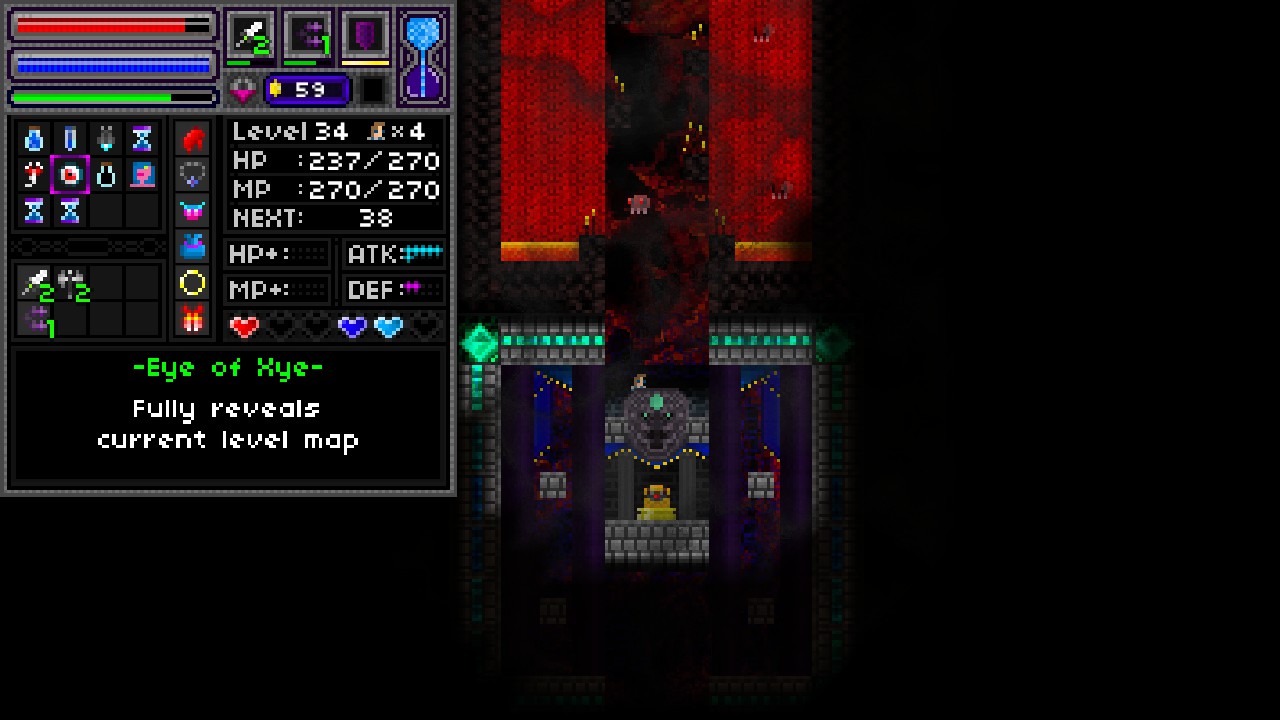 At least item descriptions are mostly to the point

Moreover, there's nothing really to do in each stage except make it to the exit after finding the key. There are no breakable walls or hidden areas that are the staple of these exploration platformers. There are rooms that warp you in the area, treasure rooms and occasionally rooms with a merchant but that's it. There is no real reason to dawdle in an area if you know where the exit is as the rewards in each area are not worth the effort of jumping up and down walls and walking around. There is no reward for fully exploring the map save for an insignificant amount of XP to be gained from killing a few more monsters.

Save the annoyances of some enemies blurring with the background occasionally, the overall enemy design is solid. The enemies are distinct and the bosses are all very different both in appearance and mechanics. This is the good part of the pixel art. The bad is that the main character is nothing special and some of the room design is uninspired. The music composition, too, is nothing to write home about. It's definitely chiptune and not bad by any means but it's not anything memorable like the Shovel Knight soundtrack.

Unfortunately the game runs at a maximum of 1280x720 in a windowed mode and fullscreen was the typical Unity mess where it became overly stretched in my dual screen setup. Performance was solid on Mesa and I encountered only a single minor bug that had to do with how quickly the character sank in sand after being hit. 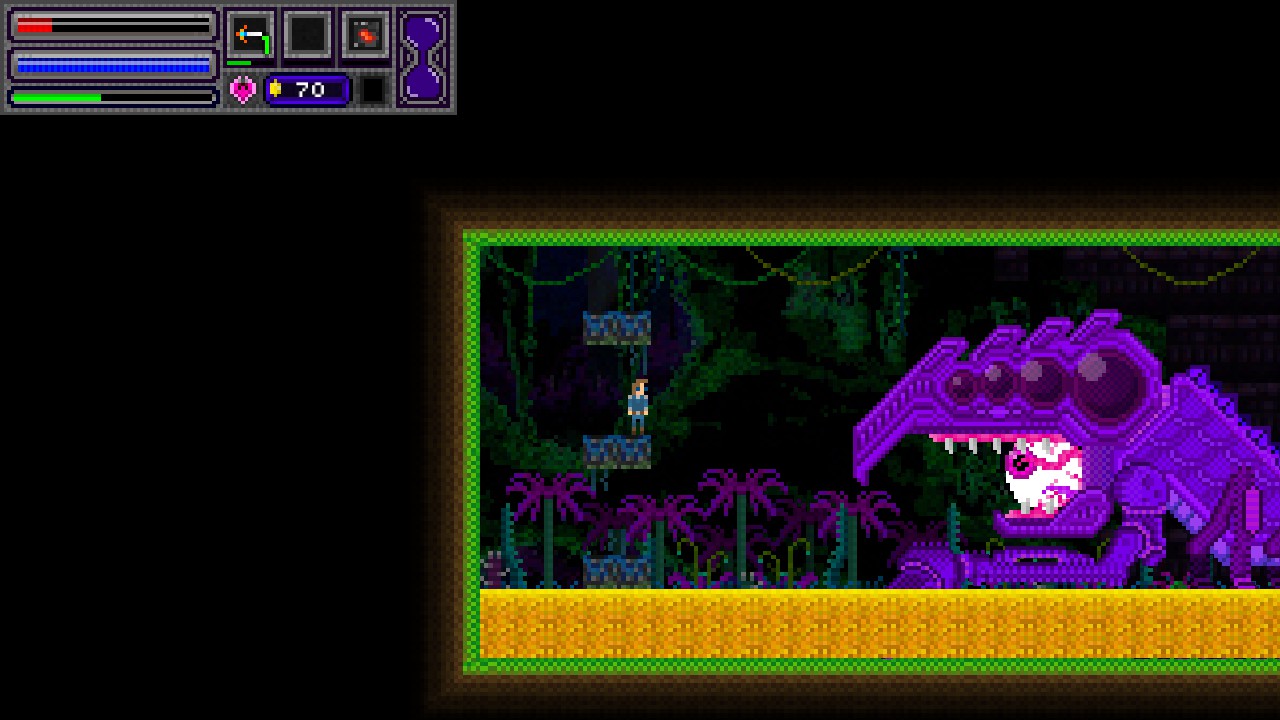 All other issues aside, the boss fights are entertaining and challenging.

I was disappointed in Crystal Catacombs to the point that I didn't feel drawn in or compelled to actually finish a run (I spent a total of 5 and a bit hours as of the time of writing) as I had already seen all the initial realms just by starting over before I had gotten over the learning curve. The controls aren't as tight as they should be for a platformer and the equipment and levelling feels too superficial for me to enjoy tracking down items. I might one day revisit the game but it seems unlikely that I'll ever be enthusiastic about it. Which is a shame since all of the elements it promises are essentially catnip to me when combined correctly.

This isn't a terrible game but it's difficult to recommend it at full price. Players seeking a challenging game that requires a lot of practice to beat at the higher difficulties will get a kick out of it. As will any players that can look past the same-y levels in each realm to enjoy the at times cool-looking and creative monsters and bosses. However, if you're looking for a fun platformer with better executed exploration and platforming, I'd recommend Shovel Knight, Rogue Legacy, Cave Story + or Guacamelee before Crystal Catacombs.

You can grab Crystal Catacombs from Steam or get a DRM-free version through the Humble Store. Article taken from GamingOnLinux.com.
Tags: Humble Store, Platformer, Review, Steam
0 Likes
We do often include affiliate links to earn us some pennies. We are currently affiliated with GOG, Humble Store and Paradox Interactive. See more here.
About the author - BTRE

Oh and the name doesn't mean anything but coincidentally could be pronounced as "Buttery" which suits me just fine.
See more from me
Some you may have missed, popular articles from the last month:
The comments on this article are closed.
2 comments
burzmali 5 Feb, 2015
I threw around 10 hours at it before getting bored. The jump mechanics are lackluster, combat is decent but nothing special, all major combats are trial and error based. I backed the Kickstarter project and I don't feel like I wasted my money, but there is little to recommend this game over Rogue Legacy or Spelunky.
0 Likes

View PC info
Picked it up this afternoon. I hadn't actually heard of it before I read this review but I'm always a sucker for pixel graphics.

I have absolutely no idea what is going on, it's rock hard, playing with the keyboard until the Xbox360 wired controller issue is sorted out is frustrating...

..and yet...there's something weirdly compelling and 'just one more go' about it. In fact, I think I'll have another go right now.
0 Likes