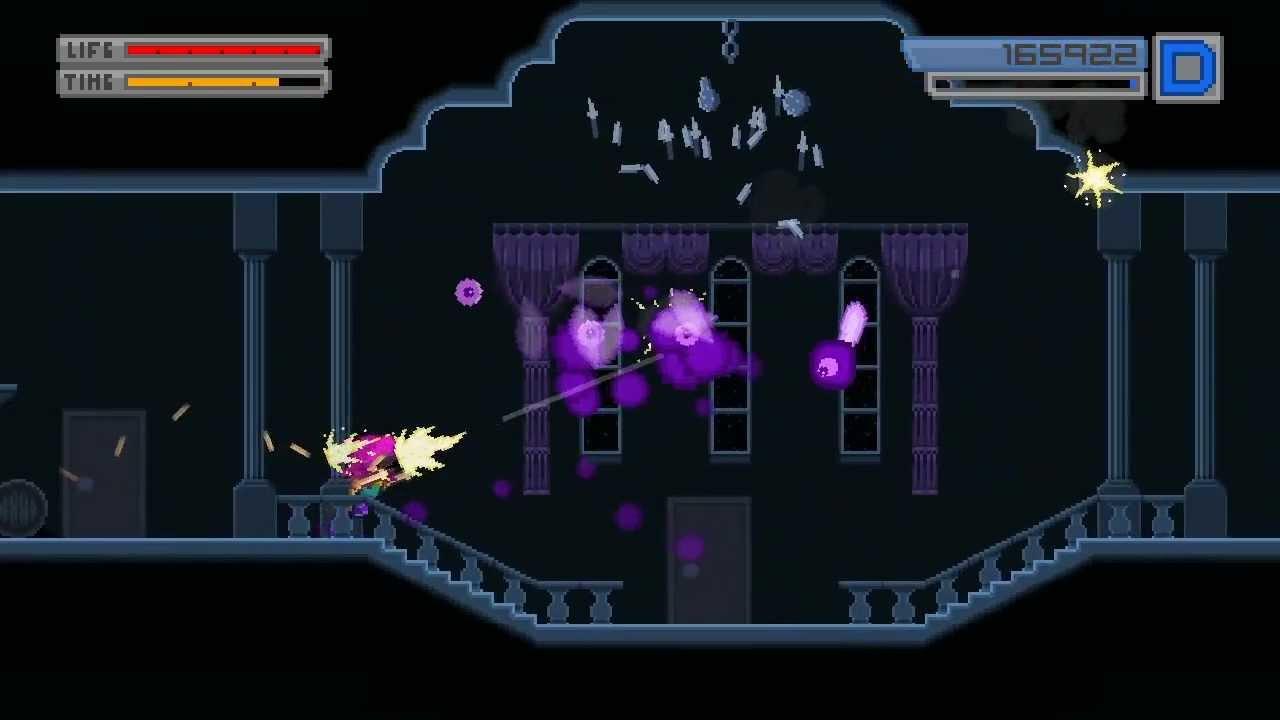 YouTube videos require cookies, you must accept their cookies to view. View cookie preferences.
Accept Cookies & Show   Direct Link
Bleed is an indie bullet hell shootem-up platformer by Bootdisk Revolution. Originally released in 2013, the developer had stated low hopes of a native port release, but the wait for that day is now over! After showing up silently in my library, I decided to finally check it out and am very pleased to play this game!

To sum up how I feel about Bleed, I simply love it. Showing me, yet again, that no matter what a game looks like, fluid game-play shines through everything and classic inspirations can be extended upon if done right.

The game really reminds me of taking a great shootem-up like Contra and mixing it up with some dash mechanics like Mega Man X, but giving you a little more freedom in how you interact with that. You can also unlock other weapons / characters / modes as you progress, mixing up how you want the game to play out, giving it some nice replayability. With that mechanical freedom and fluidity, I can't express enough my joy to experience this game. While some of the pixel art could be criticized from a objective (IE: shading) standpoint, the music and game-play quality more than certainly make up for that.

One thing I am a little disappointed in is the co-op features are only local (all platforms), but hey, if you have a friend (unlike me), pull them in and have a grand time blasting critters to oblivion.

*Note: The Steam page states it is full controller compatible, but I cannot test this feature since I don't own a gamepad. I would like to know if this holds true for other Linux gamers who played it.

I just discovered they are also in-progress creating a sequel, Bleed 2, which I'm personally excited for.

You can find the native Linux version currently on Steam. I'm sure Desura and their website will follow suit for those DRM-free purchases as well. Article taken from GamingOnLinux.com.
Tags: Action, Initial Thoughts, Platformer, Steam
0 Likes
Share

View PC info
This game looks really nice, but I think I'll wait for them to add Linux support to their website. I really like to have a drm-free version of these games to carry out with me, and a steam one to play on my computer.
0 Likes

View PC info
Looks cool, I love me my bullet hell type games. Not that impressive graphically, but the action seems fluid and that's what's important. Wishlisted until I'm less broke :P
0 Likes
dsngjoe 20 Feb, 2015
I am glad they are bringing in to our beloved OS. I myself don't play old fashion graphics games. If I had an AMD Video Card I would be very happy to have another game I could play.

Just Kidding on the AMD.
0 Likes

Quoting: MayeulCThis game looks really nice, but I think I'll wait for them to add Linux support to their website. I really like to have a drm-free version of these games to carry out with me, and a steam one to play on my computer.

View PC info
Thanks to the kind developer, I've got a spare Steam key for Bleed to give away. It will go to the first commenter to post and explain the last time he/she bled (I mean, due to accidental causes

).
1 Likes, Who?
While you're here, please consider supporting GamingOnLinux on: