I was really tired of my old Xbox 360 wireless pad, when it was purchased for me years ago the battery it came with was half broken (it wouldn’t stay in without tacking it to the gamepad). Due to this it already started life with me annoyed with it, but it was a present, so I stuck with it. I recently decided to dump it for something better, because I can. 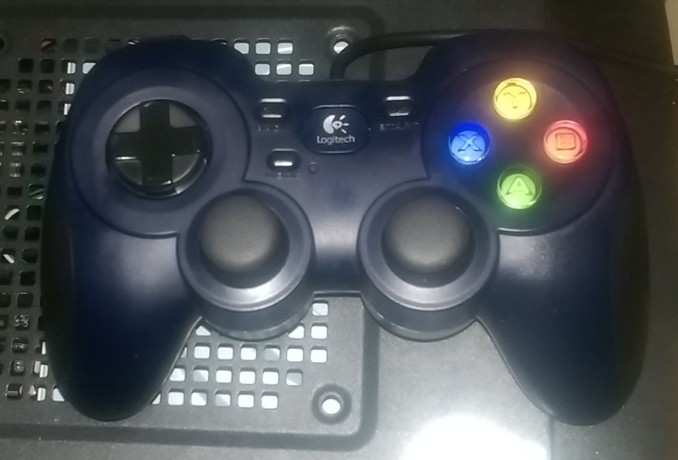 Configuration
Thanks to Steam it needed zero configuration, and worked beautifully out of the box. It even has a handy button directly in the middle which will bring up the Steam Overlay; something I wasn’t able to do on my old wireless 360 controller. Logitech do directly advertise Steam Big Picture on their official product page, so it sounds like it was designed with it in mind.

I’ve tested it outside Steam as well, and without configuring anything it seems to work just as well. I am very impressed with how easy it is to get going. That’s the most important thing after all—I want to game with it, not spend tons of time configuring it.

How does it feel?
Even with my smaller hands it still feels pretty comfortable, and fits snuggly into both hands together. I’ve used it for some pretty long sessions now, and my hands don’t end up aching like they do with my Dualshock 4. There’s practically no weight to it either, so that’s a major bonus.

The wire on it is pretty long too, to the point that I can nearly sit half a room away! I still need a slight extension to lazy with it in bed though, sadly. I shall one day be the king of PC gaming leisure, lazing it up in bed while I game.

The trigger buttons are the only parts that don’t feel quite right. I’m not sure if it’s due to being brand new or not, but the triggers feel really quite stiff. It’s not a big issue though, as they are still perfectly usable, but I do hope they become a little less stiff over time, with enough use they might, so I will just have to keep an eye on it.

The general build quality does seem great, and it feels quite strong. Feels like it might actually last quite some time even with me dropping it all over the place, and my son throwing it around. I really need to hide it away during the day!

Deadzone wise, there’s a real tiny amount of it on each stick, and I imagine that’s to stop accidental movements. You don’t want them to be overly sensitive and respond to the tiniest touch by accident, so I think the responsiveness is pretty good. It may not be the best for a fast paced shooter when you’re using something like a Sniper that needs pinpoint movement, but for everything else it should be a dream.

I’ve tested the gamepad in several games, and it performs really well in all of them. Some games like Half-Life 2 really were never designed for a gamepad, but it’s nice to have the option to use one. The original layout that Half-Life 2 gives you for this controller is a bit crap, so after some customization it’s all good, and I don’t think I had to use the keyboard since I customized it.

One thing I did find during my testing is the “mode” button seems to switch between using the D-pad and the left analog stick for movement. It confused me to no end until i realised I accidentally pressed it, which is quite easy to do. If that happens to you, that’s probably what you did.

Apart from BioShock’s setting having an inverted look up/down the wrong way around (off is inverted, on isn’t, lolwut?) the game seems to work pretty great with it. The Control layout is a bit crap, but bearable. Like with Half-Life 2, just customize as you like it.

The gamepad is just as responsive as it is in Half-Life 2, and that’s great. It has enabled me to enjoy the game some more as I sit back and watch the story unfold.

Finally, I tested it extensively in Victor Vran, and i just never wanted to put it down, but more on that in another article to come soon.

Final Verdict: If you’re looking for a well built gamepad that has a good shape, and good support in games, then go for it. For the price I think it’s fantastic, and you can find them dirt cheap on eBay.

You can find the official F310 page on Logitechs website.

Ps. What gamepad have you fallen in love with? Or are you too "pc master race" to go near one? Let me know! Article taken from GamingOnLinux.com.
Tags: Hardware, Review
2 Likes
Share

We do often include affiliate links to earn us some pennies. We are currently affiliated with GOG and Humble Store. See more here.
About the author - Liam Dawe
I am the owner of GamingOnLinux. After discovering Linux back in the days of Mandrake in 2003, I constantly came back to check on the progress of Linux until Ubuntu appeared on the scene and it helped me to really love it. You can reach me easily by emailing GamingOnLinux directly.
See more from me
Some you may have missed, popular articles from the last month:
The comments on this article are closed.
33 comments
Page: 1/4»
JOndra91 18 May, 2015

View PC info
Well, I'm pretty satisfied with Logitech F710 gamepad.
It's basically same as F310 but it's wirelless. Battery life is great.
Unfortunatelly it doesn't work with Logitech's Unifying technology and every gamepad needs it's own receiver. (I was hoping for one all-purpose nano-usb receiver which connects to any device).
0 Likes

I was having kernel freezes playing Shadow Warrior. Someone pointed out that there was an xinput issue with an unofficial patch that fixed it (as the person was having the same issue in Borderlands the Pre-Sequel).

He pointed me to https://steamcommunity.com/app/233130/discussions/0/611702631210587760/ which pointed me to http://www.spinics.net/lists/linux-input/msg31446.html "it's a kernel-patch for xpad that is supposed to fix crash that come from too much rumbling-requests." This is from may2014 and was still an issue as of last month, so I can only presume it hasnt been merged anywhere yet. My solution was to unplug my controllers anytime I play a game that doesnt explicitly require them (and as such, I've become less likely to play games that need a controller, because Im lazy).

Great controllers, but be aware that certain games in linux don't mix well with controllers.
0 Likes

On some games I have inverted look up. But generally very good. On ebay around 25€
0 Likes

View PC info
Still using an old Xbox360 wired controller. The only issue I've had with it is that Escape Goat 2 doesn't recognise it when it starts up and I have to unplug/plug the controller to get past the annoying "please use a controller" screen.

All fanstastic, and all play brilliantly with a controller.

From my console days, I'd say two or three of the most satisfying games I've played in terms of how they feel are God of War, Batman: Arkham Asylum/City, and Darksiders. I'm pretty hyped that two out of those three franchises are making the jump!
1 Likes, Who?
Madeanaccounttocomment 18 May, 2015
I have an old PC gamepad in storage that seemed to work decently for Linux when I used it a while ago. But I haven't used it for a long time as I'm happy with mouse + keyboard for my PC. Come November though I am going to buy one of those Steam controllers for my steam box because living rooms really do need gamepads in my mind.
0 Likes

Jarno 18 May, 2015
View PC info
When you say
>Thanks to Steam it needed zero configuration
are you using xpad or what?
Just trying to point that everytime when I have used xpad, there is problems in some games...
0 Likes
Skarjak 18 May, 2015
I have had strange issues using the logitech F710 controller and xpad. The sticks have a very large deadzone, but only in steam games. Games played outside of steam have almost no deadzone. It really bothers me...
0 Likes

View PC info
original Xbox controller here. Doesn't have the top two buttons above the triggers, but it works.
0 Likes

View PC info
I'm all set with my XBOX 360 pad, but in the event that ever craps out, I would consider the F310. Of course, by then, the Steam Controller might be out and worth looking at.
1 Likes, Who?
1/4»
While you're here, please consider supporting GamingOnLinux on: