When my family got its first computer in the late 80s, my parents decided that the amount of time we could spend playing games would be dictated by the amount of time we spent doing "educational" activities which involved mathematics, typing and reading. My 7 year old self cleverly negotiated text adventures like The Hitchhiker's Guide To The Galaxy or Planetfall and even more graphically oriented adventure games like The Pawn or Quest For Glory 1 into the "educational" basket, giving me effectively unlimited access to these types of games.

Twenty three years later, I still find myself enamoured with these kinds of imagination oriented experiences I like to think that players and readers connect differently with books and text adventures compared to more visual mediums where often less is left up to the viewer's mind to create.

Last week, I released an early demo of a game that tries to capture some of the things that makes those called Winter's Wake. It feels cliche to suggest that I'm reinventing text adventures (not to mention dismissive of the active and vibrant communities out there making more traditional text adventures, hypertext adventures, and other text oriented experiences), but I am creating something that is definitely distinct from them. 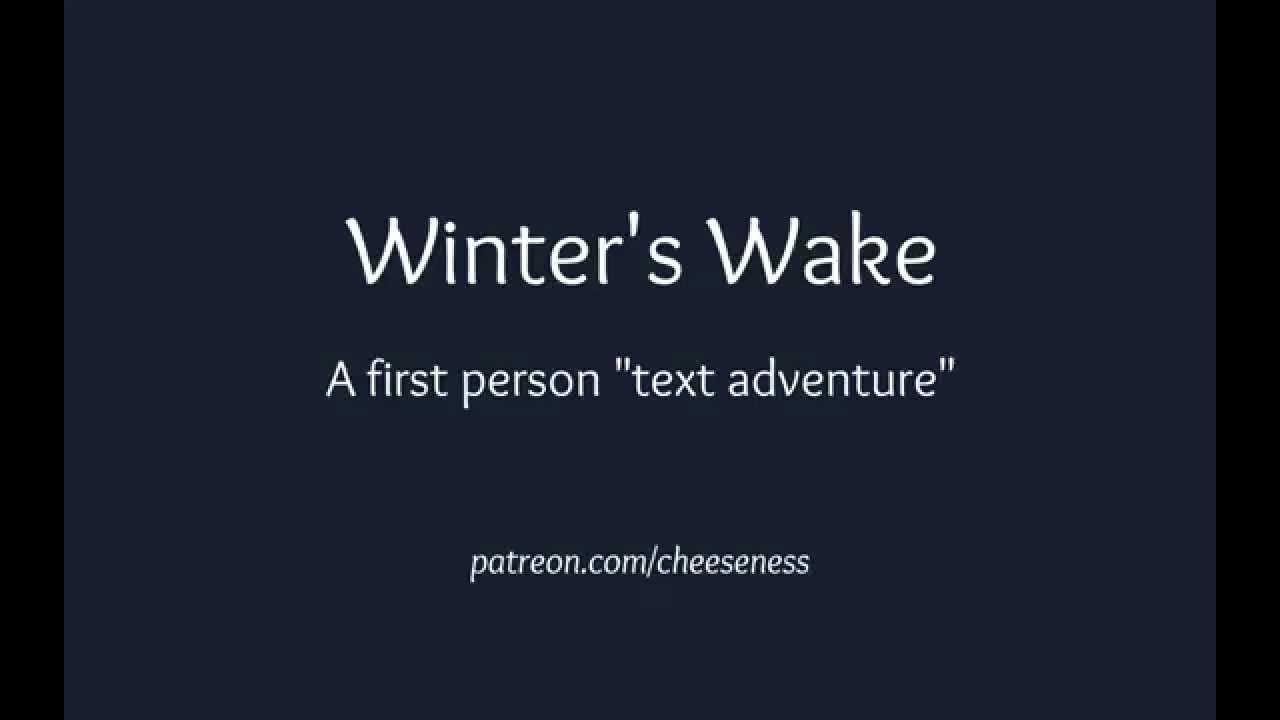 YouTube videos require cookies, you must accept their cookies to view. View cookie preferences.
Accept Cookies & Show   Direct Link
In Winter's Wake, players use first person style mouselook controls to "explore" scenes from a stationary viewpoint and solve single click adventure style puzzles. Instead of using a text parser, I'm opting for a single verb type interface that keeps things simple and HMD friendly (note: the current demo does not have HMD support, but early prototyping has been really positive!). 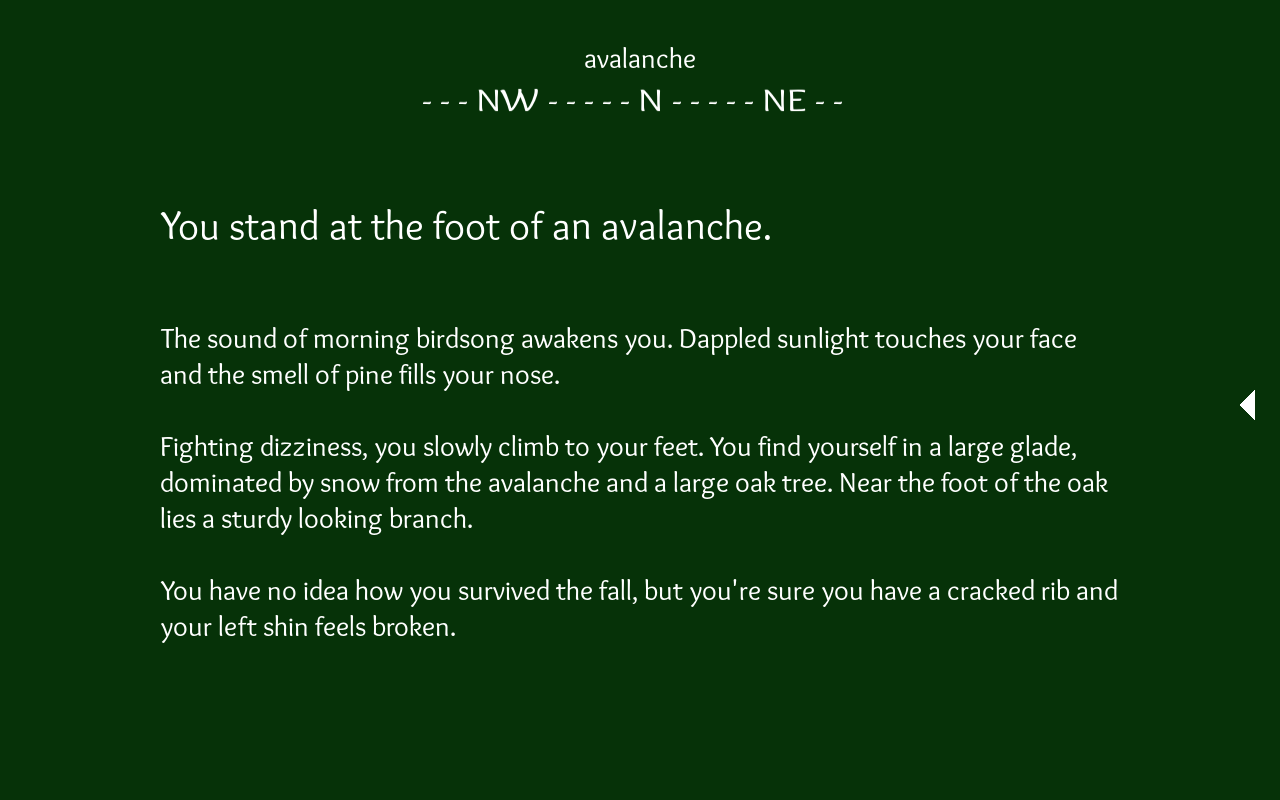 Players take on the role of a fantasy adventurer who becomes trapped in a snowy mountain pass. At the beginning of the demo, the player awakens at the bottom of an avalanche. Injured and lost, the player must make her or his way to a small village and find help.

The game provides a compass and vertical orientation indicator as well as positional audio to help players keep track of where they're "looking". In addition, the background is tinted based on the colour of what's in the player's "field of view", so a forest scene may be predominantly green, whilst a farmland scene with wheat ready for harvesting might be a mostly pale yellow. When looking up at the sky, the background is generally tinted lighter, and when looking at the ground, the tint will usually be darker.

Further orientation cues are provided by a simple positional audio system, which also helps convey transitions between scenes, as distant sounds become louder and nearby sounds becoming quiet background noise when moving away from their sources. 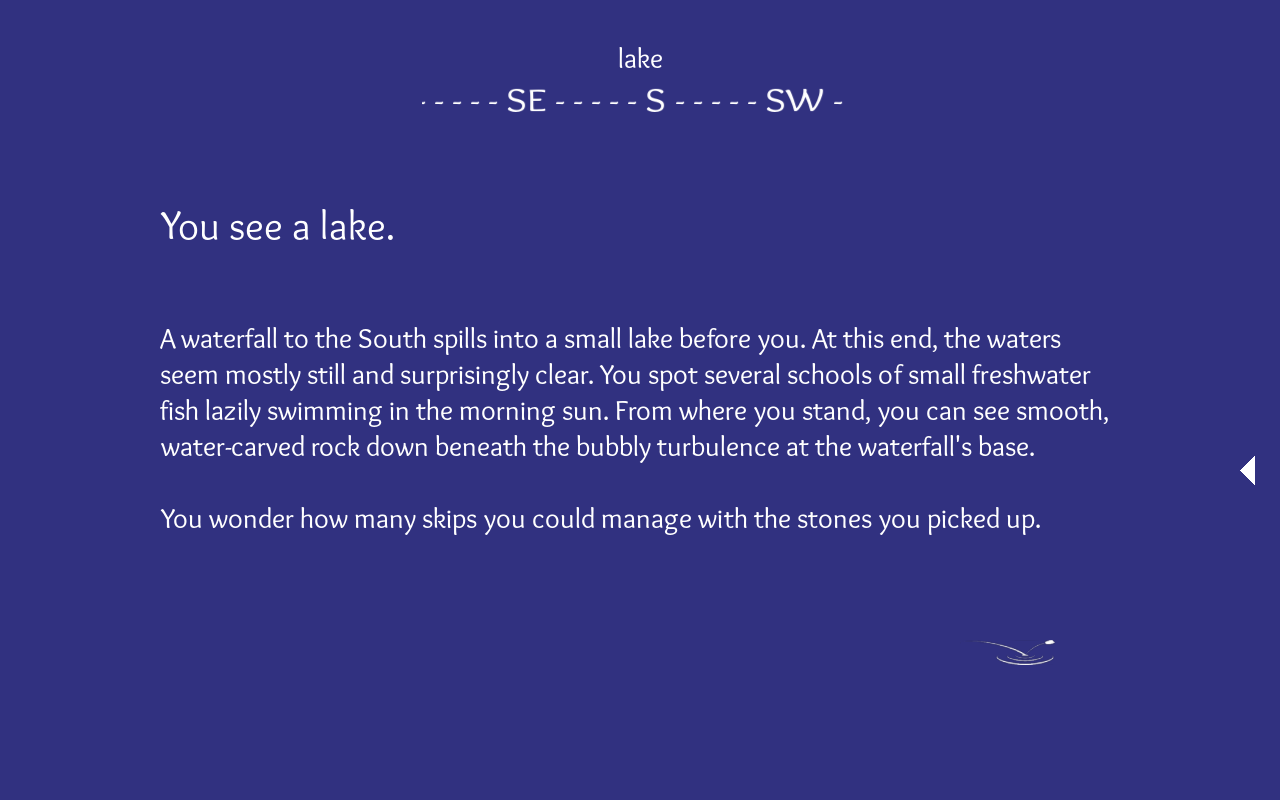 For this game, I've been working on my own engine, written (on Linux!) in C++ using SDL2 and OpenGL that I'm calling Icicle. I'm hoping to release the engine under a permissive licence for others to use to make similar (or different!) games. Alongside development, I'm also releasing some resources in the form of code examples and dev streams.

I haven't selected a date yet, but later this month, I'm aiming to do a dev stream that focuses on the design and early implementation of Icicle's state manager, which keeps track of puzzles and user actions as players progress through the game. 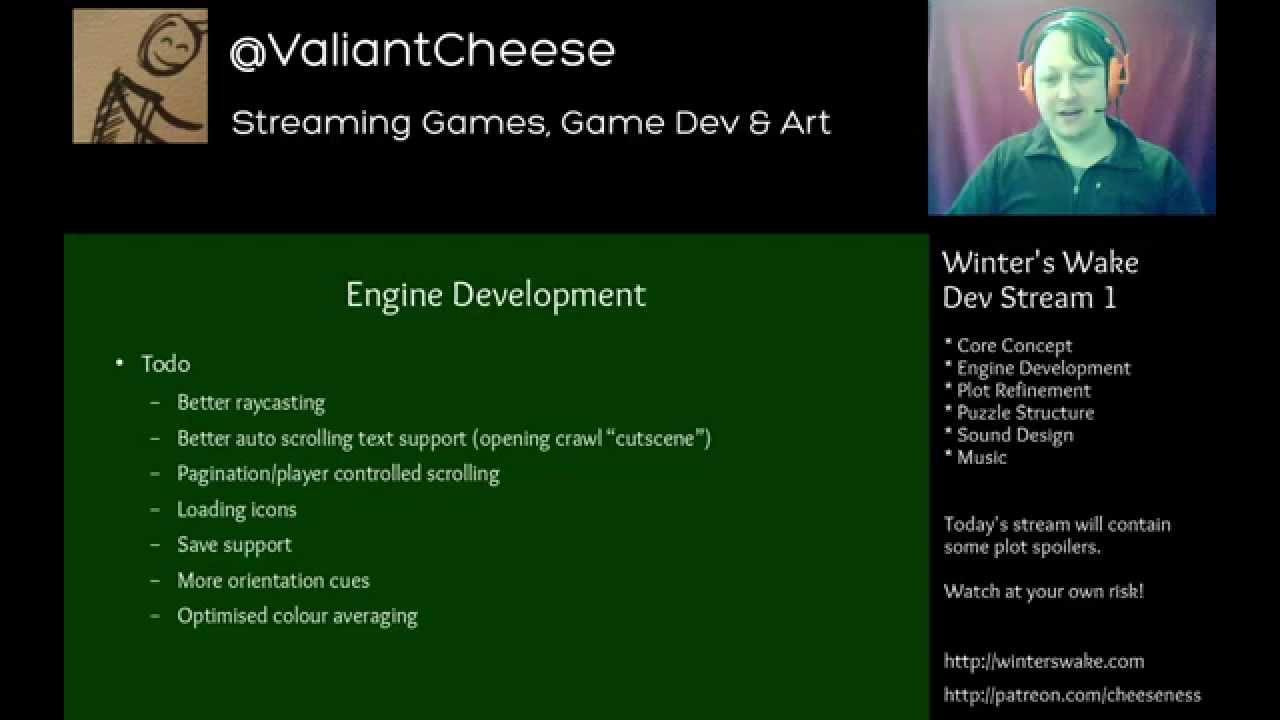 YouTube videos require cookies, you must accept their cookies to view. View cookie preferences.
Accept Cookies & Show   Direct Link
Winter's Wake has been a great project to work on so far, and I am super glad to be at a point where I can share something playable with anybody who might be interested. If you play the demo, I'd love to get a copy of the game's action log (check readme.txt for details on where to find it), which contains details on what players look at/interact with and the time they spend in each scene.

GamingOnLinux.com accepts articles (like this one!) from developers and other creators. If you're making something that you think is interesting, tell us about it! Article taken from GamingOnLinux.com.
Tags: Adventure, Demo
0 Likes
Share

I do more stuff than could ever fit into a bio.
See more from me
Some you may have missed, popular articles from the last month:
The comments on this article are closed.
9 comments
Ignis 10 Aug, 2015

Where am I supposed to send the logs again? (o.o) Well, anyway: http://pastebin.com/HH0q6nCH

A bit disorienting at first %) Overall, I'm not sure, somewhat interested, though. Kind of interesting idea. Although I miss backgrounds (at least in key places), but "no graphics" (other than item icons) was the point, I suppose.

What does HMD mean?
0 Likes

HMD = Head Mounted Display. I recall Cheeseness doing a nice article on Oculus, before they went to the dark side.
1 Likes, Who?

Thanks for that! My email address is in the readme.txt that accompanies the game, but pastebin is fine too :)

Quoting: IgnisA bit disorienting at first %) Overall, I'm not sure, somewhat interested, though. Kind of interesting idea. Although I miss backgrounds (at least in key places), but "no graphics" (other than item icons) was the point, I suppose.

Yeah, it's all about having something that exists in the player's mind rather than on the screen. This demo is pretty early, and there are more things I'll be doing to try to help reduce disorientation as development continues.

Part of the reason I've pushed out this demo so early in development is so that I can start to gauge how people outside of the development team are coping with a "new" way of interacting with a game, and that will give me extra insight when making decisions on how to improve the experience. "Somewhat interested" sounds like a win from here :)

HMD = Head Mounted Display. I recall Cheeseness doing a nice article on Oculus, before they went to the dark side.

With my initial prototypes, I've been targeting OpenHMD in the hopes of having something that's device agnostic. SteamVR is also on my radar :)
0 Likes
Ignis 11 Aug, 2015

Yeah, I've mentioned it for other readers.

Yeah, I've mentioned it for other readers.

TheMagazine 11 Aug, 2015
View PC info
I've never played anything quite like this before but I like the look and feel of the game- or the demo at least. Be sure to post an update when you finish it Cheeseness!
2 Likes, Who?

Quoting: TheMagazineI've never played anything quite like this before but I like the look and feel of the game- or the demo at least. Be sure to post an update when you finish it Cheeseness!

Thanks! I'll be sure to keep people updated :)
0 Likes

View PC info
For anybody who's interested, I did a dev stream yesterday looking at the demo and how the game handles puzzle logic. An archive can be found here :)
0 Likes
While you're here, please consider supporting GamingOnLinux on: