By Cheeseness - 3 September 2015 at 8:49 am UTC | Views: 12,269
It's not often that I get excited about seeing "FOR IMMEDIATE RELEASE" in my in-box, but today's announcement that Assault Android Cactus has a set release date just three weeks away put a grin on my face.

On September the 23rd, Australian developer Witchbeam will be releasing their intense sci-fi twin stick shooter Assault Android Cactus on Steam and Humble Store for Linux, Mac and Windows. The release date trailer below unveils the game's opening cutscene in which Jr Constable Cactus calmly and professionally boards the Genki Star to take command of the situation. 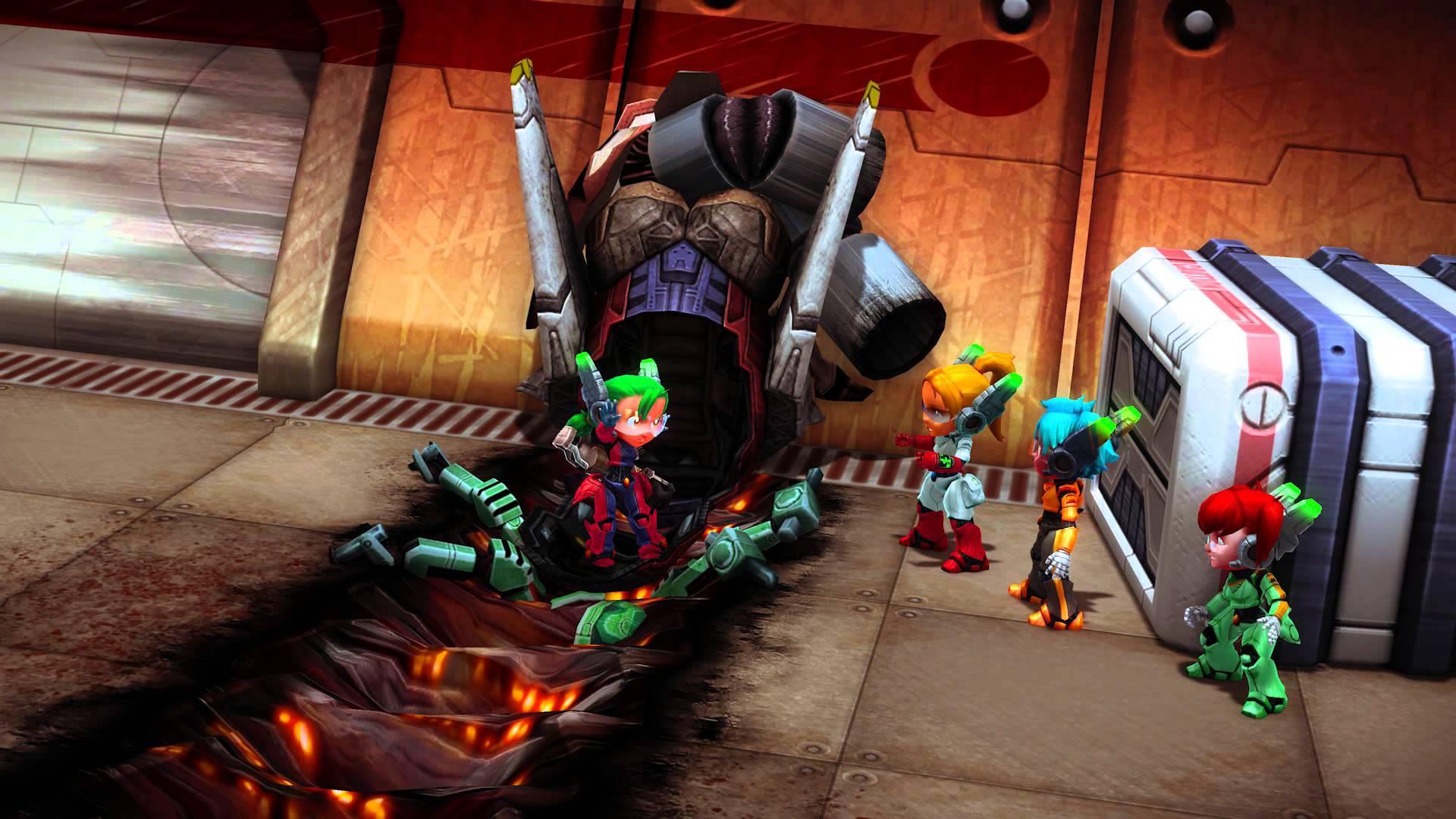 YouTube videos require cookies, you must accept their cookies to view. View cookie preferences.
Accept Cookies & Show   Direct Link
In this article, we're going to reflect a little on the kind of Early Access experience that this local co-op "bullethell-lite" shooter has provided. For some more detailed thoughts on the game itself, check our previous coverage, in which we interviewed one of the developers and dug deep into what makes AAC unique.

It's hard to believe that it's been just over 2 years since Assault Android Cactus entered Early Access and gave players an opportunity to witness and give feedback on the game's development, and it's been an enormous pleasure to watch the team's efforts form what I can only describe as one of the best examples of an Early Access game done right. 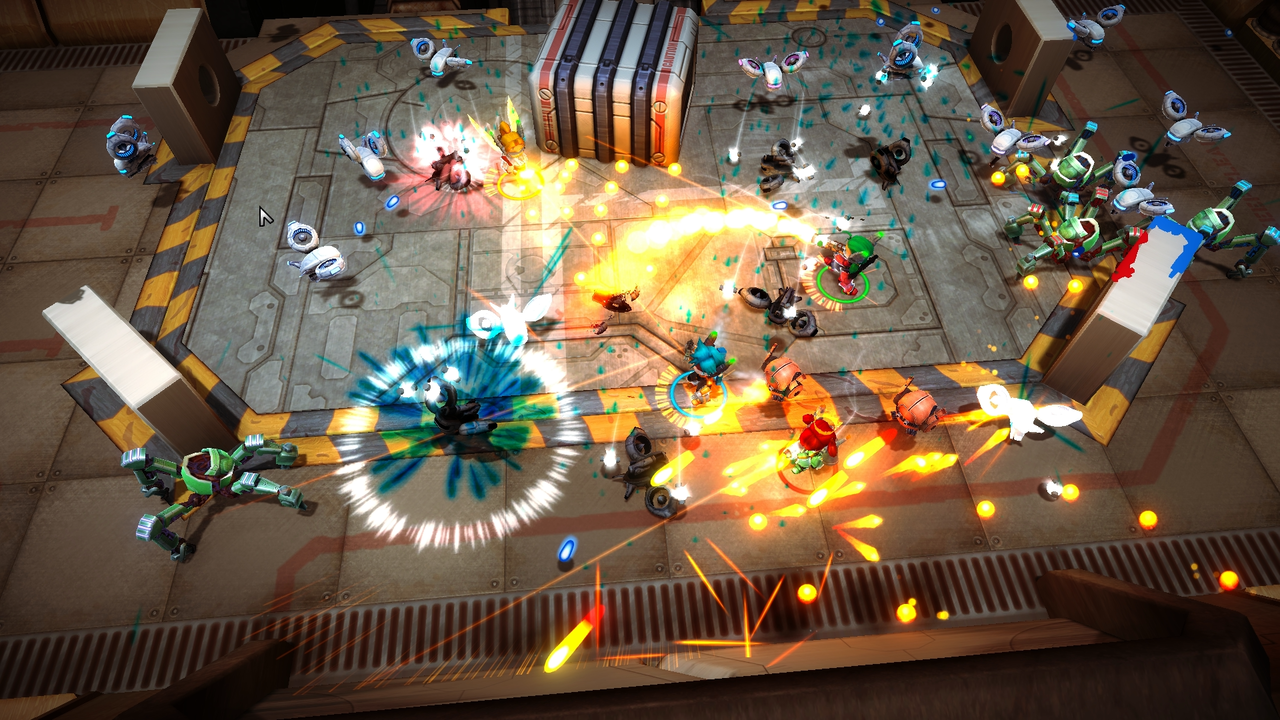 The developers have been approachable and responsive on the game's Steam Community Hub, to the extent that over time I've come to consider them friends. Over time, it's become clear to me that Tim, Sanatana and Jeff care greatly about Assault Android Cactus' players. Their uncompromising commitment to releasing a game that does justice to their original vision truly stands out, when at many stages during its development, AAC could have been considered strong enough to move out of Early Access.

From the very beginning, AAC presented a solid gameplay experience and high level of polish across a small range of levels (7 levels plus a boss and tutorial level). Sitting alongside untextured, in-development "white box" levels, this helped set the right kind of expectations for the direction the game was headed in. 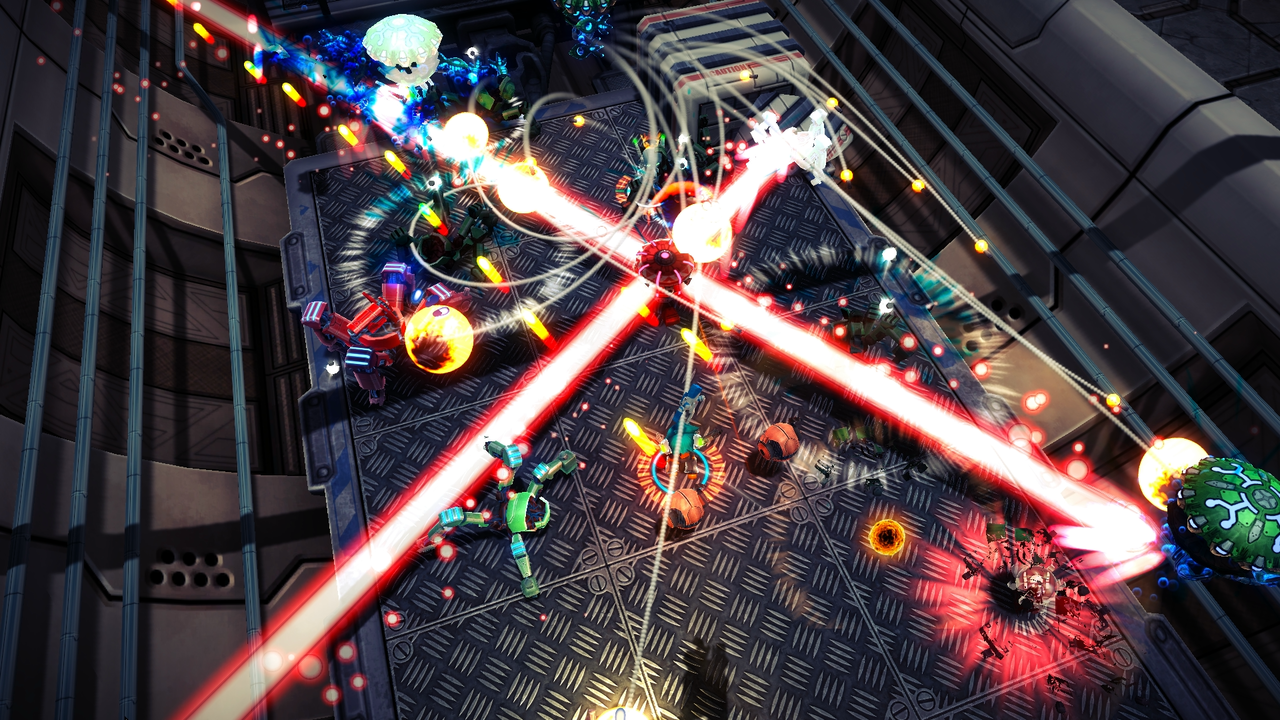 Across the past two years, I can only recall three occasions where a significant bug had crept through, and with one exception, they were dealt with within a couple of days. In the current Early Access build, certain gamepads aren't mapped correctly unless the SteamOS xpad driver is present (many distros have third party packages available to bring in SteamOS xpad driver changes that haven't yet filtered upstream). The final release build includes additional gamepad profiles that the developers are hoping will resolve this for affected players.

It's been fantastic to watch the way the game's levels, characters and general style have been fleshed out and fine tuned over the time. I can remember when the level selection screen was a 2D array of buttons with level names on them. Today, each zone is its own small 3D hub environment that evokes a sense of the Genki Star's size, where players guide their characters to the desired level. Levels like Assembly and Convection have evolved from visually bland explorations of gameplay into full experiences with compelling atmosphere and unique styles. Characters like Aubergine have had their combat controls tuned and adjusted over time in response to player feedback and to behave better with new level and enemy gameplay. 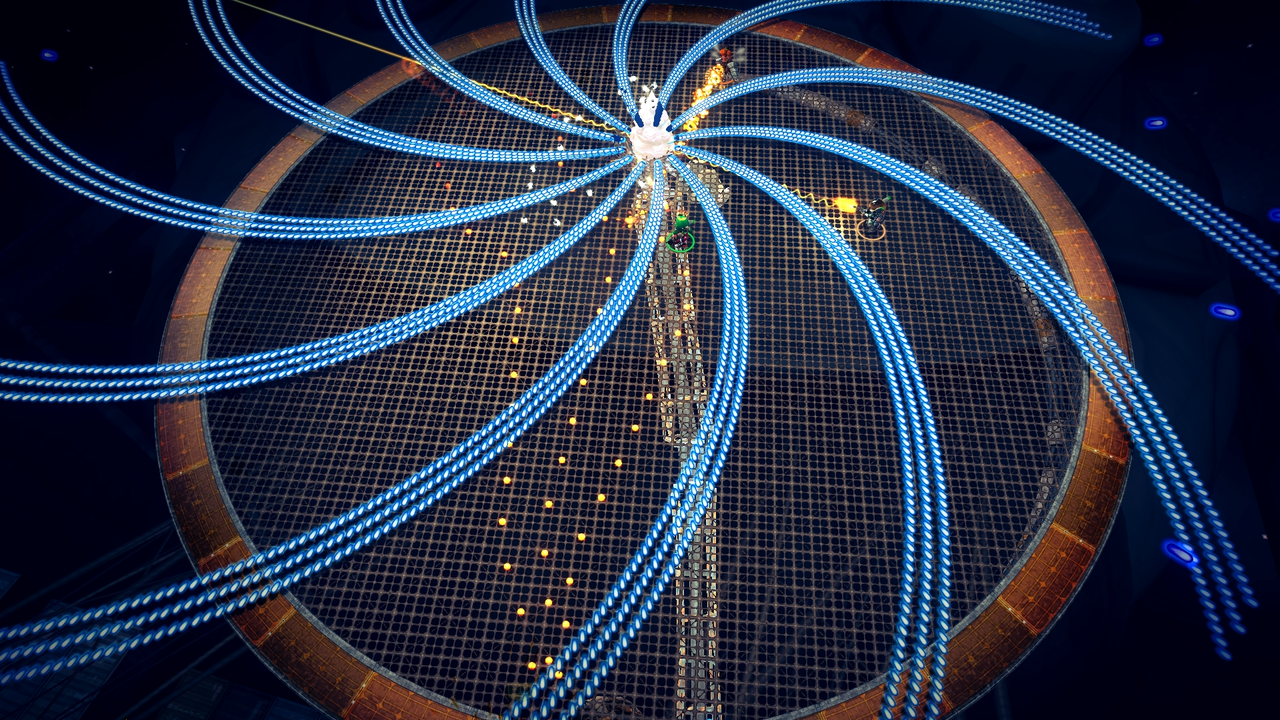 The evolution of the game's audio has been particularly interesting, with award winning composer Jeff van Dyck (responsible for Hand of Fate's music, and had a hand in Alien: Isolation's) giving AAC's soundtrack and effects mix as much iteration, tuning and polish as the rest of the game. In particular, the recent addition of live guitar performance has been a pleasant surprise that rounds out the soundtrack well.

Content has steadily been expanding over time, with 18 major content updates across the game's development. The current Early Access build now featuring 21 levels and 5 bosses spread across 5 visually distinct zones, plus four unlockable characters in addition to the core four protagonists. Over time, AAC has also accumulated: 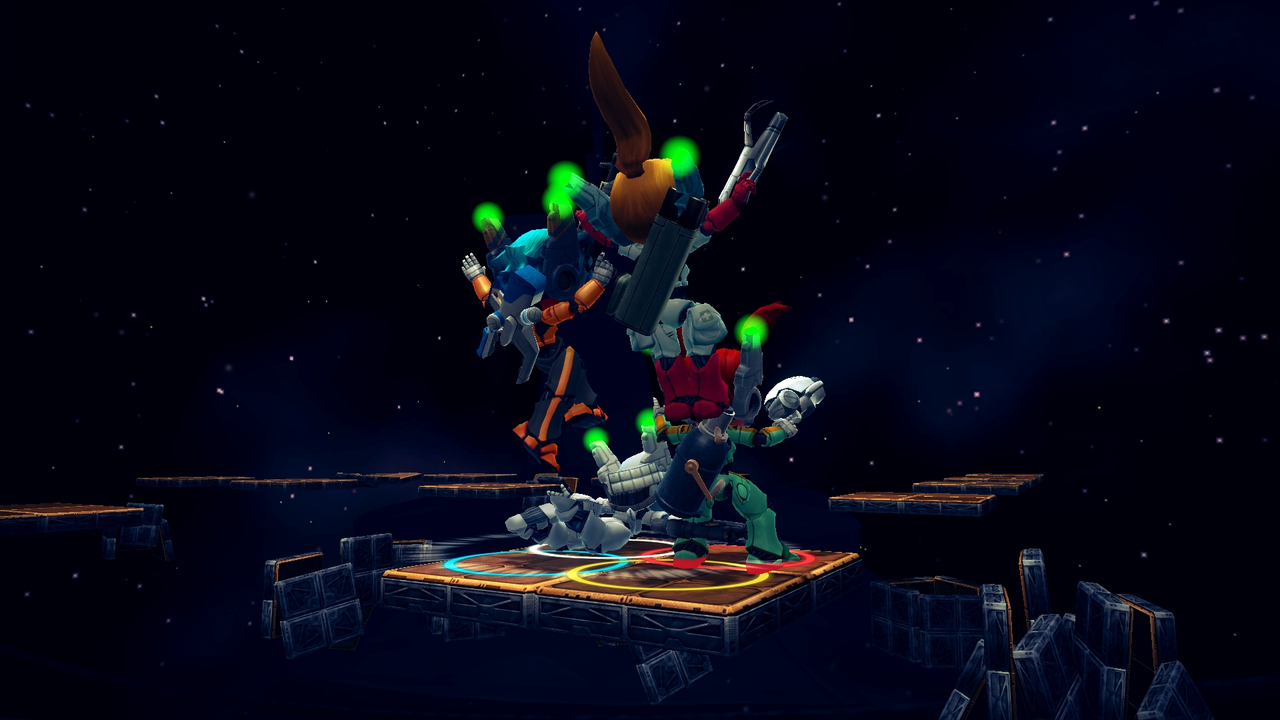 In the final release, players will be able to look forward to several cinematic cutscenes that round out Cactus' story, four new EX Modes, an additional unlockable character (whose identity is yet to be revealed), and a few bits of extra polish here and there. The soundtrack should also become available to existing Deluxe edition owners and for purchase around the same time.

The Early Access version of Assault Android Cactus can be purchased ahead of its September 23rd release date from Steam and Humble Widget on the AAC website, and a playable demo can be found on Steam as well. If it sounds like something you'd enjoy, check it out! Article taken from GamingOnLinux.com.
Tags: Action, Arcade
0 Likes
Share

I do more stuff than could ever fit into a bio.
See more from me
Some you may have missed, popular articles from the last month:
The comments on this article are closed.
17 comments
Page: 1/2»

Eike 3 Sep, 2015
View PC info
It's not my cup of coffee, but judging from the demo I think it is very well executed.
0 Likes

Quoting: EikeIt's not my cup of coffee, but judging from the demo I think it is very well executed.

If the game doesn't feel like your sort of thing, it's not so relevant, but the demo itself is a bit out of sync with the full game (according to SteamDB, it looks like the demo was last updated 6 months ago).

I believe that it's still very representative of the core gameplay (even the July 2013 build I was playing this morning in preparation for writing this article stills feels very "Cactusy" to me), so it's worth checking out :)
1 Likes, Who?

View PC info
Uh oh, link to Steam broken. And this is totally my cup of tea. Or coffee. I take both. :)
1 Likes, Who?

Quoting: LinasUh oh, link to Steam broken. And this is totally my cup of tea. Or coffee. I take both. :)

Fixed. Sorry about that!
0 Likes
tartif 3 Sep, 2015
I tried this game a year ago and found it enjoyable but overwhelming. Is there a difficulty slider or "easy mode" in the current version?
0 Likes

View PC info
What is odd is that this genre is called twin stick shooter, but it plays MUCH better with a mouse and keyboard... almost on a FPS kind of level.

Great game though, recommended to anyone who likes such arcade games.
1 Likes, Who?

View PC info
I very much enjoyed the demo when I played it super long ago. However, the lack of online co-op gives me pause. I'd buy it without hesitation if it had online co-op, but it doesn't and that's borderline deal-breaker for me. :(
0 Likes

Quoting: tartifI tried this game a year ago and found it enjoyable but overwhelming. Is there a difficulty slider or "easy mode" in the current version?

I don't think there is. Looking at the reactions that new players have had, it feels like there's a point at which the game "clicks" for some players and becomes much easier (often along with a realisation about how the battery mechanic works).


Quoting: liamdaweI've been sent a key for it, so expect to see more of it in videos/livestreams :)

I'm also planning to get back into streaming and will be streaming the Daily Drive most days :D


Quoting: JuliusWhat is odd is that this genre is called twin stick shooter, but it plays MUCH better with a mouse and keyboard... almost on a FPS kind of level.

I've found this too. I find the gamepad so cumbersome (but other players swear by it). I think that the game stands up as a super solid keyboard and mouse experience in spite of it being specifically designed for gamepads speaks volumes about the developers attitudes towards making sure that the game is well rounded.

View PC info
Is a very nice game the only thing is missing is on line coop + a workshop to make levels and bosses :)
I have play it on the very early access and I thing I stuck on the last boss......

I may play again the whole campaign after release...

For me a wireless gamepad is a must for this game, lay back on your couch or comfort chair and start playing...


Last edited by wolfyrion on 3 September 2015 at 11:12 am UTC
0 Likes
1/2»
While you're here, please consider supporting GamingOnLinux on: