By flesk - 16 December 2015 at 9:27 pm UTC | Views: 9,912
Volvox was released on Steam last week and instantly caught my attention because of its appealing watercolor painted look. Having a lot on my plate at the moment, I hadn't yet had a chance to check it out, but thanks to a key from the developer, I now have. 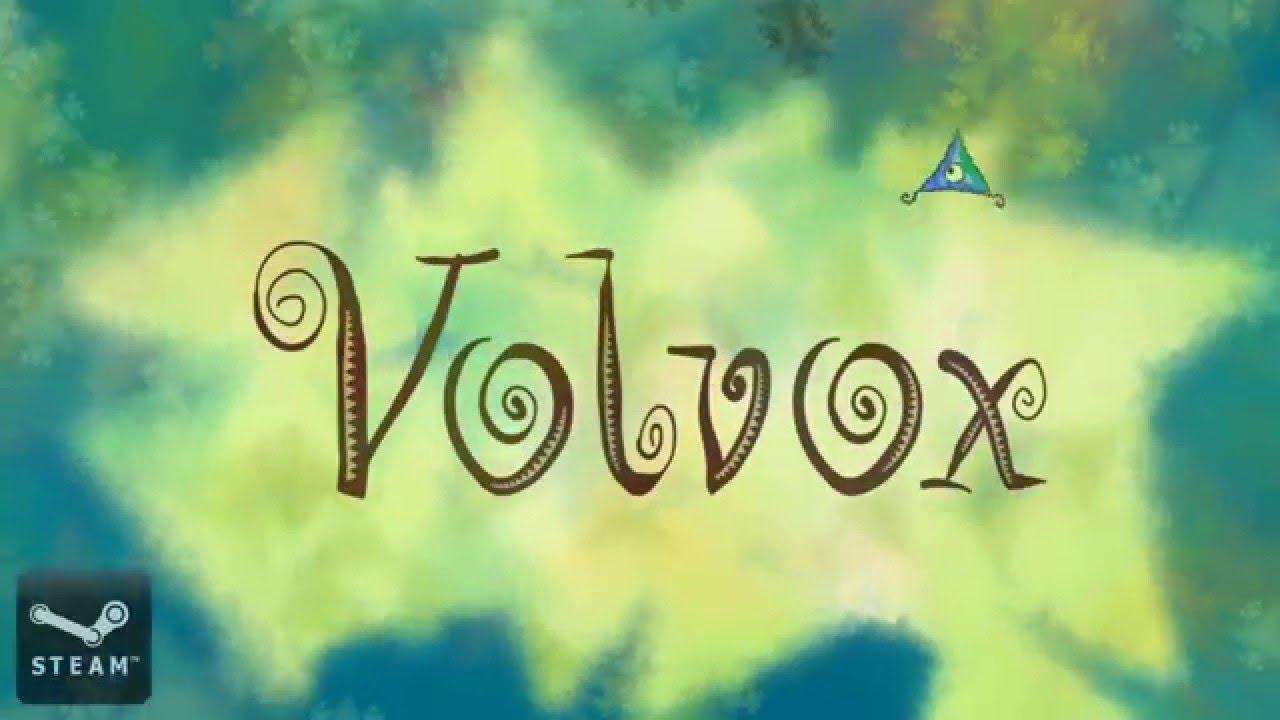 YouTube videos require cookies, you must accept their cookies to view. View cookie preferences.
Accept Cookies & Show   Direct Link
The game is played by moving triangular creatures called Trimoebas on a triangular grid. These creatures can have certain properties on each of their sides, including glue, insulators and explosives. Pieces of terrain often have some of the same properties, and you'll have to plan your moves carefully to avoid rendering the puzzle unsolvable. A side covered in glue will stick to any surface not protected by an insulator. The objective of each level is to line up all green sides of the Trimoebas with corresponding green silhouettes on the grid.

A Trimoeba can roll into the next unoccupied triangle in either direction, but it can't be flipped or rotated in place, so the challenge is to make its sides line up to where you want them to be. This quickly gets complicated when you have many Trimoebas and several of them need a specific orientation to fulfill their purpose. 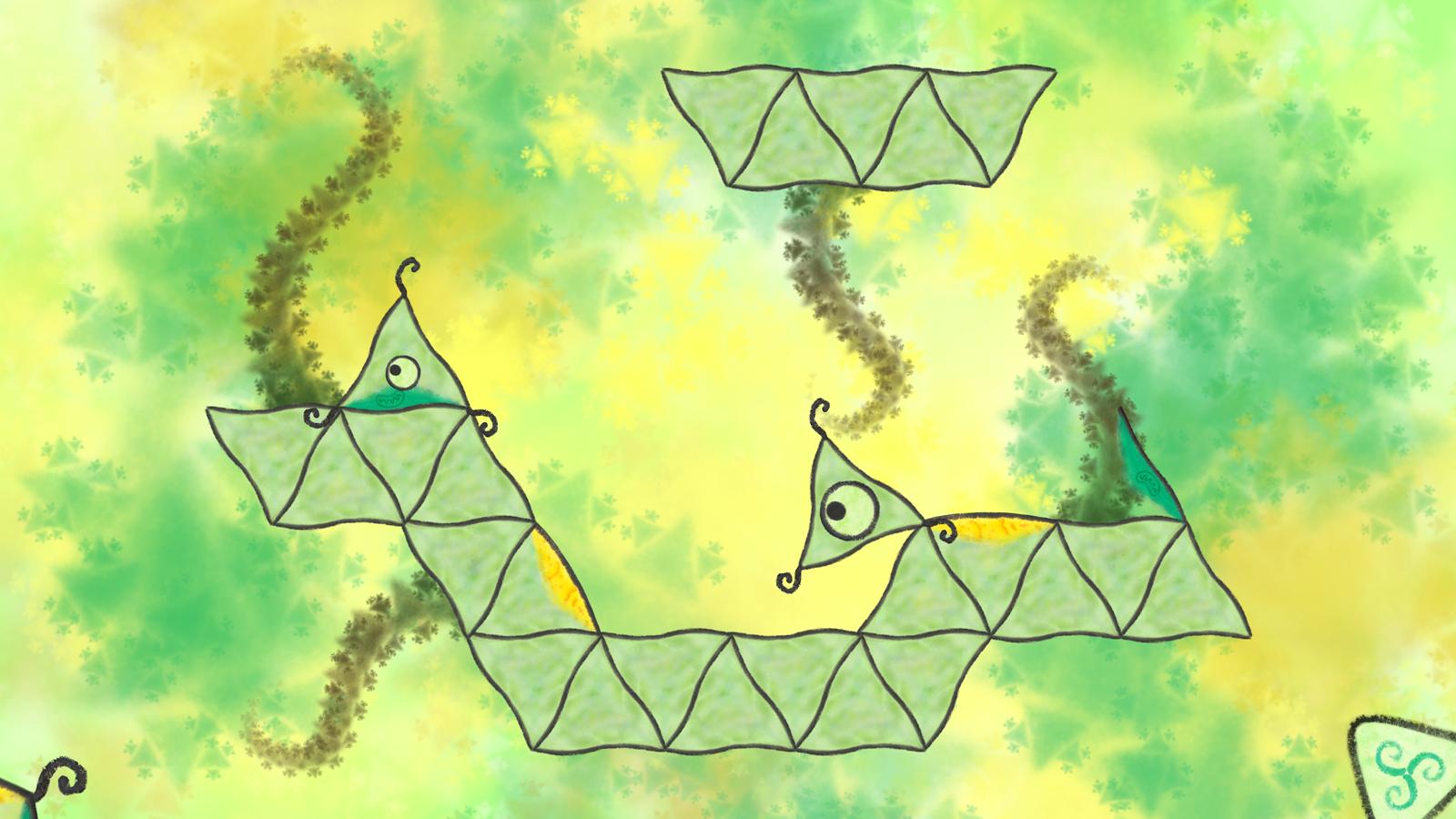 One thing I haven't come to grips with yet is how to best control the game. At first, when there were few Trimoebas to worry about, using arrow keys to flip and space bar to switch between them was simple enough. When you begin to get more than a handful of Trimoebas though, using keyboard controls to change the active Trimoeba starts getting increasingly awkward. You can play using only a mouse as well, but click-and-drag to move feels a bit cumbersome in my opinion. Using both mouse and keyboard is perhaps the best option, but I prefer using just one peripheral for 2D puzzle games.

The game is very challenging, and after playing it for almost an hour, I've only managed to complete the 24 levels of the first set plus a couple of levels of the second. There are 250 puzzles in total, and to be honest, the thought of it feels a bit overwhelming. I am still enjoying it, but I think Volvox is likely to be a better fit for someone with a more systematic approach to puzzle solving than my usual haphazard strategy of trying to visualize everything at once.

If you're not sure if this game is for you, there's a slightly outdated WebGL demo available, containing 15 levels of the game. And if you like what you see, you can buy Volvox on Steam.

About the game (Official)
Volvox is a puzzle game based on a triangular grid. The characters, called Trimoebas, are triangular unicellular animals undertaking the building of the first multicellular beings, traveling through the evolution. The Trimoebas bear functional properties on their sides, such glue to build, explosive to dig and hooks to climb, but these properties work only if the Trimoebas are correctly rotated: you will have to move on the right path and make the Trimoebas overstep each other to complete the mission.

I run the Hidden Linux Gems group on Steam, where we highlight good indie games for Linux that we feel deserve more attention.
See more from me
Some you may have missed, popular articles from the last month:
The comments on this article are closed.
12 comments
Page: «2/2

Hey Sumero, thanks for the demo and posting about it here!

Some quick notes:
- The game page on Steam doesn’t have the "Download demo" button.
- The demo works! :) On my Gentoo / nvidia system.
- I selected windowed and "Good" quality, and the game doesn’t do vsync. A vsync option would be good as the game is using a lot of CPU time to draw 1800 frames per second at the moment.
- The French translation contains many errors and sometimes even doesn’t make sense.
- I wondered how to exit the options page for a while… it’s not obvious you have to click the big black disc.
- The message at the end of the demo isn’t translated.
- I got twice an error popup "couldn’t open browser". It’s not the first time an Unity 3D game gives me that error, so I think that Unity is broken and you should use the "xdg-open" command instead to open URLs in the player’s default web browser. As far as I know xdg-open is available in most Linux distros.
- The tutorial is well made and easy to understand with progressively more difficult levels…
- At the end of the demo it might seem like there are only 9 levels left to play. I assume there are more, but a clarification couldn’t hurt ;).

I like the game so far. The music is very nice. I wonder how hard the levels will get though.
0 Likes
Sumero 8 Jan, 2016

View PC info
Many thanks for your feed stan! :)

My French translator is mothertoungue, and if there are errors probably she haven't understood the original meaning of labels or instructions. Could you please notify me the errors that you remember? (if you want, via info@neotenia.org)

I'm trying to fix some other problems :)

Thanks!
0 Likes
«2/2
While you're here, please consider supporting GamingOnLinux on: