Some thoughts on Factorio after a few hours with it, blown away by it 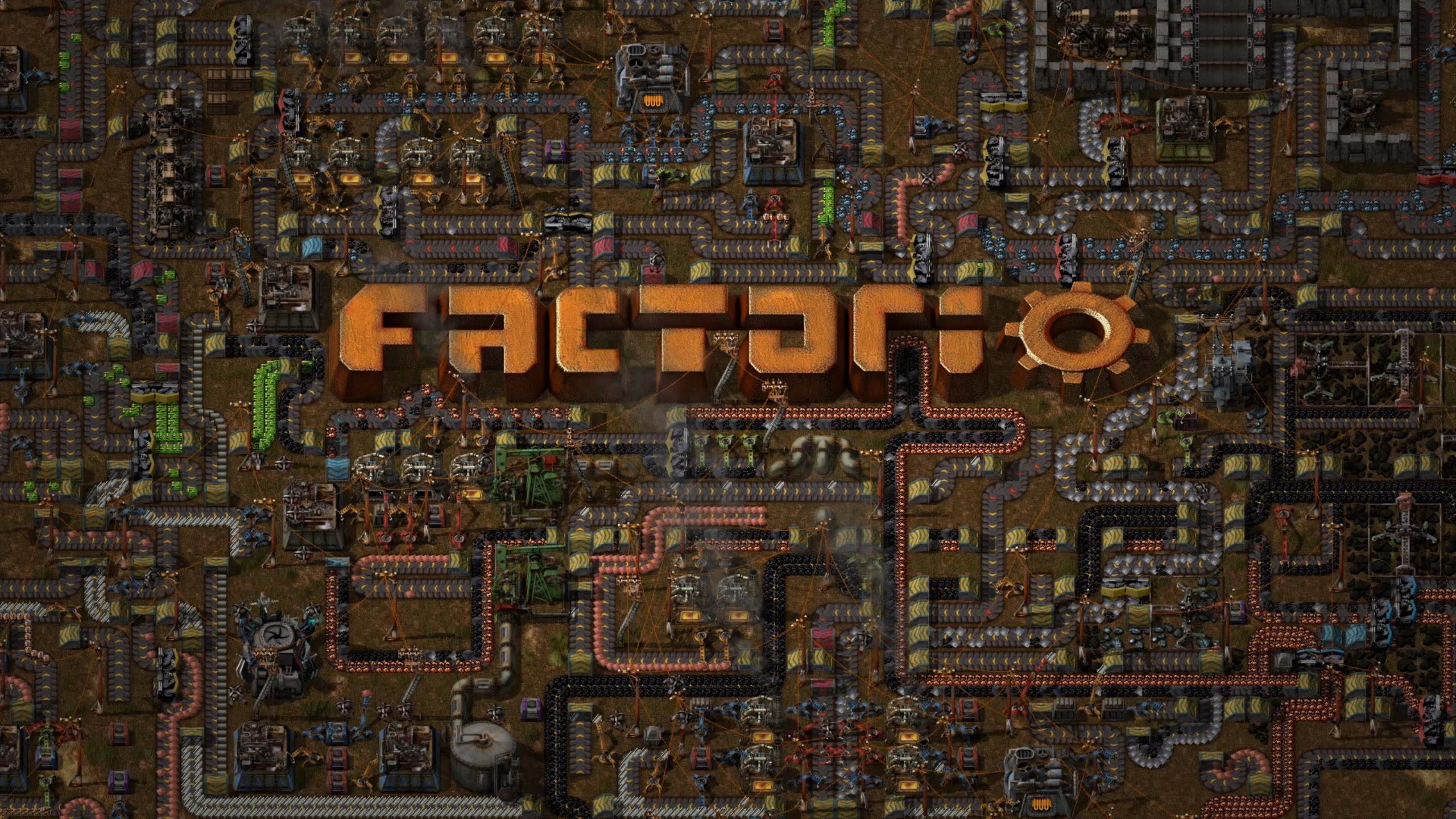 YouTube videos require cookies, you must accept their cookies to view. View cookie preferences.
Accept Cookies & Show   Direct Link
After picking up Factorio based on some users high praise of it, I have ended up putting way more hours into it than I thought possible. Here’s some thoughts on it.

I did two tutorial missions and instantly recommended it to Samsai, and he went ahead and purchased a copy too. How’s that for word of mouth advertising eh? 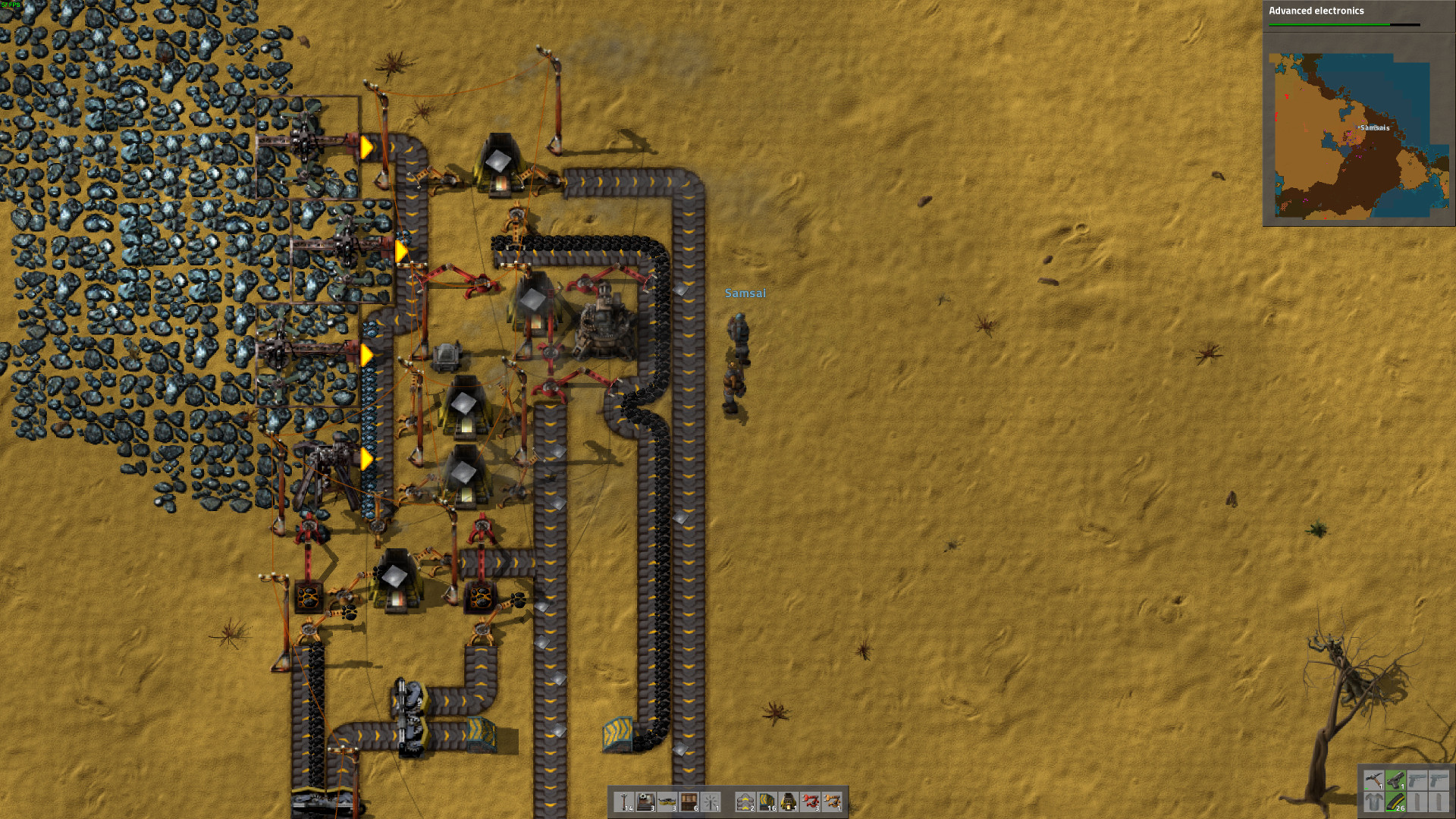 The idea is simple, you're on an alien planet, you need to build lots of stuff to survive and aliens want to eat you. It sounds like a weird combination, but it bloody works. It’s a weird mix of sandbox factory building with tower defence elements thrown in for good measure.

It has the usual mechanics you find in other survival games like mining various resources and crafting, but it’s a very different breed of game to Minecraft, Terraria or Starbound.

What I like about Factorio is that you can go at whatever pace you like, and the building mechanics are not overly complicated. I'm going to be brutally honest here: I don't consider myself all that smart, especially so when it comes to puzzles and problem solving, but Factorio delights even me with how impressive the assembly line stuff is. And how accessible the game's basics are to a dunce like me.

It took me about 30 minutes to complete even the second tutorial level for learning the basics. I probably did it all wrong, but I still got there and what I created looked really cool (in my mind). I ended up having assembly lines from the side and top of the map coming down to the starting area, and I had all my furnaces around the same place. So to collect resources I only needed to walk in a circle. It was awesome that it worked, but after doing it I realised I could have built assembly lines going the other way as well to put coal power back into my drills. That way I wouldn't have to wonder off when they ran out of coal power. I like the fact that this game makes me think, in a simple way.

The game quickly introduces more and more to get your head around, but still surprisingly able to keep it all simple. By the next tutorial mission you're introduced to electricity using water pumps, a bunch of boilers to heat it up and then a Steam Engine, a day and night cycle and a new weapon. The tutorials certainly don’t waste any time!

This game really does make me feel smart. After spending a number of hours in the game, coming up with inventive solutions to logistics problems does make you feel pretty good about yourself.

Myself and Samsai have played rather a lot of it online together since picking it up, and we have had an absolute blast on it. Our first session lasted just short of three hours, and that was solidly playing it without so much as a pee break (that’s just how good it can be). Often laughing across Teamspeak to each other at how good our ideas are, and the ridiculous amount of coal we were extracting: 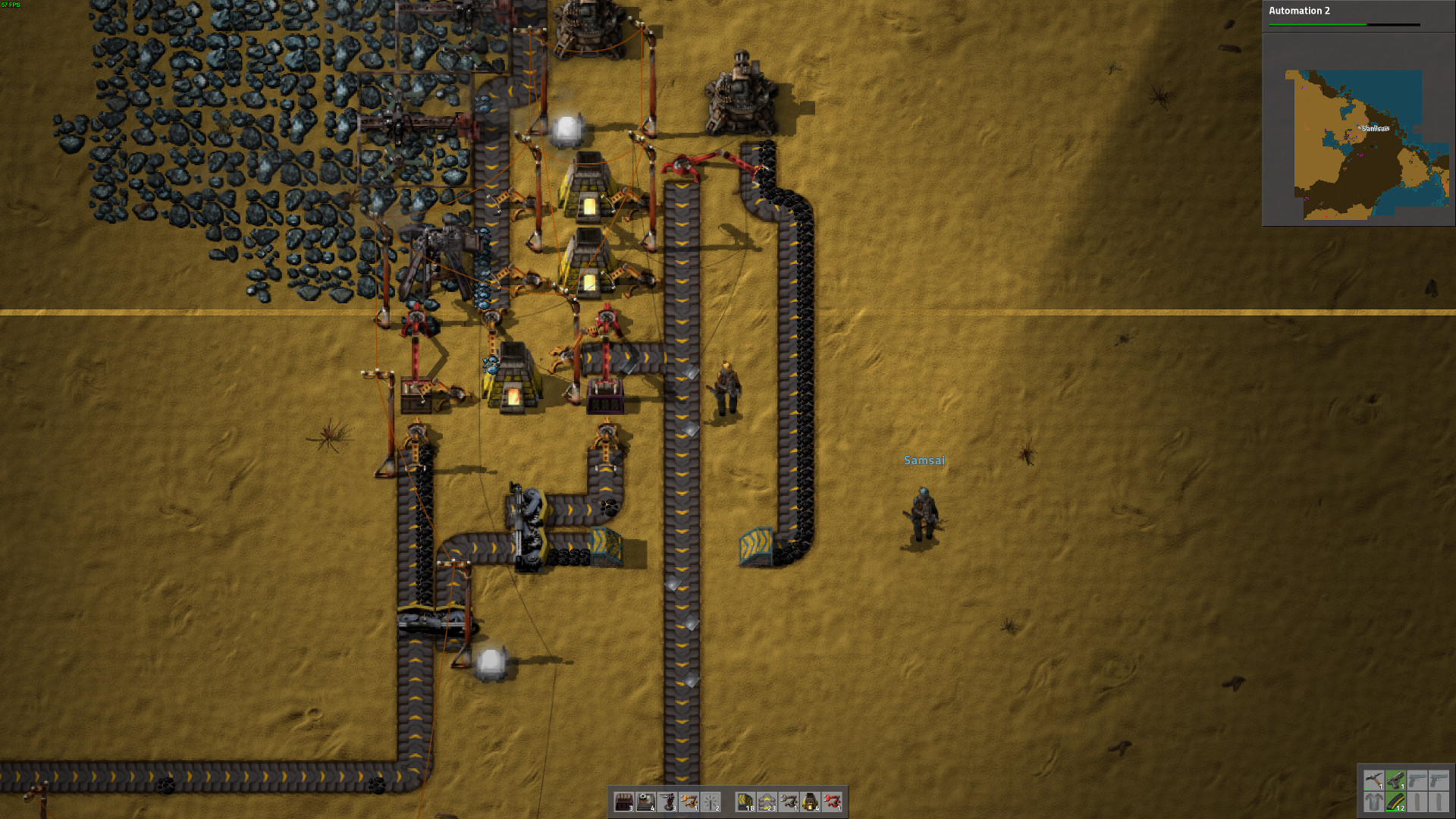 I am impressed at just how stable the online multiplayer is even at this early stage in the games life, the first time myself and Samsai tried it online together we played around three hours solidly without a problem. That’s not only a testament to how stable the online play is, but just how engrossing the damn game is too. Didn't even realise it had passed midnight while playing.

Each time we thought the game didn't have something we needed, we managed to invent our own way of doing it. That’s the awesome thing about this game, it repeatedly gets you to think and then when you think you have it right, you need to adjust it some more and come up with another solution. You end up with a lot of wacky looking designs, but they work!

Take a look at this monster Samsai factory made: 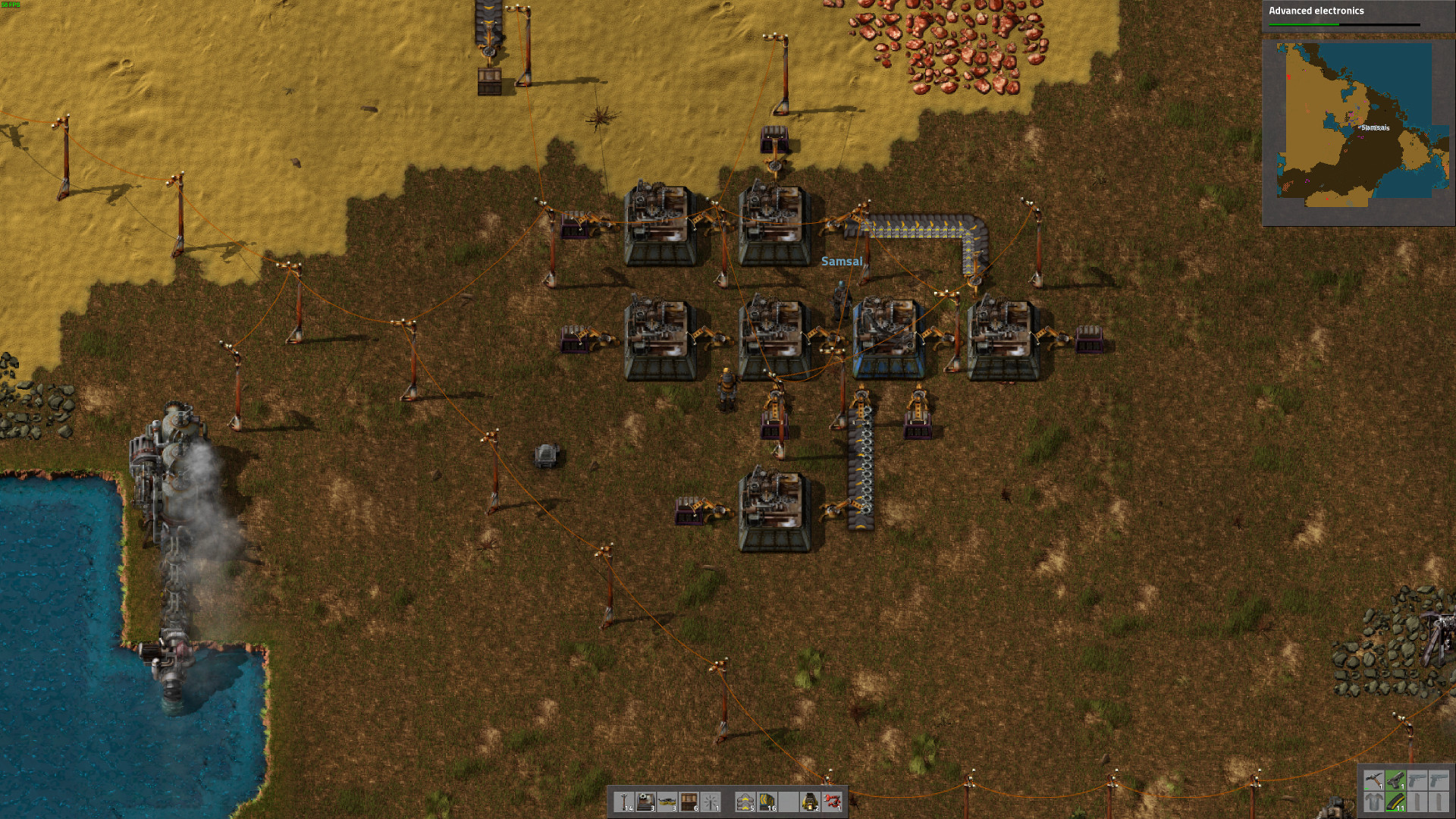 I know "Early Access" will put off a lot of people, but this is one game I am suggesting people seriously go take a look at even now.

There are some things I want in the game:
- Steam networking integration, no messing around with ip addresses
- Steam Workshop
- More defence tower variety
- More alien variety
- Alien movement, right now they are quite static, but it would be fun to see them wander off now and then and make new colonies. Having this as an on/off option would be good to satisfy the “base builder” vs “base defence” audiences the game will have.

With those changes above, I would consider the game almost perfect.

It’s extremely rare for me to get so engrossed in a game that I actually lose track of time, this game is really something.

You can grab it on Steam, or from the developer directly. Article taken from GamingOnLinux.com.
Tags: Early Access, Indie Game, Review, Strategy
0 Likes
Share

View PC info
Sir, I wasn't sure about this game... but you've convinced me. Is in my wishlist now!
0 Likes

View PC info
this looks really cool, I might have to get a copy...

it's always the best indie games that are in early access it seems for me anyway. still waiting on planet explorers and starbound to be completed before I sink more time into them, even though I've already spent some 200+ hours on each.
0 Likes

Quoting: ertuquequeSir, I wasn't sure about this game... but you've convinced me. Is in my wishlist now!

View PC info
Well, factorio is definitively worth your money.
I cannot not recommend it (double negative ⇒ you should buy it).

By the way, factorio is currently on top of list of Steam games when sorted by user rating.

View PC info
I played it with my friend for some time and here are some tips:
-aliens will be more agressive and will attack you depending on your air pollution
-smoke from your factory will reduce solar energy production if it is right over solar panels
-someone calculated optimal accumulator/solar panel ratio (solars works only during the day) here
-some screens from our gameplay here and here
1 Likes, Who?
kazriko 4 Mar, 2016
View PC info
The aliens actually do animate quite a bit. I cleared them all out of a perimeter around my base so that the pollution wouldn't cause them to attack. Later on, I went patrolling the borders and saw a group of aliens sitting there doing nothing. No aggressive moves to me, etc. I noted where they were and came back later to find a new alien base in roughly the same pattern they were standing. Some of them turned into spawners, some turned into worms. If you're not careful on keeping up with monster patrol, you can get overrun... As I explored further out, I found areas that were so thick with spawners that even with my top level combat shotgun and ironman armor, I couldn't take them all out with any degree of certainty. The longer you wait, the more the aliens multiply.

This was back in the 0.10 versions though. I built the Missile defense system in that version and I've been waiting for them to get closer to release before I went back. You're right about it being addictive. That 40 hours that it took to build that base zoomed by.
0 Likes

nifker 5 Mar, 2016
View PC info
I already bought the game two years ago and it is really fun.
0 Likes

SketchStick 5 Mar, 2016
Great game, it's mostly just lacking end-game content and the combat is still a bit shallow. That's probably the main reason for its early access status, the actual factory building side of it is top-notch and makes it well worth the purchase. You'll get through a few really lengthy playthroughs before you notice the lack of end-game.
0 Likes

View PC info
Aliens do make more colonies. I haven't played this game for a long while so I don't remember the specifics, but I do remember that pollution plays a very big role in this game. It makes the aliens evolve much faster and expand (grow their existing nests and build new ones). If you produce huge amounts of pollution without getting enough products in return, you'll end up with a weak, defenceless base, and huge alien colonies all over the entire map. It did happen to me first time I played and I almost gave up my save game, however I managed to drive their hordes back and fortify my base after a long struggle and eventually ended that save game at around 70 played hours :D
Then after a while I started over (just because I lost that save game) and did a much better job at power and space efficiency - I also founded my base in a much better area in a blob of land with a sea on a side and a big lake on another. Strategy is indeed a part of this game too.

I am also pleased that this game is so stable, looks like they really worked hard all this time before putting it on Steam.

Also, for those who won't buy Early Access games... there is also a free demo version available. I don't know if it's available on Steam, but it is on their official website. Try that, and you'll love it. This game is more than worth every euro even in it's current state!
0 Likes

niarbeht 10 Mar, 2016
I have become addicted. All is conveyor belts.
0 Likes
1/2»
While you're here, please consider supporting GamingOnLinux on: