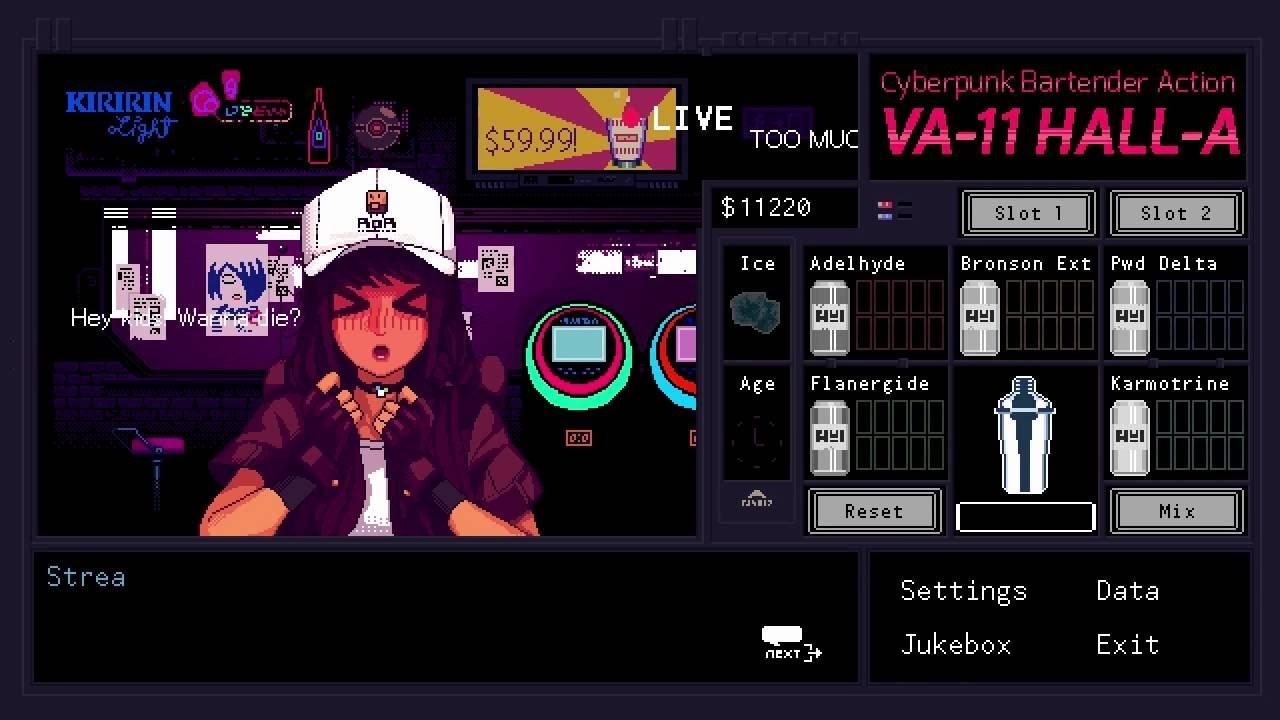 YouTube videos require cookies, you must accept their cookies to view. View cookie preferences.
Accept Cookies & Show   Direct Link
VA-11 Hall-A: Cyberpunk Bartender Action has been released for Linux and thanks to the guys at GOG I have been sent a copy to play with. Here's some thoughts.

If you buy it from GOG, be aware that you will need to install specific libs to get it running, as GOG games do not bundle the libs you need with it.

Note: I'm actually a massive Anime fan, so it's not that I don't like Anime. I own plenty of DVD and Bluray Anime series, a number of Manga novels and so on. Understand that before reading.

I'm going to be honest, I usually steer well away from Anime styled games because of how they usually like to shovel cleavage into your face at all times. I am always hoping one will hook me in, which is why I keep trying them. VA-11 Hall-A: Cyberpunk Bartender Action seems to be an entirely different breed, it seems like a much more mature visual novel.

The interface is actually quite ingenious, you use a smartphone to save and load the game, as well as reading in-game news and changing the music. I actually think that's brilliant and quite funny due to the rise in popularity of smartphones people will feel right at home doing it, I know I did.

The main aim of the game is to mix a bunch of ingredients together and serve them up to random customers that wonder in, and have them tell you it's not good enough. So you make another, bigger and better and then they have a chat with you. This is how you really learn about the world of the game, but getting people drunk.

Some of the writing is actually quite bang-on, especially the news editor. What he says is so true about so many news companies and investors and so on it's quite striking. The writing in general isn't bad at all. When you manage to power past the first customer (who waffles on like mad), it actually gets a little bit more interesting when you learn some things about your boss.

I found the actual gameplay to be rather boring and uninspiring. Mainly because I don't get along with visual novels, but if you usually do, you will probably quite like it. I realise not everyone shares my tastes and I realise visuals novels are a big thing, and this one at least does a few things differently and mixes it up a bit (see what I did there? You're a bartender, you mix drinks...I will see myself out).

It spoon feeds you such small amounts of text each time, that the amount of clicking you have to do just to keep reading becomes a real nuisance. It actually stops me being engaged with the story, as everything is broken up by constantly clicking just to read that tiny bit more before I need to click again.

Cracking chill out music though, it does have a great soundtrack.

The Linux version seems incredibly stable, so if visual novels are your thing it works really nicely!

Grab VA-11 Hall-A: Cyberpunk Bartender Action on GOG and Steam. Article taken from GamingOnLinux.com.
Tags: Action, Anime, GOG, Initial Thoughts, Steam
0 Likes
We do often include affiliate links to earn us some pennies. We are currently affiliated with GOG and Humble Store. See more here.
About the author - Liam Dawe

Thanks for the thoughts, I now know I will most likely not like it :).

QuoteIt spoon feeds you such small amounts of text each time, that the amount of clicking you have to do just to keep reading becomes a real nuisance.

This is the main reason why I found To The Moon unbearable, and most VNs do the same.
0 Likes

Quoting: Guesti'm just a little disappointed they didn't use better quality files for the soundtrack. music is half this game and they used ogg at 160 Kbps

Ogg can be different things but assuming it is Vorbis or Opus, 160 kbps is extremely good quality.
0 Likes

Quoting: GuestBut yeah it's a visual novel, you either have the patience for it or you're better of skipping this one.

The problem is, I freaking LOVE Anime, but the read, click and repeat cycle is just so monotonous.
0 Likes

View PC info
VA-11 Hall-A also apparently takes places in the same general universe as Read Only Memories, which is a bit more like a traditional point & click adventure game. I can recommend that one.

From what it looks like, one character of ROM, Jess Meas, also appears in VA-11 Hall-A.
1 Likes, Who?

View PC info
Saw this quite a while ago on itch, been waiting for its official release. And now I wait for a time when I have money, after all I spent on the GOG sale.
0 Likes

View PC info
Did it feel similar to Papers, Please for you? At least externally it appears so (I didn't buy this game yet. I too already bought a bunch of stuff on GOG sale).

Quoting: Guesti'm just a little disappointed they didn't use better quality files for the soundtrack. music is half this game and they used ogg at 160 Kbps (around 95% of the game size is the soundtrack). I liked the soundtrack so much i had purchased it in bandcamp months before the game released. I wonder if i can replace the ingame files for ones with higher quality...
But yeah it's a visual novel, you either have the patience for it or you're better of skipping this one.

Michael Kelly indeed made a great soundtrack for the game. Here the official post on youtube for those who want to listen.

Quoting: iniudanMichael Kelly indeed made a great soundtrack for the game. Here the official post on youtube for those who want to listen.

Thanks, I like the music… Another adventure/VN game with excellent music is The Maker’s Eden.

Quoting: ShmerlDid it feel similar to Papers, Please for you? At least externally it appears so (I didn't buy this game yet. I too already bought a bunch of stuff on GOG sale).

It did feel a bit like Papers, Please to me but without all the communist overtones :P

Fun fact: if you don't buy the item the main character is thinking about, you will not be able to recall drink recipes :D

Also, the story changes depending on the drinks you serve to people but how, I have no clue...
0 Likes

View PC info
This game looks so good, I added it to my wishlist as soon as I saw it.

I actually am a VN fan, and I like how a number of the good ones are being released on Linux. Now I just need a good sandbox RPG.
0 Likes
1/2»
While you're here, please consider supporting GamingOnLinux on: