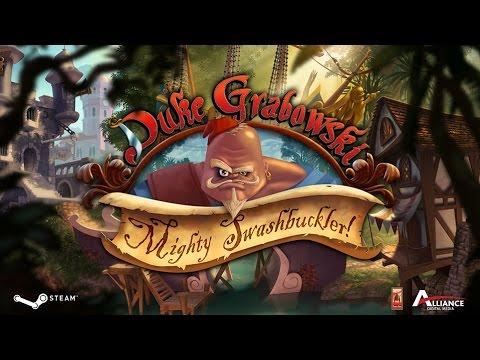 The game doesn't show up in the newly released list for SteamOS/Linux games on Steam, as it gained a Linux version after the original release. I really do hope Valve fix that one day.

It doesn't have many reviews yet, so the Steam review score isn't very accurate.

About the game
Duke Grabowski, Mighty Swashbuckler is a classic point-and-click adventure, created with love by an indie team that includes LucasArts alumni, Bill Tiller (The Curse of Monkey Island, Steven Spielberg's The Dig, Indiana Jones and the Infernal Machine). Play as Duke, a pirate who’s had success in pillaging, ransacking, and other forms of piratey goodness, but doesn’t know a thing about women. Help him prove to his crew he has what it takes to become a captain by winning the affection of the opposite sex – a task that is the most difficult challenge this seasoned pirate has faced! Along his journey to “sea-deuce” he’ll have to tame jaguars, fight zombie sailors, and even wrestle a gorilla! Article taken from GamingOnLinux.com.
Tags: Adventure, Casual, Point & Click, Steam | Apps: Duke Grabowski, Mighty Swashbuckler
0 Likes
Share

We do often include affiliate links to earn us some pennies. We are currently affiliated with GOG and Humble Store. See more here.
About the author - Liam Dawe
I am the owner of GamingOnLinux. After discovering Linux back in the days of Mandrake in 2003, I constantly came back to check on the progress of Linux until Ubuntu appeared on the scene and it helped me to really love it. You can reach me easily by emailing GamingOnLinux directly.
See more from me
Some you may have missed, popular articles from the last month:
The comments on this article are closed.
7 comments
EndeavourAccuracy 20 Oct, 2016

View PC info
Note that this is episode 1, several (four?) more are still in the pipeline.
0 Likes

View PC info
I backed this one through Kickstarter. It's not a bad game, it's just a shame it didn't have a bigger budget to play with. The music and background art are quite well done. Has a bit of a Monkey Island style feel.

The animations are a bit of a let down though, and I'm not sure if the voice of Duke (also Duke Nukem) is quite the right fit. That could just be how I imagine him sounding in my head though.

The controls are also a little clunky, though pretty easy to pick up. The puzzles themselves don't seem too taxing (so far!)
1 Likes, Who?

View PC info
This game reminds me of "Jack Keane". An older pirate adventure with similar visuals.
1 Likes, Who?

Also, Telltale games back when they were traditional point-and-click adventures. Could be good, we'll see.
1 Likes, Who?

View PC info
The point and click genre is very hit and miss with me but this looks like one I would enjoy.
0 Likes

Farmboy0 20 Oct, 2016
View PC info
Does this use tank controls or even this hideous control scheme that tales of monkey island used?
0 Likes

Quoting: Farmboy0Does this use tank controls or even this hideous control scheme that tales of monkey island used?

Nope, it uses traditional point and click controls (I'm not even sure if it has gamepad support, but who needs that when you have a mouse \o/).


I also backed this one on Kickstarter. I was hoping for a little more, but given their budget totally understand why the game has the scope it has. It's rough around the edges in some places, but could be a start to a great series. I enjoyed the first installment and am looking forward to seeing where things go from here.
0 Likes
While you're here, please consider supporting GamingOnLinux on: