If you're in the mood for a decent Zombie survival game, don't pass up on Project Zomboid 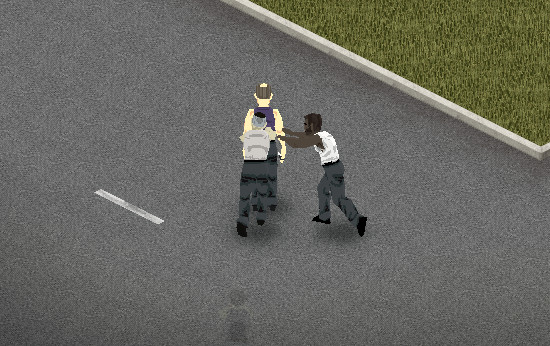 Project Zomboid [Steam, GOG, Official Site] is the rather good sandbox Zombie survival game from The Indie Stone, and it has come a long way!

It doesn't have a SteamOS icon on Steam, as Valve removed it a long time ago as it (and a bunch of other games) wouldn't launch correctly on SteamOS. It works perfectly fine on a normal Linux distribution and I assure you the Linux version is still on Steam and perfectly up to date.

I know what you're thinking, and no this isn't just "another Zombie game". This game has been in development for years, it's been through hell and it's come out a better game. The developers have been putting in a crazy amount of effort into this title.

Note: I highly recommend using the "IWBUMS" beta branch on Steam, which is what I use. It's their beta branch where all the new fun stuff goes in. The current stable version is quite outdated in comparison. More info on that here.

The newest beta version added in:
- Nights events, keep those curtains closed
- Zombies can tear down sheets
- Wet items will dry out after a while
- You can now paint walls (spruce up that safe house!)
- You can now paint wooden furniture
- New food items and recipes
- You can make a Molotov, and watch those Zombies fry!
- Tons of helpful additions for online play admins to make servers nicer
- Sleeping changes: A nice bed will be better than a chair for example
- You can now drop your cooking pot, bowl, bucket or saucepan to collect water
- And tons more see here

What's terrifying is that you can only see in front of you, even though the game is from a top-down view. Zombies can, and will, sneak up on you for a tasty snack.

I played through the newer tutorial, ate a mouse and got queasy, equipped a saucepan and bashed a Zombie's head in. Well, that's one way to introduce someone to a game.

It has everything you could want in a Zombie game: hordes of Zombies, crafting, injuries, skills, looting, online servers and more.

The game also features a bunch of scenarios and challenge maps to complete, as well as the original sandbox mode (which is now highly customizable), which is awesome to see.

I'm really impressed with how the game feels now, it's exiting, engrossing and it looks a lot better visually than it did a while ago.

Be sure to check it out and tell me what you think. Article taken from GamingOnLinux.com.
Tags: Early Access, GOG, Initial Thoughts, RPG, Sandbox, Simulation, Steam, Survival | Apps: Project Zomboid
0 Likes
Share

View PC info
It's a truly amazing game! Ten out of ten, would recommend again!
0 Likes

View PC info
Oh damn, 3d models on the screenshot. The game surely went a long way since I first played it in 2012.
1 Likes, Who?

Valve should display the Tux logo for games which do not support Steam OS properly but work on desktop Linux. Preferably they should be displaying both when games work fine on both, since Steam OS and regular desktop Linux offer VERY different experiences

View PC info
Horrible recommendations on Steam. I wonder if it's under active development. How much is the difference between the stable version and IWBUMS beta branch?
0 Likes

Quoting: PsyringeHorrible recommendations on Steam. I wonder if it's under active development. How much is the difference between the stable version and IWBUMS beta branch?

The overall rating forProject Zomboid, based on 12,423 reviews, is Very Positive. Glancing over the most recent negative reviews (of which there are only 201) the "Horrible Reviews" I see are doing a lot more whinging about of PZ's slow pace of development than about its quality of gameplay. I'm not a math guy, but 201 of 12,624 total reviews is 1.6%, so pretty small number of negative reviews, really.

PZ game went into my wishlist a little over a year ago, and, because I follow it, I can tell you that it is updated regularly and at length. I haven't bought PZ at its $14.99 price tag because, quite frankly, its still in Early Access game and still in flux and I like my games to be closer to their final form than PZ seems to be. I'm just waiting on a good sale price to risk such a purchase.


Last edited by Nanobang on 26 October 2016 at 1:30 pm UTC
1 Likes, Who?
While you're here, please consider supporting GamingOnLinux on: