The Transport Fever developers outline their post-release plans, performance will be worked on 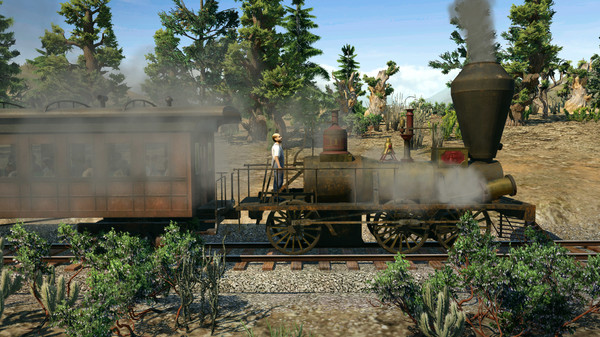 Transport Fever [Official Site, Steam, GOG] is an interesting simulation game, but sadly it does have a lot of issues. Performance being the most major one, with it all over the place.

The developers have outline their post-release plans in a news post, and it sounds like they are taking all feedback on.

QuoteBased on this, let us present our post release plans. First, we will release another patch to fix the few remaining crashes and clarify the game-play mechanics. For instance, there are some inconsistencies with the catchment area of stations, and running lines with vehicles waiting for full load is sometimes destroying the line frequency, which then leads to industries stopping production. Also, it seems to be unclear that industries with full output stocks stop their production, so a player has to be informed when only a part of an industry chain is connected.

Once the game is running stable for everyone, we will focus on improving the performance. We understand that performance is suboptimal in certain cases, heavily depending on graphics hardware, but generally in the late game. Therefore, we plan to release a major performance update to address these issues.

I am looking forward to the patches, as I don't really want to go back to the game until it's sorted.

It's not that it's a bad game, far from it, it just has a bunch of issues that really should have been sorted before the release. Inconsistent UI, performance problems (sometimes major too) and so on. Article taken from GamingOnLinux.com.
Tags: GOG, Simulation, Steam | Apps: Transport Fever
0 Likes
Share

gojul 16 Nov, 2016
View PC info
From campaign 2 things get locked while you don't know what happens... Well, due to this you don't know how to continue. Looks this game is like Simutrans, but unsure...
0 Likes

View PC info
It's interesting that they mention graphics hardware for the performance issues when my personal experience is that the biggest issues cpu related. One example was me moving around completely zoomed in when my fps dropped from 45 to around 22. The second I stopped moving, it jumped back to 45. Since nothing on screen changed significantly when zoomed in so far, it must have been doing something else to cause the slow down. For me it's no big issue, but I can imagine that something like that could make it unplayable on weaker machines.
0 Likes

View PC info
I guess it's CPU related but they don't want to tell you - just because they can't fix it! It's essentially a single threaded game which would mean to re-do the whole engine to get rid of that. The only thing you could try to do is making the overhead as small as possible.
0 Likes

reaVer 17 Nov, 2016
View PC info
The hangs I'm getting feel as if they are IO related: when textures are loaded, data is being saved, those kinds of scenarios.

The tutorial forgets to mention that the depot needs to be connected to the line to spawn a train and doesn't mention signals. There's also too much traffic in the tutorial, causing your bus to be permanently stuck in traffic jam.

There was also no mention on what product a plant produces/offers on the station if there is only one platform while more products are available(I haven't tested multiple platforms yet) and if you put 2 signals in the same place(one each direction), trains are inclined to move to the signals and enter a deadlock.

What I'm missing thus far is the lack of train AI. Just look at any rail yard and you will see a lot of stuff going on, in the game none of this comes back. Trains can magically turn, you can't combine engines and you lack the flexibility that trains offer irl. There is also no mention of what distance a train can travel to be cost effective, maintenance takes a lot out of a train regardless of what it is doing.

On the practical side, the game seems fairly intelligent. I think the economy system is fairly well done and I don't think it will require much more attention. Road building and rail building is pretty easy and you have good control over the climbinggrades.

View PC info
I love this game and luckily enough i have a powerful enough laptop to slog trough it. With my Nvidia 1070 GPU and a Intel i7-6820HK CPU the game seems to be doing just good enough, even late game with maxed graphics. Not great, but tolerable. I had to set autosave to every 5 years instead of 1 year, since that is the only thing that seems to make the game stutter from time to time.

Also using Manjaro's(Arch-based) native libraries instead of the outdated Steam libs seems to improve the performance. I tried both. Another case where Steams outdated libs are causing problems. I would recommend people to try Steam with the distro's native libraries for every game, unless you are actually using Ubuntu 12.04.


Last edited by Sn3ipen on 20 November 2016 at 12:57 am UTC
0 Likes
While you're here, please consider supporting GamingOnLinux on: