Some thoughts on switching from Ubuntu to Antergos for Linux gaming

Why I switched
There’s many reasons for my switch, but the main one has been stability. Ubuntu has been getting more problem-filled with every new release for me so I had enough. Not only that, but due to it being dependent on GNOME packages, stuff was being stripped away too and it’s just a mess now. Some applications have normal title-bars, some have GNOME’s new styling with everything sodding hidden and it’s just all mashed together.

Audacity would constantly screw up and just skip over audio while trying to record or playback, or just flat out not work.

Multiple games wouldn’t give me audio until I killed PulseAudio and reloaded it or did other trickery. It was becoming a nuisance, especially when I want to livestream and “oh sorry guys, let me fix my audio, fuc…”.

It seems Ubuntu has a lot of problems with their setup of PulseAudio. I don’t know what they’re doing to it, but they’re murdering the poor thing.

Antergos, I choose you!
If Antergos is anything, it’s like walking in heavy rain without a coat and — suddenly the clouds part and the almighty sun is shining down on you to make everything better. Something like this essentially (thanks Samsai): 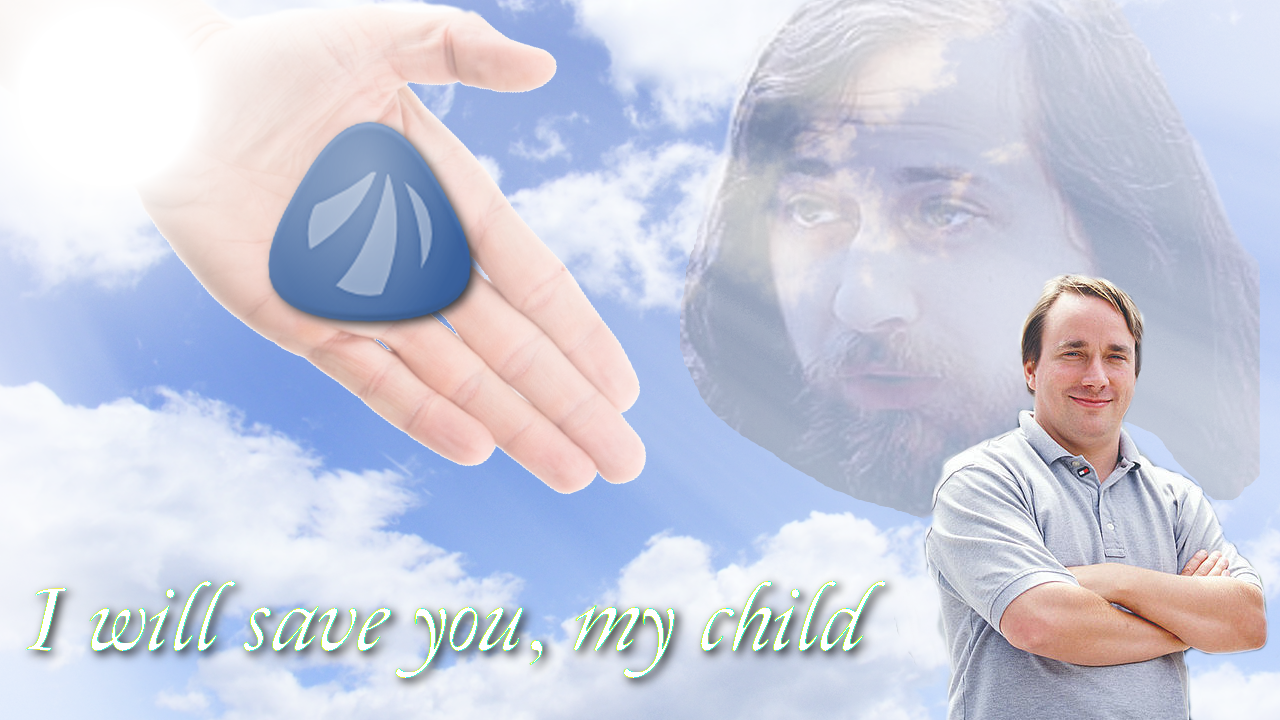 I’m probably not overselling it — okay maybe a little.

I adore the Arch User Repository (AUR) and have found it so incredibly useful for multiple applications I use on a daily basis, especially when those same applications on Ubuntu could be out of date for weeks and months. The brand new Minecraft launcher was in it the day it was release by the official developers, the itch.io app is in it, everything I need is right there and tested by tons of people. It’s essentially a far better PPA-like system. It’s easier to understand too, thanks to a much clearer layout on the actual website.

Just don't outright trust everything on the AUR, make sure you read a few comments before installing a random package. I'm sure you're all smart enough to know to do that anyway.

Getting used to KDE after being on GNOME or GNOME-like desktops for many years has been a challenge by itself, but wow, it’s actually a lot nicer. Things aren’t hidden away where I don’t expect them to be, if I want something it’s usually right where I would expect it in a proper menu.

There was two “gotchas” I had to sort out. I couldn’t figure out why OBS Studio wouldn’t pick up any video, so eventually I tested gaming and games ran at 5 FPS. Turns out that installing the nvidia drivers didn’t come with the 32bit libs as a dependency. So, if you do decide to check out Antergos with Nvidia, make sure “lib32-nvidia-libgl” is installed too. This took me a good day to figure out too, as I didn’t think to test games until the next day and that made me realize it was a driver issue.

The second was that one day I booted up to a black screen with a cursor, as the system booted so fast that LightDM didn't load (Arch Wiki entry). I had to edit "/etc/lightdm/lightdm.conf" to include:
[LightDM]
logind-check-graphical=true

I also learnt about bash aliases thanks to being on Arch, so instead of running something I can never remember like “Yuarty -sYusudaadasdas” to update, I have it setup so I just run “upall” in terminal and it updates everything for me — glorious! It’s easy to do as well, simply edit:
~/.bashrc
Add at the bottom:
alias upall='yaourt -Syua'
You can substitute “yaourt -Syua” for anything, like “apt-get update && apt-get upgrade” for Debian/Ubuntu and so on.
And then save it.

Lastly, enjoy a shot of my KDE Antergos dual-desktop:


Seriously, you should give Antergos a try. It’s Arch, but a more tame Arch since it has a live-media option and you can pick what desktop you want from the installer. This was a key selling point for me, and the installer was a breeze too. Article taken from GamingOnLinux.com.
Tags: Editorial
24 Likes
Share

I am the owner of GamingOnLinux. After discovering Linux back in the days of Mandrake in 2003, I constantly came back to check on the progress of Linux until Ubuntu appeared on the scene and it helped me to really love it. You can reach me easily by emailing GamingOnLinux directly.
See more from me
Some you may have missed, popular articles from the last month:
The comments on this article are closed.
147 comments
Page: 1/15»

z3ntu 18 Jan, 2017
View PC info
You should use pacaur or anything else than yaourt ;) https://wiki.archlinux.org/index.php/AUR_helpers#Comparison_table
10 Likes, Who?

View PC info
Congratulations for choosing a Galician Distro (Antergos meaning "Ancients" in Galician)
6 Likes, Who?
Aro 18 Jan, 2017
The AUR is like the killer "feature" the arch universe has.
There are 2 places to look for packages. In the official repos. 'pacman -S <package-name>' or the AUR.

I hated having to 'install' serveral ppa's in ubuntu oder other distros to get different software.
This process always made the whole system more unstable.
4 Likes, Who?

View PC info
I made the same swith from Ubuntu MATE a few months back. Applets kept crashing on me when I switched to 16.10, even on a clean install. I decided to give a rolling release a try and remembered Chris @ LAS talking about Antergos. I booted it up, liked their Gnome DE - which is saying something since I normally don't like Gnome - installed it, then put Cinnamon on it. I've been in love ever since.
1 Likes, Who?

gojul 18 Jan, 2017
View PC info
Frankly as a KDE user I switched one year and a half ago from Kubuntu to Debian + backports and it is both damn stable and faster than Ubuntu. I do not regret my choice at any moment. Ubuntu rocked in its early days but now it has become a complete mess, and with Mir things will probably get even worse...
2 Likes, Who?
TheRiddick 18 Jan, 2017

View PC info
I'm pretty happy with my Manjaro KDE desktop. Thought I have not been using it much lately(SSE/FO4 etc.), it still works without issues.
2 Likes, Who?

View PC info
There's just one thing... Be very wary of AUR packages, make sure to read all comments on them. It is absolutely entirely possible for a malicious package to be made and pushed through - not saying it's likely, just that it is possible.

My top distros have been: Antergos, Manjaro, OpenSUSE Tumbleweed, Fedora. Currently sticking with OpenSUSE now, because the RPM tools and the RPM format itself are absolutely rock solid with everything split properly in to devel, debug, and lang instead of all lumped together as in pacman based distro.

How is KDE so far for you? I almost always experience crashes in it. And the absurd amount of configuration available meant I was getting sidetracked trying to find the prefect config instead of working (same reason I ditched tilers). Which is why I use Gnome and apps built for it - they get out of my way and give only what is needed.

Having said all that, I almost always suggest Manjaro for new users these days. It's solid, rolling (but lags a little), works very well for gaming and graphics drivers, and has most software desired. I would recommend OpenSUSE, but Tumbleweed can sometimes have issues with updates (and it is the fastest rolling release I've seen at times), and the Leap variant, whilst stable and based on Enterprise SuSE, is just a wee bit outdated by the time a release is made - openSUSEs trump card is the YaST suite of tools, you really can't top it.
6 Likes, Who?

This table is very much outdated. Yaourt doesn't source anything before you check the PKGBUILD and it does that for every single AUR package. Also it doesn't ask for root password before it's really needed.
2 Likes, Who?
Spud13y 18 Jan, 2017

View PC info
I made the switch to Antergos with KDE as well, since Debian Testing didn't have Chromium up to date and Manjaro refused to install kernels that I wanted (could've been my fault, but too late now). I use it on a laptop so I don't have any "actual" hardware to test it on, but I'm really happy with it. I hated their LightDM so I followed their instructions I found online and switched it out for SDDM.
0 Likes
1/15»
While you're here, please consider supporting GamingOnLinux on: