By Liam Dawe - 11 March 2017 at 7:45 pm UTC | Views: 6,610
Impressive work by Yaakuro, who has been able to get SteamVR to work with Unreal Engine 4 and it uses OpenGL. Yaakuro sent this to me on Twitter to check out earlier and impressive it is! 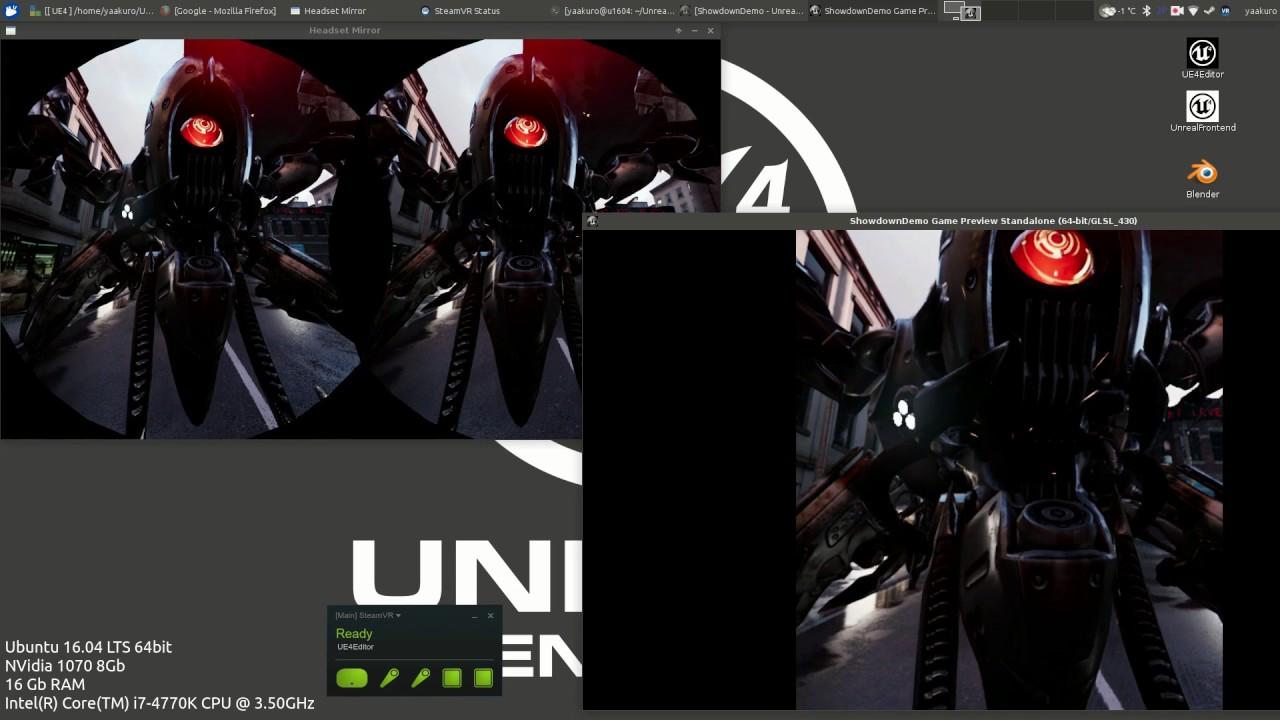 
QuoteThis is the next progress. The OpenGL implementation works, not super fast but it works. Thx a lot to Valve (Plagman) with supporting me with a real HTC Vive so I could work on the porting with the real thing :D. Soon I will put my changes onto Github.

It will be interesting to see what happens with this, since SteamVR on Steam for Linux uses Vulkan. Article taken from GamingOnLinux.com.
Tags: OpenGL, Unreal Engine, Virtual Reality
13 Likes
Share

haagch 11 Mar, 2017
It's not that OpenGL is not allowed, it's just not likely to work fast enough for VR yet.


QuoteOpenGL applications are currently too slow to use interactively; only the Vulkan Submit path is optimal. See: https://github.com/ValveSoftware/openvr/wiki/Vulkan

Dave Airlie mentioned that for example radeonsi is missing extensions that would would make it fast.
0 Likes

View PC info
As one of the many thousands (or millions) that isn't planning to jump on the VR bandwagon unless the price drops drastically, I'd like to see Unreal Engine working in Linux properly before they start fiddling with fancy fluff like VR.
1 Likes, Who?

Quoting: haagchIt's not that OpenGL is not allowed, it's just not likely to work fast enough for VR yet.


QuoteOpenGL applications are currently too slow to use interactively; only the Vulkan Submit path is optimal. See: https://github.com/ValveSoftware/openvr/wiki/Vulkan

Dave Airlie mentioned that for example radeonsi is missing extensions that would would make it fast.

I suppose that's a valid point, but I mean if we talk about using Nvidias proprietary drivers, wouldn't that be fast enough?
0 Likes

VR bandwagon? It's Stephensons Rocket. I know, because I'm on it ;)
0 Likes

VR bandwagon? It's Stephensons Rocket. I know, because I'm on it ;)

ALSO, I personally would have to upgrade my processor, video card, Ram, Hard Drive, heck I'd need an almost entire new system just so I could spend another £700+ to strap the headset on & be able to actually use it.

I don't understand why they waste time and resources with this..

Virtual reality will be a success only if we manage to hack the human brain with a non-invasive method, stimulating the parts related to the five senses... And that is science fiction, for now.
0 Likes
While you're here, please consider supporting GamingOnLinux on: