By BTRE - 7 April 2017 at 5:51 pm UTC | Views: 6,943
This colorful game with tactical battles looks interesting. The developers have asked for feedback in the build up to the launch of their crowdfunding campaign. 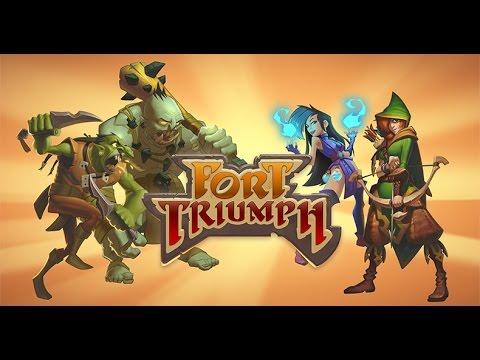 YouTube videos require cookies, you must accept their cookies to view. View cookie preferences.
Accept Cookies & Show   Direct Link
Fort Triumph [Official Site] marries the tried and true mechanics of controlling a small group of specialized heroes against tough odds with a fantasy setting. Expect to battle goblins, the undead and other nasty creatures while unlocking new abilities and powers for your characters. I played through the three levels available in the public build and had a nice enough time. Interacting with the environment, crushing enemies with pillars or knocking them back with crates was something different than the usual tactical RPG fare. I also appreciated the fact that the objectives for the missions were varied and sometimes changed.

If you’re interested in giving the game a test you can either get the latest build through Game Jolt or Google Drive. Please send your feedback to Shay@Forttriumph.com . You can also reach the dev through Twitter.

The public build worked just fine for me on my AMD card with Mesa but I’m sure that having reports on all sorts of hardware and configurations will be useful to the developer. This is a pre-alpha build so expect rough edges and placeholder assets. At the launch of their Kickstarter later this month, there should be a newer and more polished demo to try out. Article taken from GamingOnLinux.com.
Tags: Demo, RPG, Strategy | Apps: Fort Triumph
6 Likes
Share

View PC info
Again, this generic cartoonish design... Whatever it's nice they are testing it on Linux with the help of real players.
0 Likes

View PC info
Looks good turn based maybe? Just one thing I don't like the idea of kicking things to enemies that lacks style.
0 Likes

Eike 5 May, 2017
View PC info
The game now has a demo on Steam. I played it yesterday (and wondered if I should write an article, just to find out there already is one :) ). It's really leaned to Xcom, which I consider a good thing. The graphics remind me of Torchlight. I do like the environmental interactions, it adds nicely.
0 Likes
While you're here, please consider supporting GamingOnLinux on: