Some thoughts on Ziggurat

Classic first-person shooters are without question my favourite video game genre. Having grown up on games like Doom and Duke Nukem 3D and then later falling in love with Blood, I often still find myself drawn to my collection of classic FPS titles, either to replay old favourites or to try for the first time one of the few stragglers that have somehow managed to escape my notice. It is a deep well of FPS games I have, but it is by no means limitless, and it is here that I encounter a problem.

Despite being similar to the Shareware scene that spawned so many classic FPS titles, the modern Indie market has so far failed to provide me with many games that scratch the same itch. Instead I have been forced to expand my horizons to genres that I had no prior affinity with, and while there is value in that, it would be nice to be able to sit down and play more Indie games that can satisfy both my classic FPS craving while at the same time pushing the genre forward.

Ziggurat attempts to do both, and it wins my respect for that. Developed by Spanish based Milkstone Studios the game welds classic FPS action inspired by games such as Heretic and Hexen onto the frame of a modern rogue-lite, challenging players to survive five floors of procedurally generated content. As with most rogue-lites death is permanent, but even a failed attempt can unlock more possible perks, weapons, or characters to go into battle with the next time.

Combat itself takes on the form of a swarm shooter, with you being locked into closed rooms and forced to contend with waves of spawned monsters. It is a trend in modern FPS design I do not actually appreciate, especially since it has grown to largely encompass most people's understanding of what a retro styled FPS is, disregarding the importance that smart enemy and item placements had in those games. In Ziggurat though it does at least gel with the rest of the game's randomized nature. 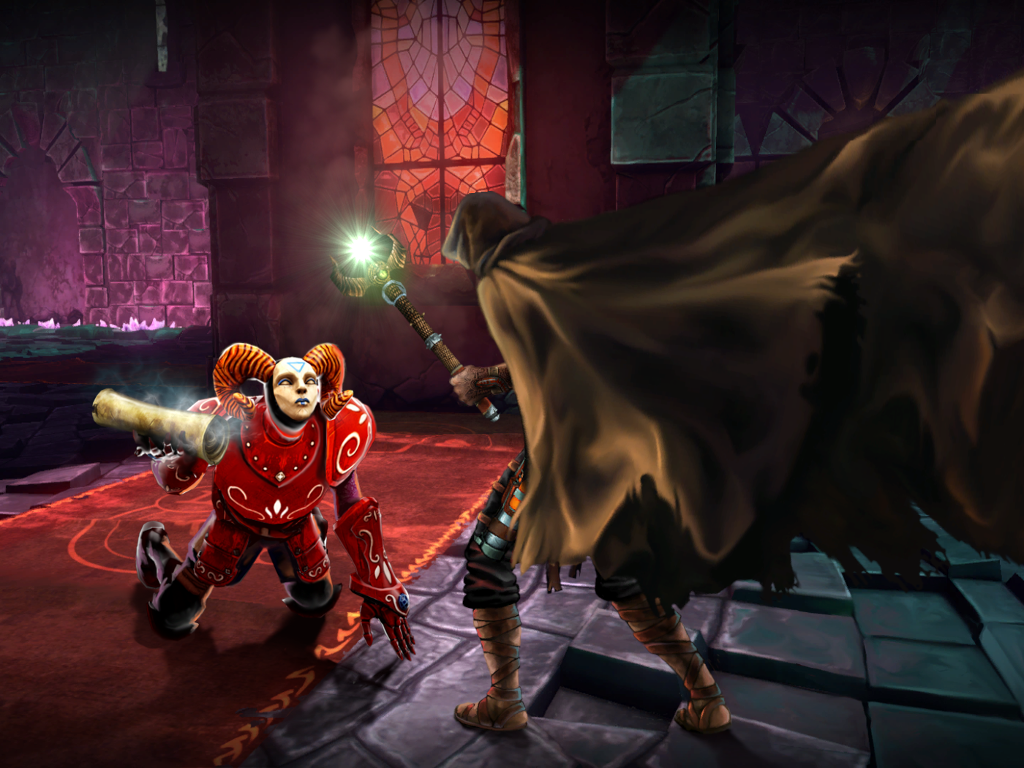 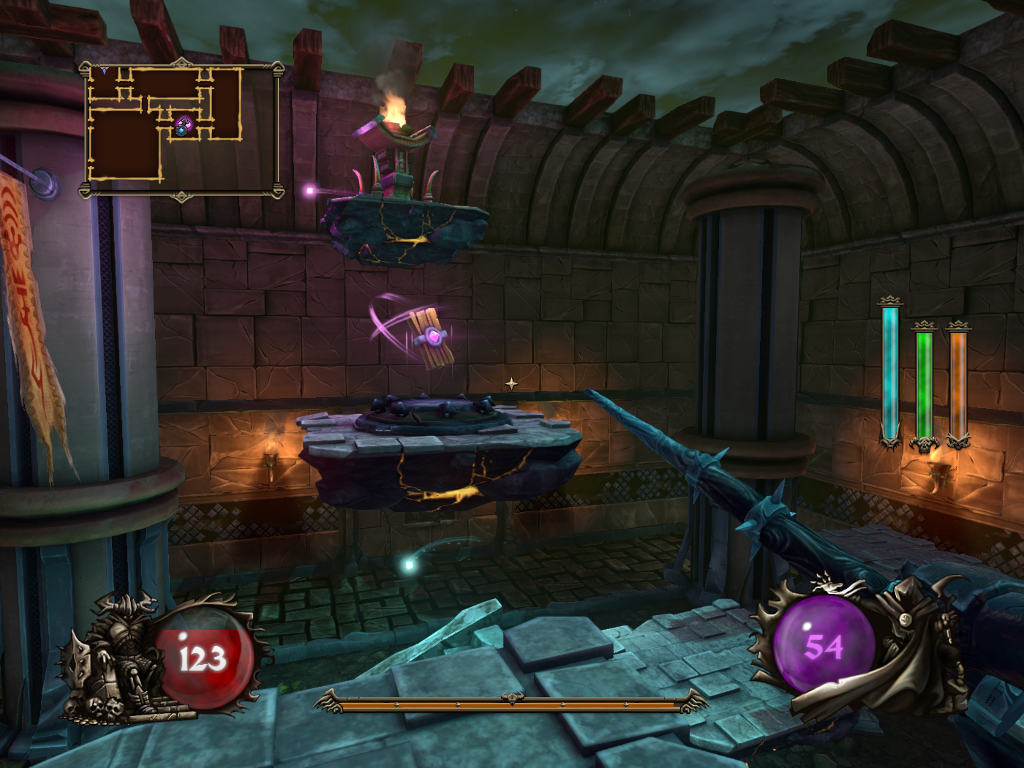 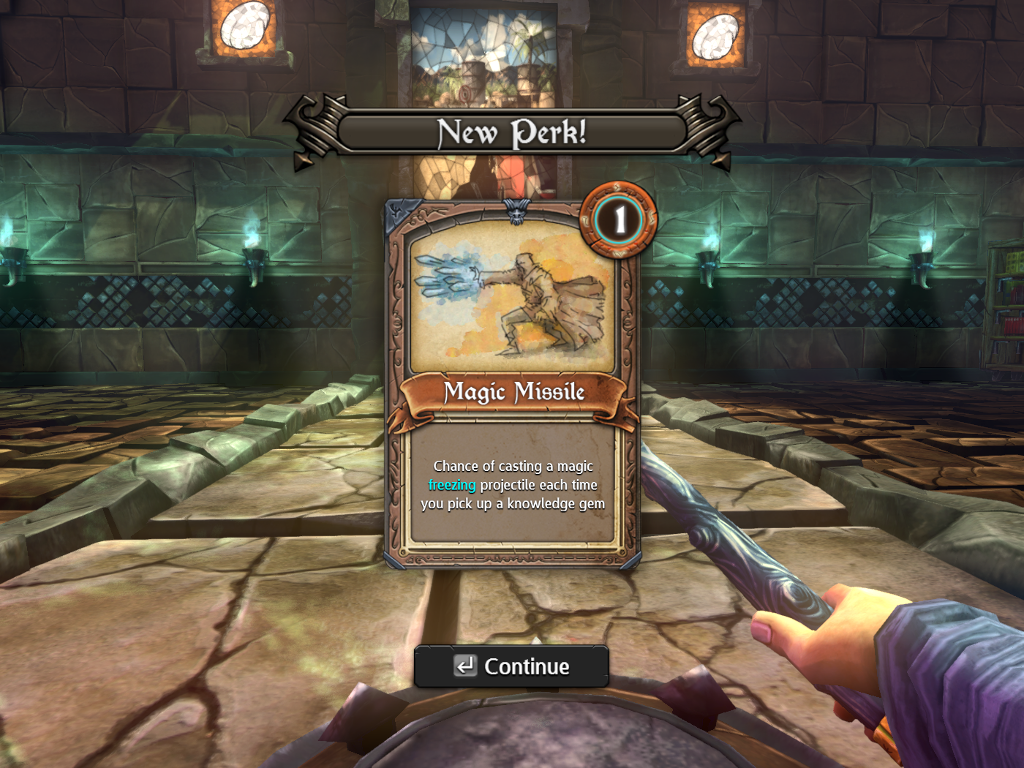 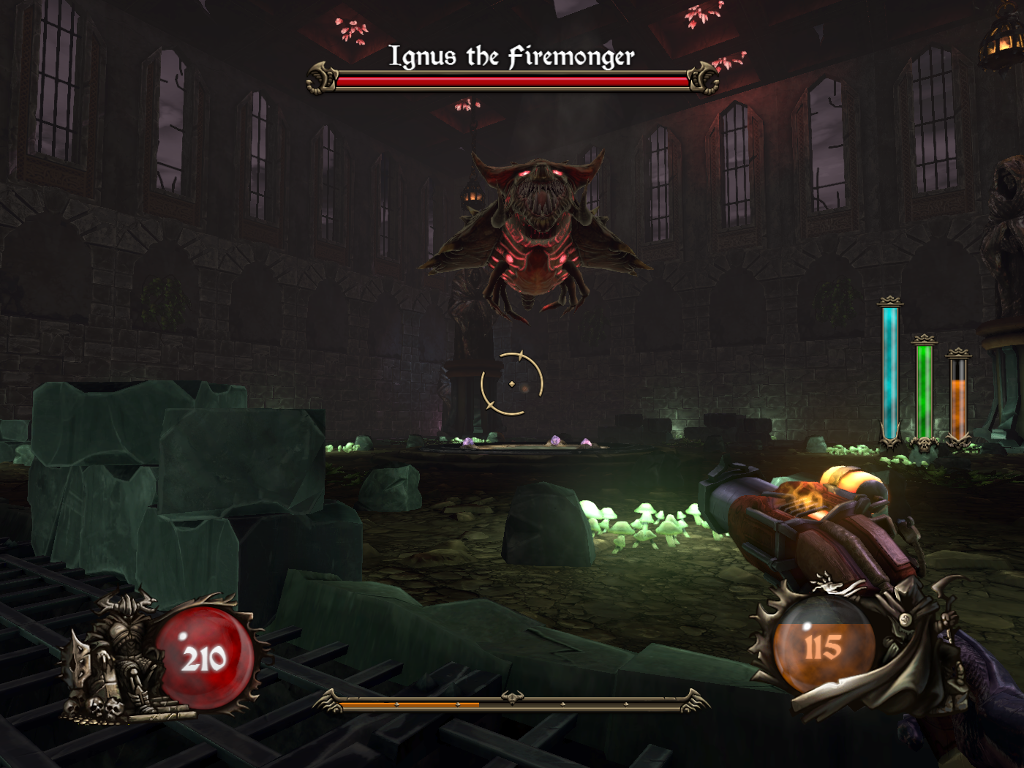 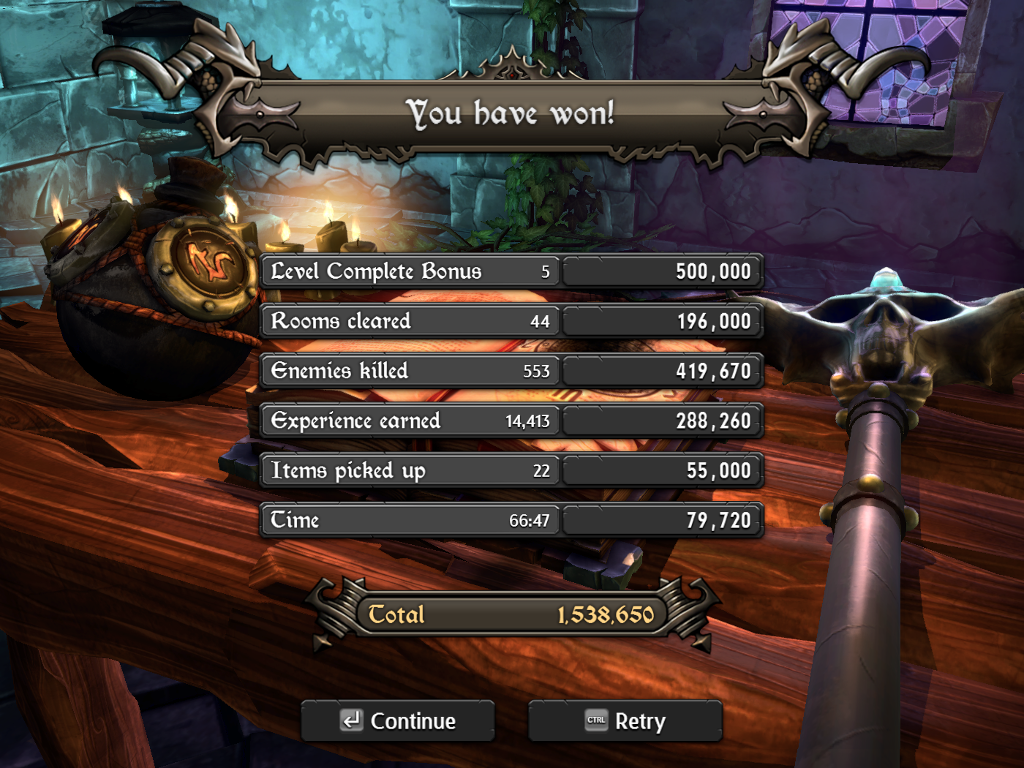 To help keep things interesting Ziggurat features a wealth of weapon and enemy permutations, as well as a variety of different room types and combat modifiers. These either introduce puzzle elements or force the player to fight from a different angle. Perks are also introduced each time your experience levels up or when you find a secret room, giving you access to a selection of variable upgrades, while shrines and mystery boxes can be used to shake things up even further.

In the end though all this shows is that Ziggurat is in constant need of running away from itself. The demands of the game's procedural generation have forced its designers to keep the base game simple, something that becomes all the more apparent the more time you spend with it. Things quickly become routine in spite of the randomized differences, causing the game to ultimately lack the crafted feel that made so many classic FPS games endearing.

What saves Ziggurat then is its charm. Its dark fantasy setting sets it apart just as it did its forebears, although like with Heretic and Hexen the game's magical weapons still feel more like reskined guns than they do real eldritch tools. Enemies include such oddities as man eating carrots, and a great deal of the combat modifiers are nice and inventive, such as the one that forces you to hop around like a frog. These touches do more to enrich the game than any amount of internal math ever could.

People forget that the original Doom was an Indie game. Many classic FPS titles were made by small teams crafting their own unique visions, creating experiences that were far more personal and novel than any big budget production can be. Indie game development has revitalized many genres long thought to be dead or dormant, and Ziggurat proves that classic FPS games need not be an exception. Ziggurat may not be perfect, but it is precisely the kind of thing I want to see more.

Article taken from GamingOnLinux.com.
Tags: Action, DRM-Free, FPS, Review, RPG, Unity | Apps: Ziggurat
14 Likes, Who?
We do often include affiliate links to earn us some pennies. We are currently affiliated with GOG and Humble Store. See more here.
About the author - Hamish

Hamish Paul Wilson is a free software developer, game critic, amateur writer, and farm labourer living in Alberta, Canada. He is an advocate of both DRM free Linux gaming and the free software movement alongside his other causes, and more information on him can be found at his icculus.org homepage where he lists everything he is currently involved in: http://icculus.org/~hamish
See more from me
Some you may have missed, popular articles from the last month:
The comments on this article are closed.
8 comments

View PC info
The only thing that keeps me away from Ziggurat is his roguelike nature: I really loved Doom for his level design. The levels are fantastic, and even after years I can still remember nearly all of them and enjoy the game.
With roguelikes with random levels all that magic is lost. It's not about replayability: I replayed all of the Doom (Heretic, Hexen, Quake, etc...) games over the years and not feel bored at all, because the frantic gameplay plus the level design made the magic.
Ziggurat (and nearly all of the roguelike-type games) slip usually into the forgettable gameplay and you'll never try the "now this will happen, let me be prepared" sensation that the classic FPS can give you.
3 Likes, Who?

View PC info
Yes, I wouldn't call this game "closed room", this is more likely due to its Rogue like nature.

This game looks quite good, but I've never gone around to actually buy it.
I really like Tower of Guns as a Rogue like FPS, and wish there was some multiplayer.
2 Likes, Who?

Quoting: M@yeulCYes, I wouldn't call this game "closed room", this is more likely due to its Rogue like nature.

The point I was making is that the combat is more Painkiller than it is Quake, wherein you enter a combat stage, the door slams shut behind you, and you must contend with whatever is thrown at you using only the tools you have at your disposal at the time, other than what is given to you from item drops.

Quoting: ziabiceThe only thing that keeps me away from Ziggurat is his roguelike nature: I really loved Doom for his level design. The levels are fantastic, and even after years I can still remember nearly all of them and enjoy the game.

Agreed, and more crafted levels are one of the things I did miss when I played Ziggurat, but as I said in the article the game's personality was still enough for me to be able to carry on without it. I do still long for a solid FPS campaign in an Indie title though.
0 Likes

View PC info
The one thing I would love to see from this type of game; is a first release that uses the proc-gen for level gen, and then an add-on/2nd release that includes handcrafted levels.

That, would make my day.
0 Likes

ShabbyX 10 Apr, 2017
View PC info
I played Ziggurat a lot, despite myself. With the new characters that get unlocked every time or other you finish the game, a new level of challenge is added to the game which keeps the game interesting for a lot longer than I would have expected. Also, the random level-up "cards" can change each playthrough a lot, sometimes making it much harder by denying you some upgrade you usually depend on.
1 Likes, Who?
rustybroomhandle 11 Apr, 2017

To me Ziggurat has a lot in common with Binding of Isaac, except first person. I'm not a big fan of BoI, but I do like Ziggurat. Used to play the daily challenge every day.
0 Likes

View PC info
I'm a big fan of Ziggurat. One of the earlier FPS games I got stuck into when I converted my gaming to Linux. Like Hamish, I started off with earlier classics - Wolf3D, Doom, Duke3D, Quake, Blood, Heretic, Hexen - played on DOS or Windows.

Before I played Ziggurat, I had been playing loads of Nexuiz and Xonotic multi-player deathmatch on Linux (especially Nexuiz) - literally for years, until most of the community moved on.

I'm reasonably in agreement with what everyone has said about Ziggurat. My thoughts on it:

The selection of weapons and choosing which ones to keep - makes the game more interesting.
Unlocking additional characters, abilities, and weapons over repeated plays - keeps you coming back.
Adjusting play style, based on character choice and weapons and items picked up - keeps it fresh.
Although the random procedurally-generated levels do get same-y after many playthroughs - not so bad.
At least the type of levels changes as you progress - you only get to see them if you progress well.
Achievements, unlocking items and characters - e.g. killing X number of particular monster, finishing the game.

Took me quite a long time to finish the game (the first time) and then more time to unlock each character. It is a hard FPS. Maybe not as hard as Serious Sam on Serious setting, but when you die - BOOM - Back to the start. With Serious Sam 3: BFE (and the earlier SS games, which can be played with Fusion) you can SAVE whenever you like.

Quoting: ziabiceZiggurat (and nearly all of the roguelike-type games) slip usually into the forgettable gameplay and you'll never try the "now this will happen, let me be prepared" sensation that the classic FPS can give you.

That is exactly what I expect from a roguelike game. I DON'T want to know what happens now. I want to enjoy the challenge of the unknown every single time :P
0 Likes
While you're here, please consider supporting GamingOnLinux on: