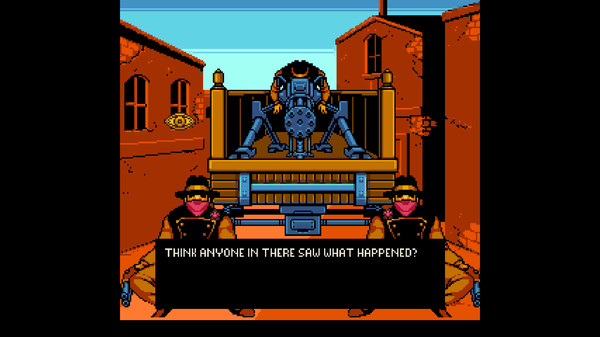 It seems they had a few launch issues on Linux, with the usual well-known Unity full-screen problems. If you don't get a mouse cursor, run this as a Steam launch option to run it in windowed mode:

That enables the mouse to actually work!

I've tested it out a little and it seems to be quite interesting, with some really retro visuals. It has a funny mechanic where dropping the cursor to the bottom and pulling it back up draws your gun out. However, you can't always do that and the game politely tells you off when you're not allowed. I thought it was a little amusing. The writing seems quite fun too, light-hearted as it doesn't take itself too seriously but it's quite nice.

Certainly worth a look, especially as it's free you have nothing to lose.


QuoteDead Horizon is a short and dirty point and click adventure game for your home computer system. Play as Bonnie Starr, a former farmgirl turned infamous pistoleer as she attempts to gain redemption at the end of a gun.

Dead Horizon is inspired by the light gun games of old. No, not Area 51, Time Crisis or Virtua Cop. The real old ones, like the original Wild Gunmen, Namco Quick & Crash, and Mad Dog McCree. This game was inspired by those and the developer's own fascination with westerns and their machismo focused story lines on masculinity, murder, and guns. This game has all those things, and more! And it's 100% free! And very, very short.

View PC info
I also tested it for a few minutes... and reached the end of the game. This one is seriously short. But it's free so that's all right. A bite-sized shootout-simulator for a short coffee break.
0 Likes

View PC info
Is it on itch.io anywhere?

UPDATE: Indeed it is. You can get it DRM-free here: https://pixelwestern.itch.io/dead-horizon

Strange they are using rar for downloads.

View PC info
I just tired itch.io version - the mouse simply doesn't work in the game. Did anyone get this issue?
0 Likes

Quoting: ShmerlI just tired itch.io version - the mouse simply doesn't work in the game. Did anyone get this issue?


Just add the above to the command line to run in a window instead of full screen, just like it says in Liam's article.

Unlike Liam, I saw a cursor but it just didn't move in full screen mode. A bit of a bother as I don't like playing in a window, but in this case it was acceptable.
0 Likes

Quoting: tuubiA bit of a bother as I don't like playing in a window, but in this case it was acceptable.

Actually, you can set it permanently in:

And in KDE I can stretch it as fullscreen with F11, and mouse works fine after that.
0 Likes

NOX LinuX 23 Aug, 2017
View PC info
I'm gonna give a try to this reto-westrn game that are my favourite by the way thx for posting the free games dead horizon and shadow warrior(2013)!!!!!!
0 Likes
While you're here, please consider supporting GamingOnLinux on: