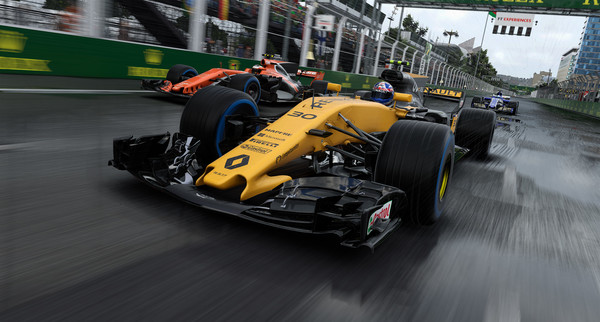 Suprised? No? Okay. After Feral Interactive [Official Site] directly asked to see a demand for F1 2017 and then the official F1 2017 twitter account had a little leak, F1 2017 for Linux has turned up on SteamDB.

Now this has popped up on SteamDB (it's a long one, but here's a glimpse):

There's a lot more to indicate it, so it may very well end up coming to Linux. I bet there's going to be a number of happy faces in our comments if it does get officially announced.

The game has just released today with Windows/Mac support, with the Mac version done by Feral.

Will you buy a copy if it does come to Linux?

Article taken from GamingOnLinux.com.
Tags: Feral Interactive, Racing, Steam
17 Likes, Who?
We do often include affiliate links to earn us some pennies. We are currently affiliated with GOG and Humble Store. See more here.
About the author - Liam Dawe

faceless 25 Aug, 2017
View PC info
The reviews for the game are quite good, if it comes to linux it will be a great addition and I'll also buy it!
3 Likes, Who?

fagnerln 25 Aug, 2017
View PC info
Codemasters create great games, I LOVE GRID 1 (it's my favorite race game ever), GRID 3 is ok, Dirt 2 was awesome, and I enjoyed F1 Race Stars. But I'm not a huge fan of their simulators (Dirt Rally was frustrating to me, and my cpu sucks in Open GL).

I want to support Feral, but I would be happier with Dirt 4...
0 Likes

View PC info
But the real question is... will it run with Vulkan ;)
0 Likes

View PC info
Hmm. As I said before, although I'm a huge fan of driving games and of F1, the combination of the two just never seems to grab me in the way you'd expect. Never say never, though. It does look good.
0 Likes
Darkdisorder78 26 Aug, 2017
Must be an error. That has happened before right?
0 Likes

View PC info
So they managed to port the game more or less overnight after asking if people wanted? Including securing permissions?

That or they decided to port that game LOOOOOOONG before asking in public.

View PC info
It is not my favourite genre but I am going to get it nonetheless.
1 Likes, Who?
habernir 26 Aug, 2017
Yes i will buy it !!!!
1 Likes, Who?
1/5»
While you're here, please consider supporting GamingOnLinux on: