While 'asset flips' are becoming a common occurrence, pre-made art assets are still a valuable resource when used correctly. Asset Forge and Kenney assets might be quite useful!

Asset Forge [Official Site] sounds like a really clever tool. Like sandbox games where you build using blocks and stick them together, Asset Forge works in a similar way with it giving you a bunch of pre-made blocks to stick together to make assets for games. The great thing about it? The editor has a Linux version! For people like me who love to tinker and create, but have zero artistic skill it sounds awesome.

Once finished, you can export your creations for use in many different game engines like Unity, Unreal, Construct and plenty more. They can export to PNG, OBJ models and FBX models.

It's created by Kenney [Official Site], who actually make fully pre-made assets either for free or for a cost. What makes me really quite like their work, is that there's no strings attached as you get them under a public domain license. Here's an example of the quality of what they offer, this is from the Space Kit which is under the CC0 1.0 Universal (public domain) license: 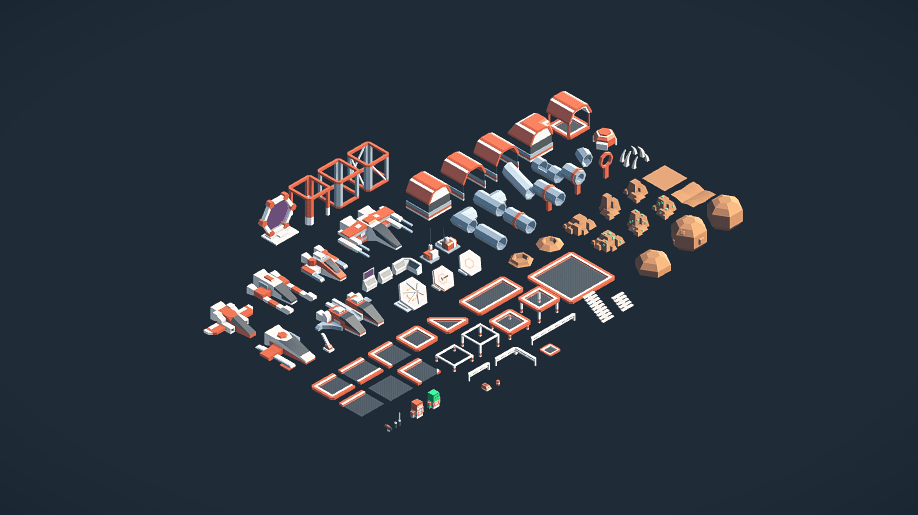 Kenney have a bundle of their assets for sale on itch.io currently too. With 13% off three asset bundles, it will give you thousands of assets to use however you want, since they license their creations under a Public domain license. It seems the packs of assets they sell, include a lot of resources that are unique to each pack, but still you get the freedom to do with them as you please.

Next time I want to tinker with a game engine, I will probably look to some of these to play around with. Their stuff looks good and it's a really great license choice.

Gobo 1 Oct, 2017
View PC info
I really like the assets released by Kenny. They have tiles, sprites, sfx and models. And the images come with texture atlas files as well. Some of those packs are huuuuge!

And it is not like someone whipped them up in MS Paint in 10 minutes either. And some of the assets are in use in games on steam as well already, even featured in the games banner graphics.
0 Likes

View PC info
As a budding programmer who was always interested in game development, but overwhelmed by the art asset portion, this is awesome. Thanks for the write-up, it answered questions I've had for years about how a fiscally restricted developer who doesn't have the skill and/or time to invest in artwork would possibly go about putting a game together.

And your articles on game engines like Unity and Godot have answered questions about that part of game development. It's wonderful to have this resource that I visit as a gamer inspire me to create as a programmer. Thanks, man.
2 Likes, Who?

elmapul 1 Oct, 2017
View PC info
that is great, there are a lot of asset stores out there, but many of then dont have assets that match it other.
each asset is on an different style.

not in this case! all the assets combine with each other.


that is great for individual developers, or people who just need place holders before they replace it with the final version.
or has the patreon quote, teachers/students learning how to make an game


Last edited by elmapul on 1 October 2017 at 8:08 pm UTC
0 Likes
While you're here, please consider supporting GamingOnLinux on: