Short on games to sink endless hours into? RPG MO [Steam, Official Site] is a free to play MMO that has full Linux support. 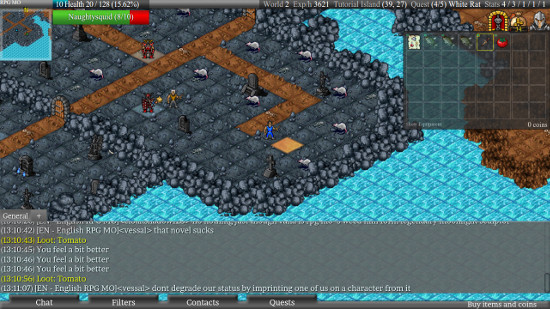 It's rather retro, which might limit the appeal somewhat. There's limited animations, the art is all rather low-res and it's pretty slow to get going. Thankfully, it does have options for scaling the interface and making the graphics bigger, so you're not forced to read tiny text.

What I do like about it, is that it can be played in the browser, as well as downloading it—handy!

Sadly though, it does feature micro-transactions. That's not always a bad thing, if for example it was just cosmetics it wouldn't actually bother me at all. In RPG MO, it seems you're also able to purchase weapons, accessories and so on that do change your attributes. To me, that can end up feeling like a pay to win game, so I wasn't pleased about that.

The combat system is interesting, with it based on different stances. Each stance trains different skills, with one of them being a balance between all of them. I quite like that, since it allows you to decide on what type of fight you're going to be. However, the combat seems rather repetitive and slightly dull, since there's very little to it other than click and watch.

There's also a magic system, but the game is so retro it seems you can't do ranged magical attacks. You need to be right up next to any kind of enemy to fight them, which was disappointing. It seems this is based around the design of the game, with creatures never seeming to move.

I did encounter a real annoyance too, since actions don't seem to require any kind of stamina or interaction other than click item and wait, an anti-bot captcha popped up that I had to complete. That's the kind of nuisance I really don't want to see when I'm trying to get into a game.

I'll be completely honest, I don't get the appeal, I'm just highlighting it in case there's any of our readers who do enjoy these retro slow burn MMOs. If they added proper ranged attacks, more animations and roaming creatures I would probably find it more interesting. However, I understand fully I'm not the target audience since I generally prefer at least slightly more modern games.

It's being developed by only two people and they celebrated five years of the game back in July. It seems they do have other contributors for things like music and graphics, but still, that's pretty impressive going.

View PC info
I spent way too much time in that one, a few months ago. I wrote an article in french if you have any interest in it http://jeux1d100.net/blog/2016/12/rpg-mo-un-mmo-rpg-avec-des-pixels/

The main, huge, wall for me, was that after a while, i completely loose the point of the game. After Wood Quality 1, you can go to Wood Quality 2. Then QL3. Then QL4. But, the gameplay at its root is exactly the same.

I do love their XP boost however. Instead of a personal boost, when you buy a XP potion and apply it, you give the entire server a boost. It's shared. It's super awesome idea, as you still get benefits from your real money, but you also make the other players happy. It's the opposite of usual cash shop, where only the rich players IRL could really benefit from these kinds of potions, creating nothing but rant.

It's way too grindy to play more than a few weeks, to my taste, but it really is a great grind-MMOG, actually.
1 Likes, Who?

sarlej 12 Oct, 2017
View PC info
Do you guys know any other mmo, which can be played in the browser?
0 Likes

View PC info
I tried playing that for a while about a year or so ago. It's grindy as hell, in fact that's the entire game. It's pretty much only grinding. There's no lore, there's not much interaction between the players (outside of PvP which I didn't try), no raids that I'm aware of. There's house building, which pretty much everyone was into, and that's really about it.

Otherwise it was "kill 8 of this monster", then "kill 12 of that monster" with absolutely no variation and no real reward. After a while it just got pointless.
0 Likes

Quoting: sarlejDo you guys know any other mmo, which can be played in the browser?

Runescape ?
0 Likes
While you're here, please consider supporting GamingOnLinux on: