PLAY WITH ME, a mixture of horror and puzzles inspired by the SAW movies should come to Linux

The developer of PLAY WITH ME [Steam, Official Site], a horror and puzzle game inspired by the SAW movies is looking to bring the game to Linux.

I came across the game randomly while searching Steam, so I reached out to the developer on their forum to ask about Linux support. Their reply was both amusing and unexpected:

Hi bro, you looking this: 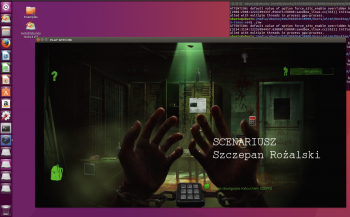 Sometimes it's a flat-out no, sometimes it's a maybe and then there's times like this when I get something unexpected like a working screenshot of it on Linux. The developer has so far only tested it on a USB where it didn't perform well, so I've made them aware about NVIDIA drivers on Linux to try it properly. They're looking into it and I might be helping test it, if all goes well hopefully it will see a release.

See how a game created by the very Jigsaw would look like! Use the available objects, outwit tricky illusions and optical puzzles and above all, answer the question – will you dare to Play with Me? Step into the world inspired by the movie SAW  .

An investigative journalist, Robert Hawk, together with his wife Sara disappears in mysterious circumstances. The police find only their wreck from the car crash. According to the suspicions of the investigation officers, a man called „Illusion”, a serial killer about who Hawk has been writing investigative articles for a long time, may have something to do with their disappearance. Apparently, he was very close to discover his identity with the help of his friend, private detective Patrick Clark. Now, as a result of the accident, Hawk finds himself in the “Illusion” and he has to get through a maze of puzzles in order to survive.

Quoting: tumocsNo, I won't play with you Liam.

That was a nice suprising answer indeed, and the game looks interesting.

View PC info
It looks sort of like those hidden object puzzle games & as I have at least 50 of those already in my library I think I can squeeze another one in. :D
0 Likes

View PC info
Indeed it does look like a hidden object game , but the theme sets it apart enough to be worth a look.
1 Likes, Who?

View PC info
I played the Demo a few days ago on my Windows notebook that I usually work with at my company.
I was really impressed by the atmosphere/immersion of the game.
Even if the puuzles are hard to solve (I made it only to the second room until now) I would buy it immediately if it comes to Linux.
1 Likes, Who?

Quoting: HoriLooks nice. Unfortunately for me, 2D horror games are anything but horror for me :(

I haven't played it myself, but they say Darkwood manages to scare you in 2D. Did you give it a try?

Quoting: HoriThey never manage to give me a scare unless it's 3D (in which case they immerse me so much that I almost forget it's a game and I genuinely fear that trying them in VR could give me a heart attack)

A games journalist from my favorite PC games magazine said she could not even make it into the house playing the new Resident Evil in VR. :O
0 Likes
While you're here, please consider supporting GamingOnLinux on: