Announced on their Kickstarter update back in March, where they announced their public Alpha release for backers, they also detailed what's to come for Jupiter Hell in their next build due in June. Turns out, Vulkan support is going in. I would have noticed sooner, but since I backed the game at the "Early Access" level I haven't been following it too deeply with all the alpha-related information coming in.

As a reminder, here's how the developer describes it:

Jupiter Hell is a roguelike set in a 90's flavored sci-fi universe. Set on the moons of Jupiter, the game pits a lone space marine against overwhelming demonic forces. Rip and tear zombies, demons and unmentionable monstrosities, using classic weaponry, including (but not limited to!) shotguns, chainguns, railguns and the trusty chainsaw. All to the shine of CRT monitors and the tune of heavy metal!

Dive deep into a true form of the 30 year old roguelike game genre that has resurged in popularity. Experience turn-based, grid-based permadeath and fully procedural levels, all in glorious 3D visuals. Get ready for the spiritual successor to DoomRL, the parody roguelike that years ago streamlined the traditional format and popularised a new wave of accessible roguelikes. Distilled, hardcore gameplay, fast-paced challenge and limitless death all await.

Also, for those who don't know, they also made DRL (D**m, the Roguelike), previously called DoomRL until ZeniMax came knocking. 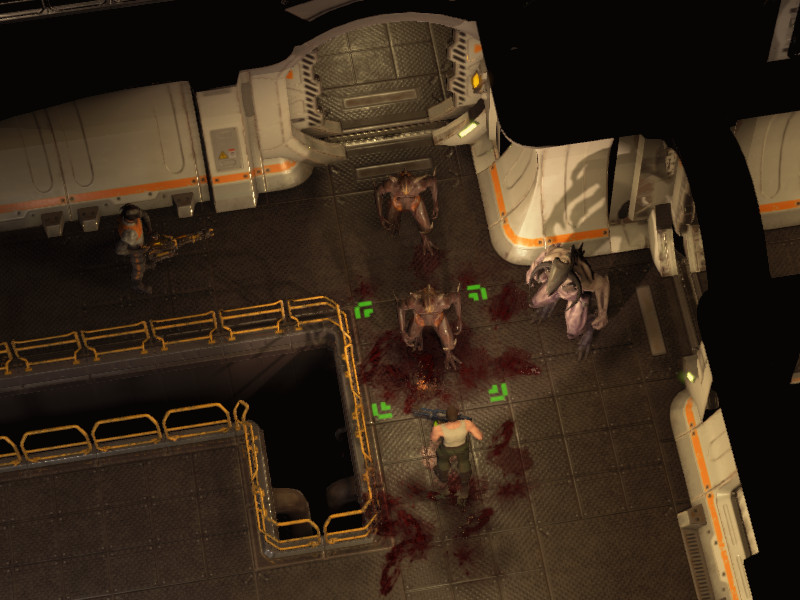 I spoke to the founder of ChaosForge, Kornel Kisielewicz, on Twitter where they explained the reason for moving to Vulkan was in fact due to the poor OpenGL support on Mac. They're going to be using MoltenVK since it's now open source! They said it's a "great excuse" as they wanted to use Vulkan anyway.

What's impressed me, is that ChaosForge really are serious about their Linux support in Jupiter Hell, especially with the first builds having Linux support.

They also showed off some of their improved physics in the update. This is obviously sped-up a bit though since it's a turn-based game:

They're working hard towards other milestones too, with a Beta release tentatively planned for September so more people will be able to jump in and see what they think. This will include a save/load system, animation improvements, a more complete set of monsters, more environment interaction and so on.

If you're interested, you can learn more and pre-order direct from the official site.

I already backed this game, but didn't noticed that they are going Vulkan as well. Thanks for info Liam.
2 Likes, Who?
PublicNuisance 30 Apr, 2018

View PC info
So the Linux version is currently playable in it's current form ?
0 Likes

Quoting: PublicNuisanceSo the Linux version is currently playable in it's current form ?

Yes, as mentioned the first builds had Linux support :)
1 Likes, Who?

STiAT 30 Apr, 2018
View PC info
First impact of MoltenVK being free. It made the use of Vulkan more viable due to having all platforms on board. Good stuff, and that one goes to Valve.

Sadly, not my kind of game though. But I hope the best for them, the devs seem pretty open, and I like that.

Quoting: GuestBeen watching a few of the dev streams for this game i always pick on him about cleaning up his code it's a good time just look up epyoncf on twitch if you want to watch them make jupiter hell

looking forward to playing this game for sure

Haha, gotta' check those streams. I like when others show their code, and the way they work. I use to be very concerned about cleaning up my mess (because most starts out with can I do it? and ends up being useful requiering refactoring).
1 Likes, Who?

Persistent death and generic levels, monsters, side quest.
1 Likes, Who?
While you're here, please consider supporting GamingOnLinux on: