Star Ruler 2 from Blind Mind Studios has officially become open source and not just the game engine, it seems it's the whole thing. 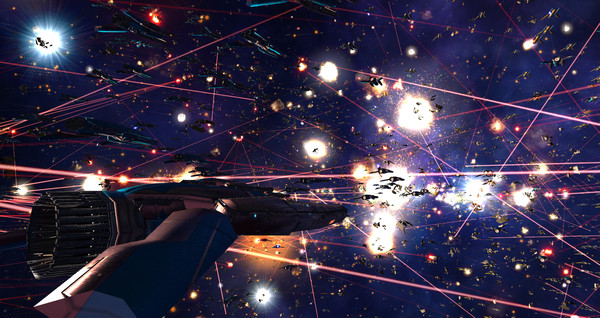 Writing on their Steam forum yesterday, the developer said this:

Hi everyone! It's been a few years now since Blind Mind Studios went inactive, so we figured if we're not doing anything with the code to SR2 we should just release it under an open source license.

If anyone is interested in seeing how the engine works, or tweaking whatever, the code for SR2's StarFlare engine is now fully available at https://github.com/BlindMindStudios/StarRuler2-Source

The repository includes build instructions for windows and linux, but no prebuilt binaries, this does mean everyone can play the game for free, but you will have to put in some extra effort to build it first.

If you're not going to do anything with your game any more, that's a pretty awesome thing to do for the community. They deserve a pizza or two for that.

The entire code for the game engine is under the MIT license, with art assets, images and 3d models are licensed under the Creative Commons CC-BY-NC 2.0 license (a non-commercial license). It even includes the Wake of the Heralds DLC Expansion! There is one caveat though, the music is not included but it can be detected and played if you own it—likely as they licensed it from somewhere else (a very common thing).

I did take an early look at the game way back in 2015 and it was quite a different experience, so now hopefully more people can join in and see what they think and perhaps continue the effort.

Article taken from GamingOnLinux.com.
Tags: 4x, Indie Game, Open Source, RTS, Strategy | Apps: Star Ruler 2
21 Likes, Who?
We do often include affiliate links to earn us some pennies. We are currently affiliated with GOG and Humble Store. See more here.
About the author - Liam Dawe

If BossKey Productions - Nexon would do the same thing for LawBreakers ; that would be good.
0 Likes

View PC info
I thought I'd give building it a try, expecting no end of trouble and, ultimately, complete failure. But it worked like a charm. It's understandable that they couldn't include the music, although it makes it feel a bit strange.

All in all though, this is an incredible gesture. If only more developers would put the official seal of approval on their “abandonware” like this.
3 Likes, Who?

denyasis 23 Jul, 2018
View PC info
Many kudos to these devs. Will be compiling tonight to see if it'll run on my old laptop.

If it works for me, I'd consider buying it for the music and to support the dev.
5 Likes, Who?

View PC info
Massive respect to these devs, I'm not into 4X games since I suck at them but I'll make an exception for this and buy it at the end of the month. I wish more people did this.

Quoting: denyasisMany kudos to these devs. Will be compiling tonight to see if it'll run on my old laptop.

If it works for me, I'd consider buying it for the music and to support the dev.

Agreed. Hearing this makes me want to actually purchase it now. :) I just want to be sure the devs actually get the money.
0 Likes

View PC info
As odd as it sounds I kinda want to buy it, mostly because I've been trying to buy as many Open-source games on Steam that I can find.
2 Likes, Who?

View PC info
Hey Liam, you can update your Steam curator review to reflect this change as well. I see those reviews of yours there and a game being FLOSS would make me want to give them money. Although in this case im not sure if the right people would receive it and moreover if there would be any connection to the open-sourcing for them. Id like to be more clear in my expenditures.
1 Likes, Who?

View PC info
Probably the best gaming news this year :) This has the potential to become an ever green like Battle for Wesnoth!
0 Likes

I made a package for it in AUR right away :D And yes this makes me want to buy it too. But only if the actual devs get the money.

link to the aur package
2 Likes, Who?

View PC info
I quite enjoyed SR1, if only the tutorial (in which I must have spent 6 hours or more), but that was on windows and a while ago.

I bought SR2 as well a few months back, but didn't get around to play with it. It seemed quite a recent (and decent) game to me, even if reviews seem to deem it unbalanced. So I am quite surprised with this move.

I can't wait to see what the community will do with it! I wish well to the developers as well.

Quotethis does mean everyone can play the game for free, but you will have to put in some extra effort to build it first

Edit: what I mean with rude is anything that would offend the developer, and would put off other developers that might otherwise be tempted to do the same.

This strikes me as odd, as MIT doesn't prevent binary distribution at all...
Anyway, the devil is out of the box... Would it be considered rude to put it up on FlatHub?