Warhammer 40,000: Gladius - Relics of War is out with Linux support

Warhammer 40,000: Gladius - Relics of War, a 4x strategy game from Proxy Studios and Slitherine Ltd is officially out. 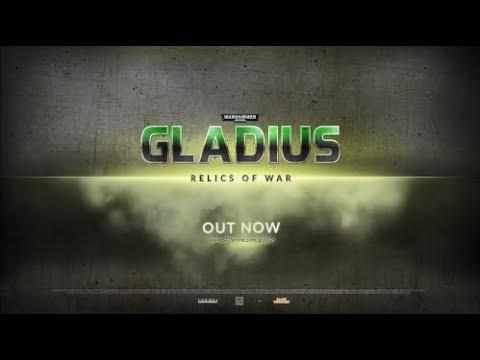 This is just a short announcement post for now as we didn't have any advanced access on it, so full thoughts on it will have to wait. Thankfully, GOG did provide us with a key which unlocked today. I can at least confirm, that it does seem to run fine on Ubuntu 18.04.

Honestly, from the short time I played so far it already seems quite familiar to Pandora: First Contact, the previous game from Proxy Studios (likely a fair bit re-skinned from it). Not actually a bad thing, just more of an observation. For anyone who has played a game like Civilization, it should all feel pretty familiar except with a Warhammer face.

It does seem like it could be quite good, but I will reserve my proper thoughts once I've had a chance to play more. Just glad to see it run well with Linux support from day 1.

Explore. Expand. Exploit. Exterminate: You can grab it from GOG, Humble Store and Steam.

Article taken from GamingOnLinux.com.
Tags: 4x, GOG, Humble Store, Steam, Strategy
16 Likes, Who?
We do often include affiliate links to earn us some pennies. We are currently affiliated with GOG and Humble Store. See more here.
About the author - Liam Dawe

PlayX 13 Jul, 2018
View PC info
I just did have an 4 hour online match with 5 other guys (windows users) funny thing was the game crashes for them a lot and they have to reconnect. but not a single crash for me in the game. ;-)
at the end I lost, but it was funny
8 Likes, Who?

View PC info
Got it on my wishlist, hope to pick up the GOG version sometime soon.
0 Likes

View PC info
I think I'm more interested in Battletech than this, but we'll see what reviews say.
0 Likes

QuoteExplore. Expand. Exploit. Exterminate: You can grab it from GOG, Humble Store and Steam.

You can also grab it from Slitherine shop (Steam key included).
0 Likes

View PC info
I really liked Pandora, and if it has obviously lots of similarities, Gladius plays differently. A guy wrote a large list of comparisons on Steam, quite accurate according to me : https://steamcommunity.com/app/489630/discussions/0/1727575977578265427/

QuoteA list of all gameplay differences between Pandora and Gladius can become pretty long, but let me get started. Let's seen whether I run out of time or out of differences first.

Gladius has no diplomacy. There is only war.
The factions in Gladius are way more distinct than the factions in Pandora.
Gladius has no world-wrapping. The maps have "edges" like a board-game and represent only a particular part of the planet.
While Gladius has only 4 factions, the game-setup allows for duplicates. I actually couldn't see any limitation of how many opponents you can cram in. I stopped counting at 30. At that point I started with 4 other factions directly in range from where I spawned.
Gladius uses one-unit-per-tile, whereas you can stack units in Pandora.
Gladius does not have a unit-construction-kit, instead it has pre-defined units which vastly differ for each faction.
Almost all units in Gladius have at least one, if not several special-abilities.
There's hero-units in Gladius which gain 1 skillpoint every time they level up, which grants them additional abilities or improves existing ones. They also can equip items.
Except for the usage of artillery, when units fight in Pandora, the fight will always result in one unit dead and one unit damaged. In Gladius units take an amount of damage determined by their weapons and hit-chance and fights between similar units would last several turns.
In Gladius the unit that is being attacked doesn't attack back at the same time it is attacked. Instead there's an "overwatch"-mode where units shoot at enemy-units that move into their range but only if they did not attack on their own turn. Melee-Weapons and special-abilities are not used in Overwatch-Mode.
In Gladius there's a lot of different weapon-types that have different effects and are good against different things. For example melee-weapons are useless against flying units.
In Gladius cities can defend themselves.
In Gladius cities cannot be captured, only destroyed.
In Pandora each point of population would immediately pick up one of 4 jobs, in Gladius a point of population that has no working-place will just do nothing.
In Pandora buildings granted a benefit for the whole city. In Gladius a building provides a working-place for a population-point and each building-type essentially offers a different job.
In Pandora all buildings fit in the one tile the city was on. In Gladius each tile supports a maximum of 3 buildings and requires your city-borders to expand first before constucting new buildings.
In Pandora you could have 1 of each building-type. In Gladius you can have as many buildings of any type as you have space to build them on.
In Pandora each city has one building-queue for everything. In Gladius some building-types add new-building-queues for different things.
In Pandora building things drains the resources it costs turn after turn. In Gladius you pay the price for your next production up-front and building-time is independant from the resource-cost.
In Pandora everything you build essentially costs minerals. In Gladius things can cost all sorts of thing.
In Pandora buyout becomes an important part of how you produce things later in the game. In Gladius only one faction has the ability to buyout at all and it's rather expensive and the cost is ontop of what you already payed to even start the production.
Pandora had tile-improvements to increase the output of tiles people work on. Gladius has this concept built into the buildings you build.
In Pandora some tiles would not generate yield of a particular type of resource. In Gladius you can build any building on any tile but each type of tile has bonuses for certain buildings/resources.
The tile-improvements in Pandora were built by formers. The buildings in Gladius are built by a particular type of building which you happen to get one of for free with each city.
In Pandora the maintainance-cost for units soon became irrelevant. In Gladius the maintainance is very significant.
In Pandora the maintainence of units all cost the same resource. In Gladuis the resources required to pay for maintainance differ depending on the kind of unit in question.
In Pandora population-growth depended on existing population and was exponential. In Gladius population-growth depends on unused habitat and has a cap which leads to linear growth-speed.

I'm sure there's quite a bunch of things I forgot, but I think it is enough to show that it's not just a reskin but has completely different game-design in a lot of important aspects.

Quoting: TcheyI really liked Pandora, and if it has obviously lots of similarities, Gladius plays differently. A guy wrote a large list of comparisons on Steam, quite accurate according to me : https://steamcommunity.com/app/489630/discussions/0/1727575977578265427/


Thanks for pointing out. I was afraid that this is 'just' an asset flip but it looks like they really made their homework. I really tried to like Pandora but it drove me nuts on occasion. Especially the diplomacy, the way population grew without control, "just another tier" tech, the upgrade orgy, the late "money is all" game and even the victory conditions (just bunk some bucks and you win??). "Story" is always the same and get's tiresome fast. A lot of wasted potential. IMHO. I played Pandora some time again lately for another chance and it's simply missing the "One more turn..." effect that CIV [and CIV:BE] have in for me. Technical no issues tho. Runs and did always run smooth, zero crashes and light on the resources.

This comparison reads really well for me. So this just ranked a lot higher on my wishlist :D
2 Likes, Who?

Do you get a DRM-free version there?
0 Likes

Do you get a DRM-free version there?

As far as I know, you will also get download link for DRM free version.
0 Likes

View PC info
It runs nicely, played it a bit yesterday, but I had to delete ~/.local/share/Steam/ubuntu12_32/steam-runtime/pinned_libs_64/libstdc++.so.6 because it's too old for the game to run. Using the current Steam beta client.

Plays like a combination of the type of old-school tactics game Slytherine makes and Civ.