System76 [Official Site], the hardware vendor that focuses on putting out well-supported Linux laptops, desktops and servers are teasing something new. 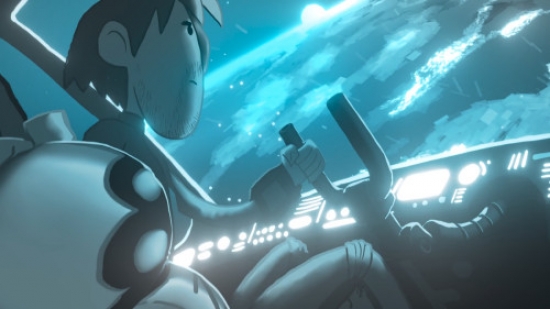 I've been following their CEO Carl Richell on Twitter for a while, watching the progress they're making towards their new desktop line and it's always fun to see the pictures. It's good to see a Linux hardware specialist doing so well that they can setup their own full production line.

As for the teaser, named Thelio, which could end up being the actual name for their new unit here's what they said:

System76 is releasing a new open-source computer, available for preorder next month. In the coming weeks, before the finalized hardware is announced, a four-part animation will be released weekly, with design updates hidden within a game portion of the story.

The story itself contains different worlds, each representing an antithesis to open source ideals. These themes are utilized to draw attention to the importance of open source in the evolution of technology. The parallel drawn between open source and the Thelio computer also helps System76 celebrate its milestone as the company transitions to manufacturing its own open hardware. CEO Carl Richell has been striving to achieve this goal since the company’s inception in 2005, and is eager to bring the new hardware to customers and open source fans alike.

Part of the problem with a lot of places, is that they're all essentially doing the same thing and only competing on price and delivery. So we're now going to have a Linux hardware vendor doing something truly unique, that's why I find this so exciting.

Article taken from GamingOnLinux.com.
Tags: Hardware, Teaser, Upcoming
28 Likes, Who?
We do often include affiliate links to earn us some pennies. We are currently affiliated with GOG, Humble Store and Paradox Interactive. See more here.
About the author - Liam Dawe

View PC info
See how the wheels have really started to roll in the world of Linux! we're about to get wings, too...

Ps. Not sure if my name used here is that suitable at moment due the recent CoC mess and its reasons XD
0 Likes
elmapul 27 Sep, 2018
its not Thelio, its Thel.io , like in itch.io

"animation"
not really an animation, more like animatics:
https://www.youtube.com/watch?v=AXxk8GsR4So

View PC info
Is it going to be a RISC-V system?
2 Likes, Who?

wvstolzingIs it going to be a RISC-V system?

I hope so, that'd be great! Problem is no games or anything binary will work on it, but then again... open source computer! They didn't really say if that was going to go into laptops as well, did they?
0 Likes

That's simply not true, which you could have discovered yourself if you've visited the link you are talking about.
2 Likes, Who?

View PC info
Wow, that's super cool! I hope it will be practical and not mega mega expensive at some point!
1 Likes, Who?

"animation"
not really an animation, more like animatics:
https://www.youtube.com/watch?v=AXxk8GsR4So

We literally quote them saying it in the article.
0 Likes

wvstolzingIs it going to be a RISC-V system?

I hope so, that'd be great! Problem is no games or anything binary will work on it, but then again... open source computer! They didn't really say if that was going to go into laptops as well, did they?

Even if it's as functional as a Chromebook, that would be a huge deal; though as of right now, I believe only one RISC-V dev board that is able to run Linux exists (the 'HiFive Unleashed' ), and it costs $999. Also, the expansion board that turns it into something more capable costs $1999. So maybe it's not feasible yet commercially?

View PC info
The theory is, that once it's out of development and the demand is there, the price will go down. The whole supply/demand thing. I at first thought this was going to be like the Librem laptops, where they yank all the Intel ME stuff out. But I've been waiting for a RISC-V board.... I would love to use a fully open source system for work or something.
1 Likes, Who?

View PC info
I want to believe, but its probably going to be all Intel and Nvidia and really just going to be a marketing gimmick. If they really cared they would've made an AMD based product by now.
5 Likes, Who?
1/4»