GDevelop [Official Site] is an open source cross-platform event-driven game engine that's quite promising. It's currently closing in on a new major release and it's also now on itch.io. GDevelop 5 is currently in Beta and has been for a while with the 55th iteration released around 10 days ago.

What do I mean by event driven? Well, instead of writing out vast lines of code you drag things around in a visual editor and attach events to various actions and behaviours. Here's an example, a screenshot I took from the events section of their space shooter example game (many more examples here): 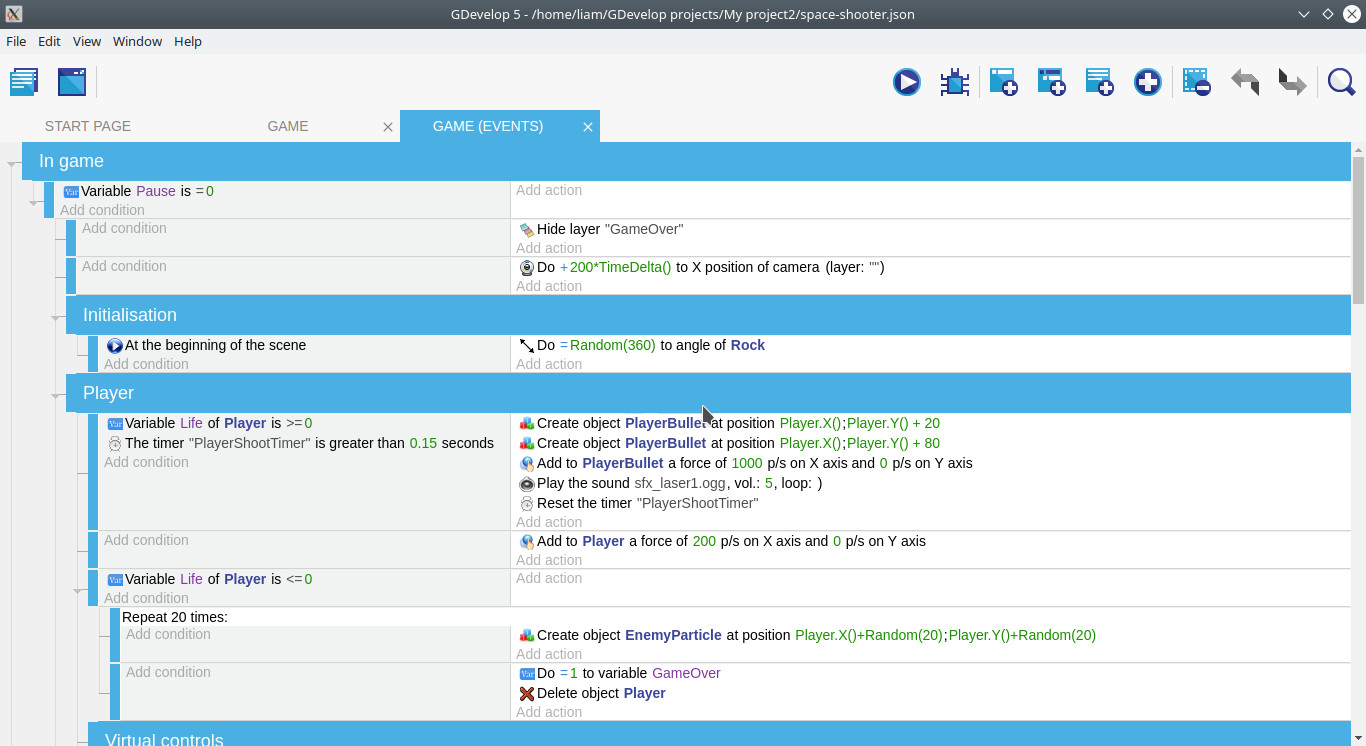 It can be compared to Clickteam's Fusion or Scirra's Construct, unlike those tools GDevelop is free and open source.

There's plenty of built-in behaviours to help you make various types of 2D games, along with an extensions system that's used for the built-in features.

After trying it out some more today, after not following GDevelop for a while I'm genuinely surprised at how far it has come. It looks a lot better, it's a lot more stable and it seems to be quite a bit more powerful too. Looking forward to watching this continue to progress.

I am the owner of GamingOnLinux. After discovering Linux back in the days of Mandrake in 2003, I constantly came back to check on the progress of Linux until Ubuntu appeared on the scene and it helped me to really love it. You can reach me easily by emailing GamingOnLinux directly.
See more from me
Some you may have missed, popular articles from the last month:
The comments on this article are closed.
13 comments
Page: «2/2
Purple Library Guy 4 Nov, 2018

isnt that what package managers suppose to do...
sigh.

yeah, looks like the fragmentation leads yet again to people reinventing the whell, because its too hard to support all distros otherwise.

steam became the norm, since we were busy competing instead of cooperating

That isn't a whole lot really.

But I'm not sure it's relevant. Games are different from other stuff, package management wise. Culturally, and because most Linux games are closed source and cross-platform, whereas most other Linux software is open source and often Linux-only, or even if cross-platform dominated by its Linux use. This game engine is open source, and no doubt the developers have a fondness for Linux because Linux is the centre of gravity of open source stuff, but it probably isn't primarily for Linux users. So its main method for being acquired isn't going to be through Linux distros, it's going to be through portals that Windows and maybe Mac people use, and because it's a game-related thing, that will be a game portal.
Long story short: Normal Linux software comes from your distro's software manager thingie, game stuff comes from Steam or GoG or Itch. There is nothing to be upset about here.

1) A large family of distros using apt with a graphical front end, whether Synaptic or something called "Software manager" or something

out dated softwares, with an outdated list of what is avaliable for linux.


"This game engine is open source, and no doubt the developers have a fondness for Linux because Linux is the centre of gravity of open source stuff"
that explains why construct didnt had an version for linux? sigh

"There is nothing to be upset about here."
except that canonical made 0 dollars on their store, and now they dont care about the desktop anymore, the ones who do is valve.

I'm not clear what point you're making.

Quoting: Purple Library GuyI'm not clear what point you're making.

I'm not either, they lost me completely.
0 Likes

View PC info
As an avid Construct 2 user. I check Gdevelop from time to time to see if I can switch. Most of the time I revert back to Construct 2 due to it being more friendly and stable and feature rich. Guess it's time to check Gdevelop again.
0 Likes
«2/2
While you're here, please consider supporting GamingOnLinux on: