Jupiter Hell is a roguelike I'm following with great excitement, it's serving a the spiritual successor to DRL (previously DoomRL, now called DRL since ZeniMax flexed their legal muscles) and it's looking good.

After a rather successful Kickstarter, where they managed to get over £70K in funding it's coming along rather nicely.

It feels very much like a classic roguelike, with plenty of modern touches. I do love roguelikes, but I don't often love how basic they make things which is why I'm so happy with Jupiter Hell. It keeps some of the simplicity like a very basic interface and controls, while having up to date and quite impressive visuals. Their Linux support has been great too, they're serious about supporting Linux with support being in very early.

Since I'm a backer, I've been testing it out here and there and I come away very impressed each time. Here's an early preview of the game, do keep in mind it's far from finished: 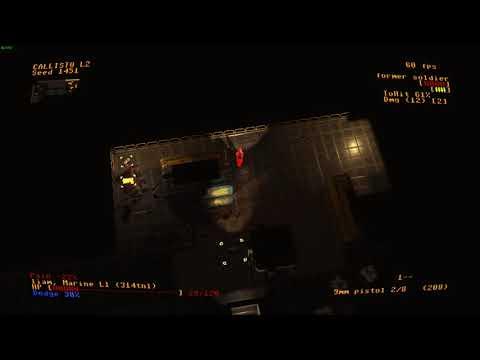 It's running beautifully considering it's still far from finished, quite a challenging game too. It manages to capture the mood and spirit of games like Doom from a rather different viewpoint. Being able to manually target is nice, so you can blow up barrels and watch the fireworks as rubble spreads across the screen—what joyous destruction, hope they expand the destruction system for sure.

While it is really good, it's obviously still early. I'm hoping they plan to include more things to find and do inside the levels themselves, right now what you actually do is quite basic. Fun enough to keep jumping back in, but to keep me interested in the long run it needs more interesting things to find while exploring.

As far as future updates go, they are planning to finish the Vulkan support; improve the level generation; include more items, traits, master traits; new weapons and plenty more.

You can find out more on the official site, along with wishlisting and following it on Steam.

View PC info
What? They let you step up your pledge?? This is cruel and unfair!
:O :P
Ok.. ok.. it's for the greater good! They are quite committed to Linux, and I really hope it all works out! The game looks really great .. that is .. from afar.. ;-)
0 Likes
ProTexanist 16 Dec, 2018
This looks like it plays identically to DoomRL, which is a good thing. I cannot wait for the final release.
0 Likes
Drakker 16 Dec, 2018

View PC info
I know it's common for text roguelikes to have this kind of controls (F to shoot, G to grab, etc, using all the keyboard), and I have played original DoomRL, but it's strange to see the same in a 3D game. I'd rather prefer more simple and modern controls. What about mouse and gamepad support? Is it there or is it planning?
0 Likes
While you're here, please consider supporting GamingOnLinux on: