WARP-TEK, a rather frantic horizontal shooter is out, developed on Linux

With a great soundtrack and a simple visual style, the horizontal space shooter WARP-TEK has been officially released today. Note: Key provided by the developer. 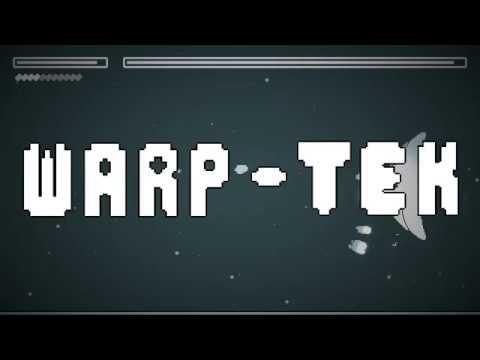 One for those who like their more simple and back to basics experiences, with gameplay that ends up becoming quite the bullet hell and it can be a little on the difficult side.

This is especially so, since with the default colour option (which can be changed in the settings) it's very hard to distinguish your ship from hundreds of projectiles and during some boss fights it's insane. A little tweak to that would go a long way I think. The boss fights are great though, quite varied and their different attacks are a real challenge to survive.

Since it was developed on Linux with the open source Godot Engine, I decided to have a quick informal chat with the developer about how that went.

Q: Would you mind introducing yourself and WARP-TEK?

"Sure! :D I'm AlexHoratio, a cool indie gamedev from the UK, and I made a game called "WARP-TEK", which is a space shooter wherein you gotta rescue your poor lil dog from alien dognappers."

Q: What inspired you to make WARP-TEK?

"I think that different components of WARP-TEK kinda came from different areas. A friend of mine made a cool monochromatic game called Squirm, which inspired me to try to make my next game in a monochromatic style. After a couple of weeks and some peculiar adventures in colour-shifting, I decided to implement a system where the base colour would drastically change every few seconds. As for the plot point of rescuing your beloved pet, this also came from ANOTHER friend who off-handedly suggested it as a motivation for my player character. In short, I've completely plagiarized WARP-TEK from my friends. ;) "

Q: You made WARP-TEK using Godot Engine, why did you decide to pick Godot?

"I picked Godot nearly by accident! I was browsing Steam, saw it there as Linux-native software and tried it out. For whatever reason, everything about it just really clicked with me! I definitely didn't have this experience with Unity which I attempted to learn several times, but I just kinda got bored and frustrated each and every time. Maybe I'd have the motivation and knowledge to take advantage of it properly now, but I've got no reason to move to Unity. Godot has everything I need! :D"

Q: How does Godot Engine stack up against other game engines?

"I think it's kinda hard to say because I don't have a ton of experience with other engines, but I have never encountered an issue where I want to do something that Godot can't handle that a more established engine like Unity or Unreal can. I think that because there is such a great emphasis on usability and a smooth workflow in Godot, it's particularly attractive to one-man developer teams like myself where the biggest bottleneck to productivity is usually the time taken to get a feature implemented, tested and iterated upon. A lot of things in Godot seem to take much less time to implement when I've been discussing things with my Unity-using friends like pause systems, save files, input maps, etc. Having said that, it's also possible that all my friends are hacks. ;)"

Q: What other essential tools do you feel developers using Linux should be aware of? What did you find really helpful?

"Man I used like a LOT of software for WARP-TEK, but from what I can remember nothing particularly novel. Aseprite for pixel art, kdenlive for video editing, LibreOffice Calc for spreadsheets and stuff, and Audacity for some brief audio editing. One SUPER useful trick that I did find, while it isn't strictly software, is to create an alias for "egrep -r" pointing at your project folder, so you can easily search for lines of code throughout your project. I ended up using this constantly throughout development, and I'd recommend it to everyone who develops games on Linux."

Thanks for having a quick chat with me, Alex!

If interested, you can find it on Steam, itch.io and Game Jolt right now.

Article taken from GamingOnLinux.com.
Tags: Action, Godot Engine, Indie Game, Interview, Itch.io, Steam
8 Likes, Who?
We do often include affiliate links to earn us some pennies. We are currently affiliated with GOG and Humble Store. See more here.
About the author - Liam Dawe

I am the owner of GamingOnLinux. After discovering Linux back in the days of Mandrake in 2003, I constantly came back to check on the progress of Linux until Ubuntu appeared on the scene and it helped me to really love it. You can reach me easily by emailing GamingOnLinux directly.
See more from me
Some you may have missed, popular articles from the last month:
The comments on this article are closed.
2 comments
CFWhitman 1 Feb, 2019
View PC info

QuoteAs for the plot point of rescuing your beloved pet, this also came from ANOTHER friend who off-handedly suggested it as a motivation for my player character.

This was the motivation in the original Blaster Master as I recall.
0 Likes

View PC info
Well the game is probably good can't tell the game relies on various libraries that it doesn't ship with and that aren't anywhere to be found in Ubuntu's repos...

Sooo I may end up refunding the game if an update doesn't come quick ...

EDIT : contacted the develloper it was just a mistake on his part when uploaded the game on steam he reuploaded in less than 5 minutes the game launches now...


Last edited by TheSyldat on 3 February 2019 at 9:15 pm UTC
0 Likes
While you're here, please consider supporting GamingOnLinux on: