Trapped inside a panic room, can you save yourself and your mafia empire? Save Koch is out

In Save Koch you play as mafia kingpin, Jeffrey Koch, who is under threat from a hidden mastermind trying to take your place. It released last week with same-day Linux support, as the first game from developer Wooden Monkeys. 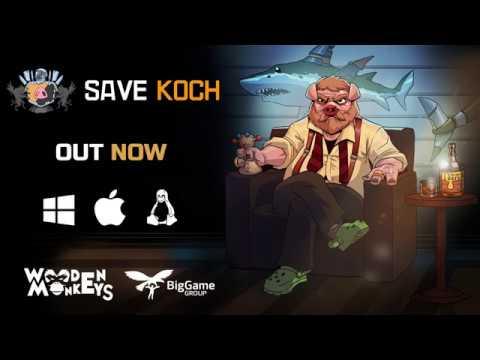 You are local mafia kingpin, Jeffrey Koch. Your empire in New Kandinski is in total chaos because an unknown Mastermind has decided to take your place. And they’ve planted a sleeper Mole inside your operation. It’s time to act, but you need to act smart.

Gather your loyal soldiers and do whatever you have to to stay in charge—hire detectives, torture witnesses, study the clues—do everything you need to figure out who is behind this attack and find the traitor in six days..

Truthfully, this is one game I just didn't quite get the draw of. It feels like a really confusing mess of things all going on in real-time and it acts like you already understand the world and the characters despite being dropped in it without a single thing being explained to you.

Due to the real-time nature of it, Save Koch felt a little messy. While you're having a phone call with someone, a mission might have failed in the background or a new lead might have appeared for you to send an agent on. It didn't really help that missions popped up that suggested I use certain agents, one of them was dead and the other I didn't even have (and the first time I even heard their name in the game)…

My gameplay of it could basically be entirely summarised by "what the hell is going on, what am I doing?". Some games make that confusion fun but not Save Koch.

You can find Save Koch on Steam where it's 15% off until April 26th.

View PC info
I liked the Orwell games.
But in those games , time only advanced when you performed an action. You were not forced to do everythinng real time.
Now i know there were games that relied on everything happening at once - Abbey of Crime , and there was also a point and click game of a murder on a train where all characters moved around in real time.
But like Liam i find the concept to be a bit too chaotic for me.
0 Likes

I just read through some of the negative reviews and they disliked Beholder 1 due to the time constraints generating hectic and distracting from the story. Got an opinion about this?
0 Likes
Purple Library Guy 23 Apr, 2019
On the features, I find myself wondering about anyone who thinks a "Sci-fi noire" genre is "unique".
0 Likes

I just read through some of the negative reviews and they disliked Beholder 1 due to the time constraints generating hectic and distracting from the story. Got an opinion about this?

View PC info
Initially I figured this would be a 5 Nights At Freddie's type game, but it looks like a resource management game... question mark?
0 Likes

View PC info
That's too bad. The theme and art are cool.
0 Likes
While you're here, please consider supporting GamingOnLinux on: