After promising Linux support for Supraland with the launch of the Kickstarter campaign for a sequel, Supra Games have now delivered!

Supraland is a First-Person Metroidvania Puzzle game. The main sources of inspiration are Zelda, Metroid and Portal. Supraland assumes that you are intelligent and lets you play independently. The story is minimal, gives you an overarching goal to pursue, and then sets you free. Despite child friendly visuals, the game targets experienced players. Playtime: ~12-25h

It's popular too, with an "Overwhelmingly Positive" rating on Steam from nearly two thousand ratings so the developer has certainly got a good idea here. It looks really sweet too, check out the trailer: 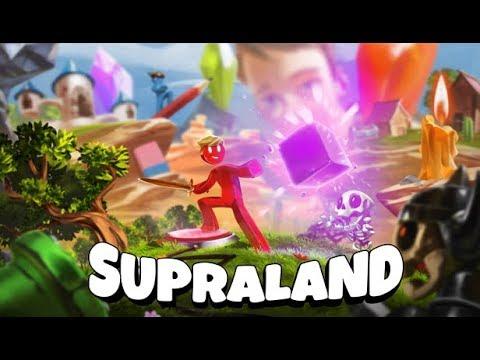 It even has a demo available on Steam, which I gave a run. After crashing first during the intro scene, a second attempt seemed to be fine. Performance isn't great though, I did have to turn down a number of settings quite a bit to get it smooth but it's playable.

Seems like a really sweet game though, apart from the performance the demo gameplay was actually quite impressive so I'm not really surprised so many love it. Great colourful style to it too, with everything being set in a literal sandbox in a child's garden. Quite a lot of secrets to find too, even in the demo. You can pick up a copy on Humble Store and Steam.

You can also find the Kickstarter campaign for the sequel here which will also have Linux support. Currently the funding campaign has managed to get over 50% funding with 28 days left to go.

Quoting: TheSHEEEPThis is the first time I have even heard Metroidvania applied to a puzzle/exploration FPS.

View PC info
Downloading the demo and if it works well I'll buy it. Thanks for the info.
0 Likes

View PC info
Finished the demo today and since it's a fiver off right now, I went ahead and bought it. Now I just have to find time to actually play it, since Sin's addiction to 7 Days to Die has me adding nearly literally hundreds of hours to that game instead!

Supraland demo wasn't perfect - it's one of those game, I suspect where you can't "miss" a section and continue playing. The demo requires you to unlock all five hidden golden barrels to actually progress and it's honestly not amazingly straight forward in such a complex 3D environment. But it's beautiful to look at, slick movement and nice interaction. Looking forward to playing the full game.
0 Likes
x_wing 4 Jul, 2019

View PC info
Just bought the game. It's really well done and quite fun! My only problem is that I have big fps slowdown in the starting city and in other places too. It definitely requires a little of optimization for Mesa...

View PC info
Fun game. Performance is not really good. I get 35-40 fps regardless of graphics settings. I tried it with "-vulkan", but nothing changed. No idea if the Vulkan renderer can't be used or whether it just didn't make a difference.
0 Likes

Trying the demo right now, it uses Unreal Engine 4 + Vulkan.
I'm using a gpu under the specs (gtx 750 2Gb) and i can achieve about 30fps at 1920x1080 with "resolution quality" to minimum.
Plus, i've to set texture quality to minimum or it crashes every now and then.
The fun thing is that performances under proton are about the same, but i can keep the texture quality to maximum and it does not crash.
-edit-
it seems to perform BETTER with proton.

View PC info
I'm about five or six hours in and already losing a bit of motivation to play. There are no real markers on what to do next, so I end up generally just walking around the same areas a whole lot wondering what I'm missing. On the plus side, when you do find something you either previously overlooked, or didn't have the ability to change, it's quite rewarding. On the down side, I can't really be bothered with that trial and error repetition, so either I'm ditching this shortly, or I'm resorting to youtube playthroughs to shortcut the tedium.

I'm playing at 1080p on a GTX1080 and the performance is flawless, on max, no crashes suffered so far. I might have to turn off lens flare though, since it's constantly flaring in your face when you pick up a supraball with your upgraded gun. Pretty distracting.

Lovely game though, beautiful visuals and a really fun premise. It just needs some kind of quest/hint system to keep the player interested. I'll keep my eye on Supraland 2 for sure.
0 Likes
«2/2
While you're here, please consider supporting GamingOnLinux on: