The Valve-funded shader compiler 'ACO' is being queued up for inclusion in Mesa directly (updated: merged)

Updated: It has been merged into Mesa, just before I clicked publish on this—what timing! From what they said, it should be available in Mesa 19.3 and it can be enabled with the "RADV_PERFTEST=aco" environment variable (source).

Back in early July, Valve announced their work on a new AMD GPU shader compiler for Mesa named ACO and now they're trying to get it pulled into Mesa directly.

Their main aims with ACO were to get the "best-possible code generation for game shaders, and fastest-possible compilation speed" and to replace the currently used shader compiler from the massive LLVM project. It has certainly seemed promising, improving both shader compile time resulting in less stuttering and so helping to improve overall FPS and smoothness in Linux games when played on supported AMD GPUs. 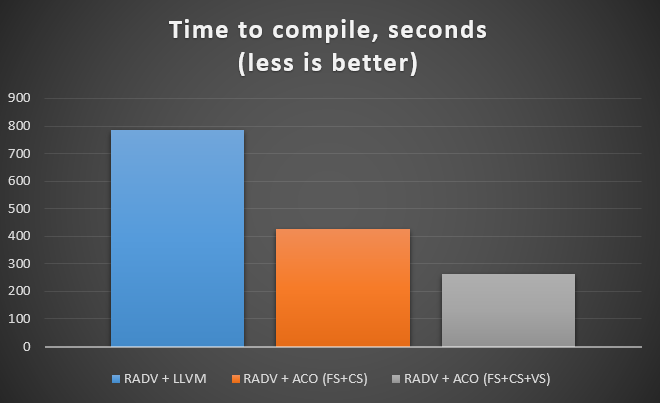 Just this week, a merge request was opened to get ACO into Mesa officially and so far the reception does seem quite positive. It's not in yet though and it may need more work doing and adjustments before it's actually accepted. It's likely far too late for Mesa 19.2 which is due to release very soon, so hopefully Mesa 19.3 currently due towards the end of the year will see it.

You can see Valve's original announcement with more details about ACO here, although with the new Steam display view for news and events it doesn't load for me so use the Wayback Machine if you have the same issue.

To see a little more discussion about it, there's people testing it in our forum.

Article taken from GamingOnLinux.com.
Tags: AMD, Drivers, Mesa, Open Source
32 Likes, Who?
We do often include affiliate links to earn us some pennies. We are currently affiliated with GOG, Humble Store and Paradox Interactive. See more here.
About the author - Liam Dawe

View PC info
I really hope ACO will land soon in Mesa-git, it worked perfectly well so far :-)
1 Likes, Who?

View PC info
Yay! ACO really improves by a lot the frame time on Serious Sam for me (or to be more precise, frame times becomes constant). Good to see that we will have this improvement on 19.3
1 Likes, Who?

Quoting: sr_ls_boyIs it turned on by default?

Quoting: phoronixThe ACO back-end with RADV isn't enabled by default at this time but requires setting the RADV_PERFTEST=aco environment variable to activate. Having this mainline is great news for encouraging more testing and feedback. We'll be running some fresh ACO benchmarks shortly for providing the latest Radeon Vulkan performance numbers for Linux gaming.
4 Comments

I suppose that FS is fsync, but I don't know about the others
0 Likes

Quoting: sr_ls_boyIs it turned on by default?

Quoting: phoronixThe ACO back-end with RADV isn't enabled by default at this time but requires setting the RADV_PERFTEST=aco environment variable to activate. Having this mainline is great news for encouraging more testing and feedback. We'll be running some fresh ACO benchmarks shortly for providing the latest Radeon Vulkan performance numbers for Linux gaming.
4 Comments


Yeah, I just saw that at phoronix. I also read that there are some pull requests for nir that are needed which make the master branch worthwhile to compile. Until they get pulled, stick with the aco git repository.
0 Likes