Pine certainly looks good, a proper open-world action adventure with a story depicting humans who never reached the top of the food chain. It just released with Linux support today.

Note: Both the publisher and GOG sent a copy for us.

Developed by Twirlbound with a publishing hand from Kongregate, the story and setting certainly sound great. Looks fantastic too, gives off a little bit of a Zelda Breath of the Wild vibe from the trailer and pictures. You can see the launch trailer for yourself below: 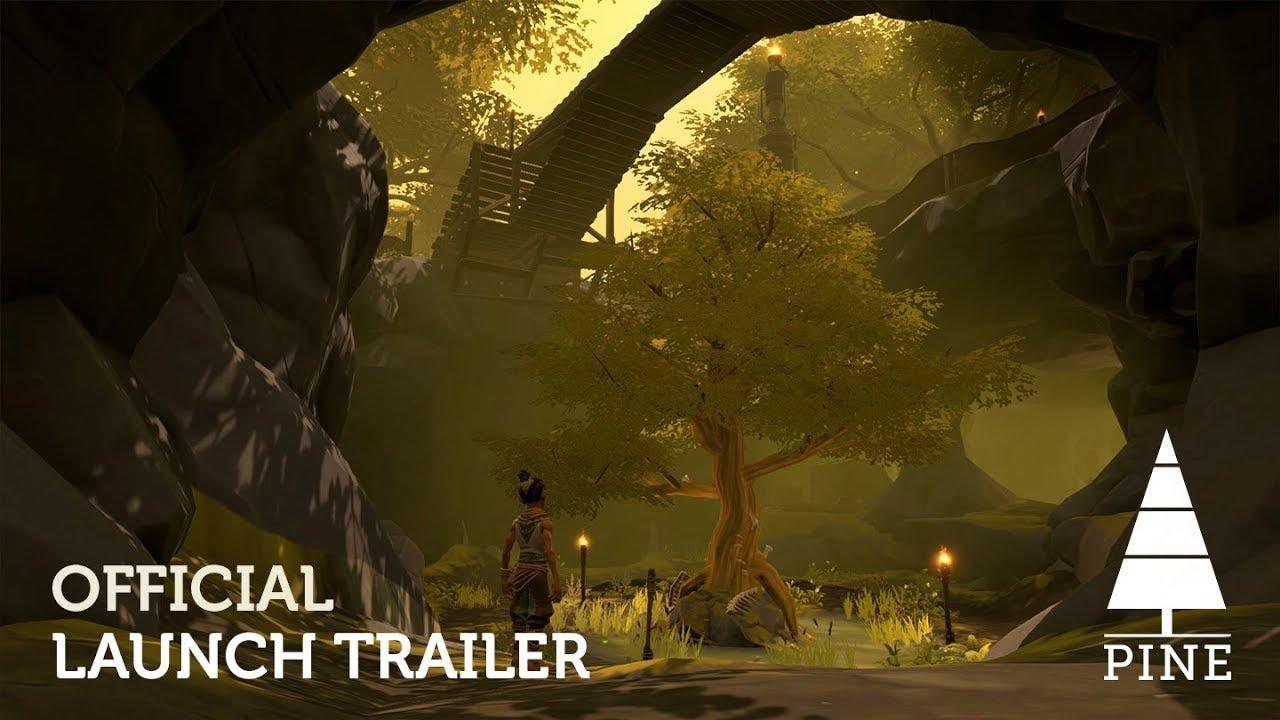 As a quick bit of history, Pine was funded thanks to the help of around 4,091 Kickstarter backers pledging €121,480 back in 2017. Linux was included as a release platform and here we are.

Something to note since it will be asked, there's a set story to follow and so there's no character creation possible in Pine. The story follows the young protagonist, Hue, as they attempt to find out more about the world they're in as the elders seem to live in fear of the outside world.

I've not had it long and sadly I've already noticed one major issue on NVIDIA. If you adjust VSync, your character model instantly vanishes so you're just clothes floating around. Quite a nuisance. I've reported it to them, which they've seen and it can be worked around by quitting and reloading. There's a few other times I've seen models not appear for various things too. Hopefully this will be amongst the first lot of fixes.

It's a Unity game using OpenGL, with no Vulkan support. I've tried forcing it to Vulkan but that caused the player log file to fill up with errors and eat entirely through my HDD space so that wasn't possible it seems.

Pine has everything in it that seems like an open-world adventure I could happily play for weeks, with the ability to explore and mess around in the environment. I've already had a few laughs with it, especially the weird and wonderful animals you come across. Disturbing a nest of "Puffles" was quite amusing, weird bird-like creatures that make a lot of noise and then they all make a mad dash to get away from you. Free eggs though—winner! 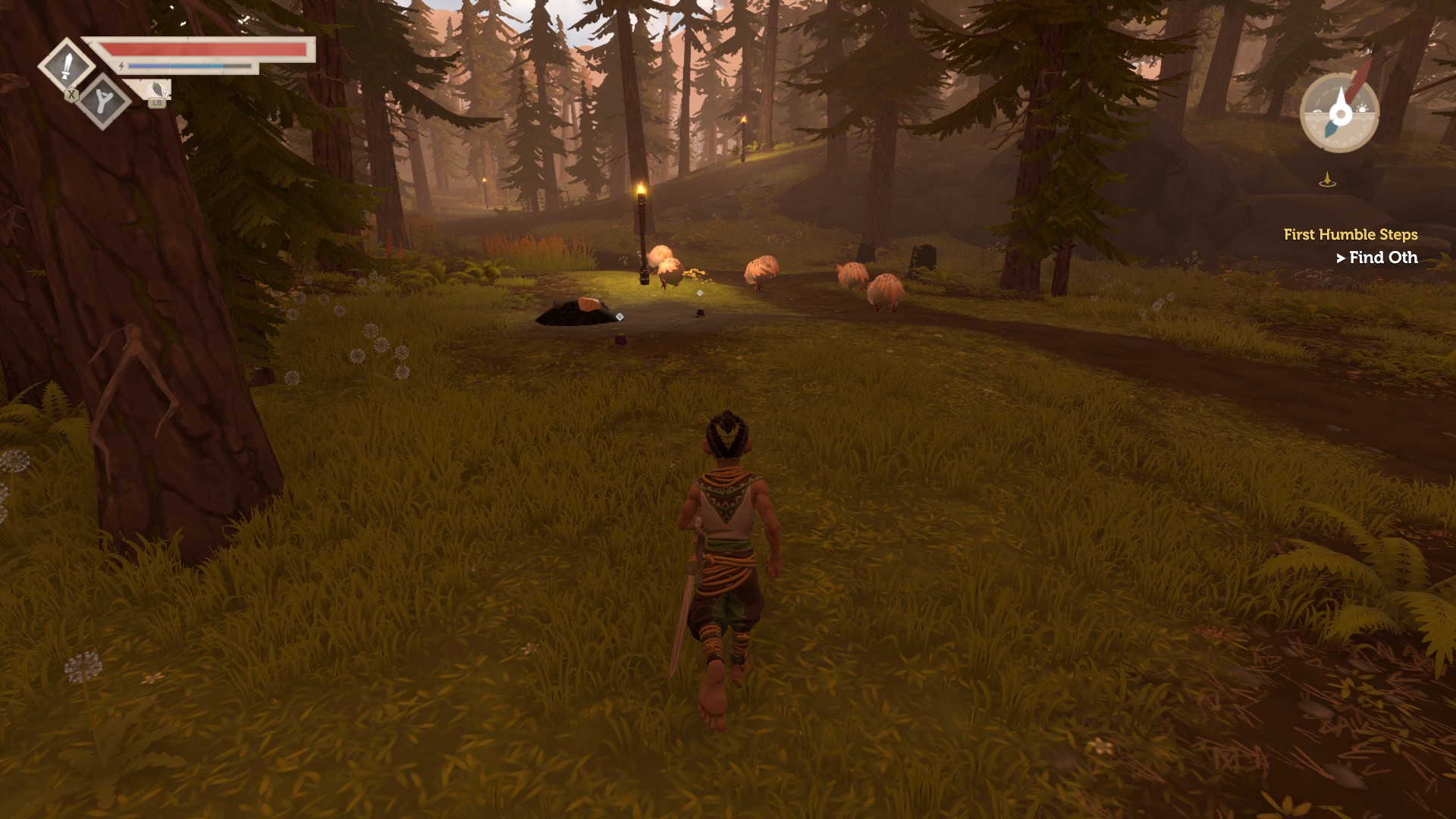 Pine has a number of different animal factions, all trying to control the island. If you help one and become allied, another might start attacking you on sight. To increase your standing with a faction, you need to give them a bunch of junk you find while exploring in a Donation Box near their village.

Some time later I was exploring, trying to find one of those Donation Boxes to increase my standing with a village. I found one and just as I was about to hand over the goods, what I can only describe as a huge and colourful (and surprisingly well equipped) Turkey decided it really didn't like me. It was mad—real damn mad.

It was well and truly kicking my butt, until a Fox-like person came along and started throwing explosives everywhere! What the heck is going on? I haven't a clue but it's brilliant. 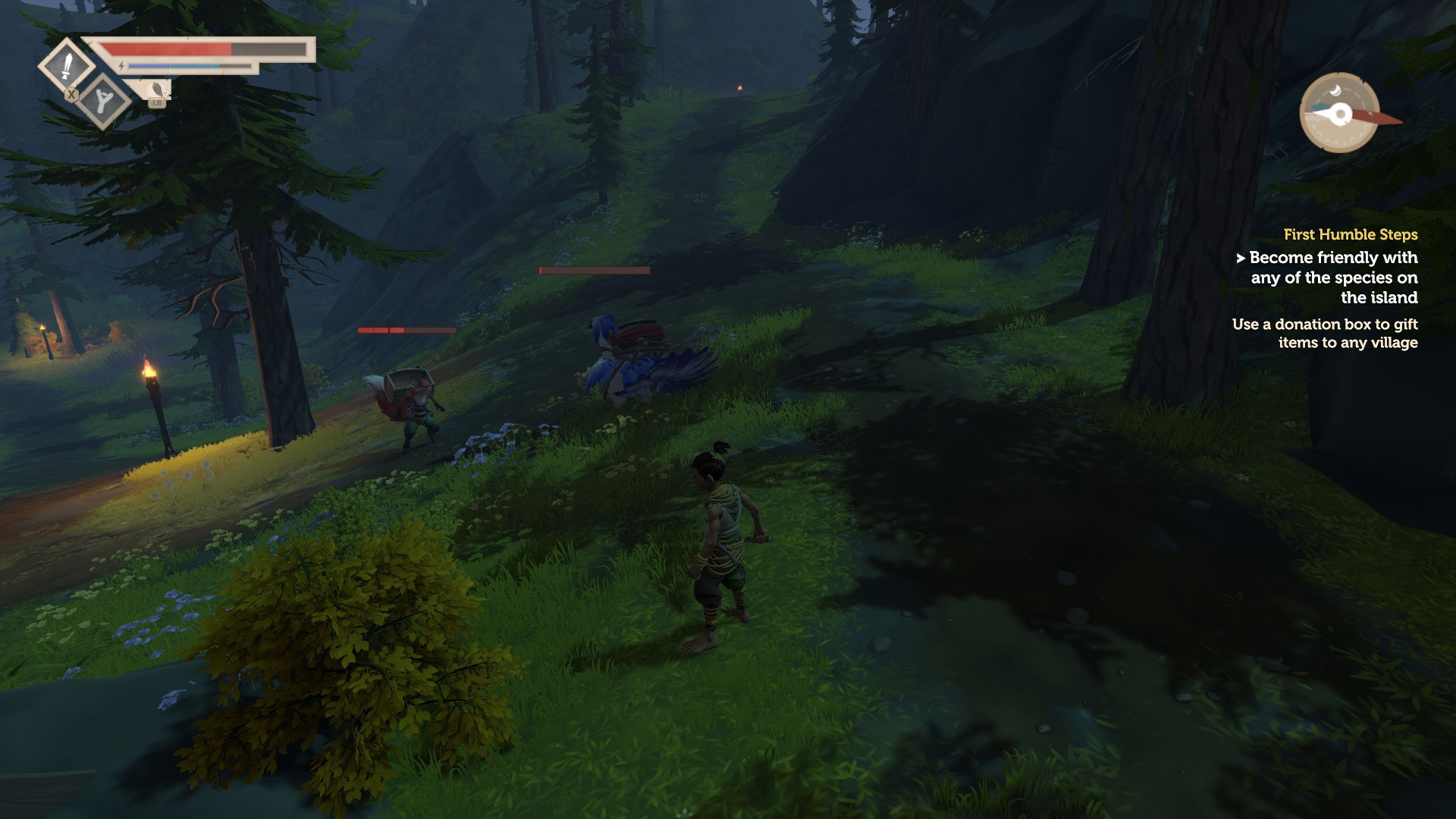 The thing is, the Fox creature wasn't trying to help me. They just happened to be rival factions. After the colourful Turkey was defeated, the cunning Fox turned their attention to me and…a few bombs later I was toast.

From what I later learned, the Donation Box was right next to a village whose entire people were hostile to me. Okay then, so I sneak back to it later and donate a ton of rocks and wood and now they're my friends. Sorted. Well, that's stretching it a bit, we're almost friends. I just need to donate a few more rocks and random stuff I find on my travels. 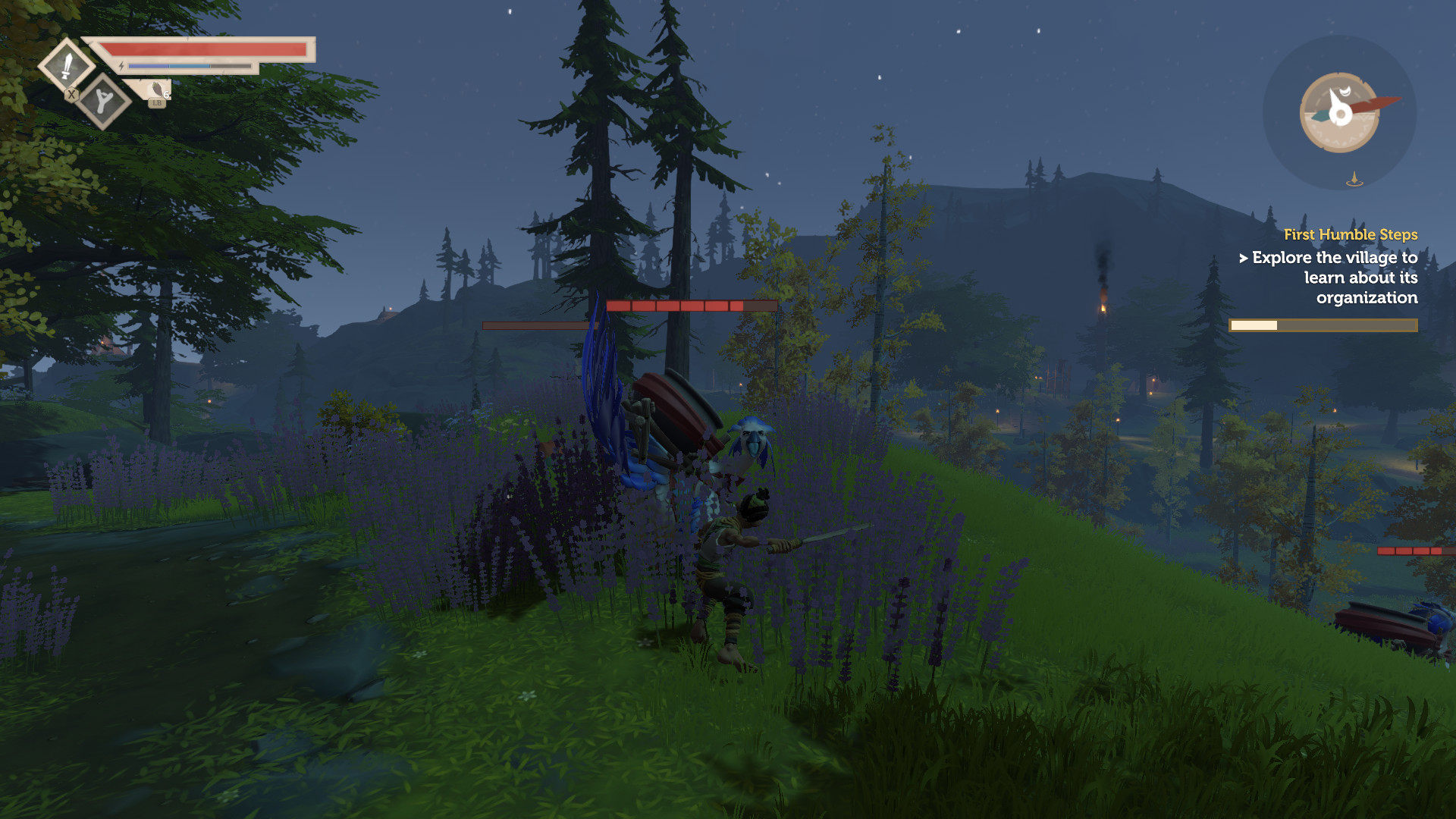 I keep coming across these Turkey-like creatures, which I've now learned are actually called Gobbledew. They're manic fighters, they can launch themselves right up into the air at you and all. In a group, they're quite a nuisance to deal with. Seeing my new Fox friends (which are actually called the Fexel) growl at them when they come near their territory is quite awesome—and alarming with the volume up.

The Fexel eventually take me in, after I follow their gatherers for a while and pinch whatever goodies the Gobbledew end up dropping when slain by the Fexel, which I then donate back to the Fexel. Whose the cunning one now then? Me! Now they all salute me when I walk past, they even gave me a shield! Now I'm on my way to find someone else who might be familiar with Human equipment to help me gear up. Things are looking up!

Lots of amusing encounters are possible and the world seems quite big, plenty to see and do. Incredibly promising. You know a game is definitely good when you don't want to stop playing.

Rough edges but seems a huge amount of fun. You can pick up Pine from GOG and Steam.

Note: The article originally mentioned really low performance, but that is a result of issues with my CPU Governor. Forcing it to Performance makes it a lot better. It's likely the game is doing something we quoted Croteam tallking about in a previous GOL article.

View PC info
I haven't heared from this game before, but this looks like it would be a perfect game from me. I just bought it on GoG and will do my own performance testing. Going to report back, when I have results.
4 Likes, Who?

View PC info
I expect I'd enjoy playing this too... but only when the game is running smoothly and relatively bug-free. It seems all too common nowadays for devs to release games which aren't running well. On the Steam page, it doesn't say it is Early Access, so can't really forgive them.
1 Likes, Who?

This game looks awesome, Seems to be a must buy for singleplayer lovers, I will buy it, thanks guys for the Linux support.
1 Likes, Who?

Quoting: julkipI haven't heared from this game before, but this looks like it would be a perfect game from me. I just bought it on GoG and will do my own performance testing. Going to report back, when I have results.

Preliminary result of about 30 minutes of testing:
I played on 1920x1080 windowed mode (as it seems the game does not support ultra wide resolutions like 2560x1080) with graphics set to "Fantastic". I had constant framerates in the 40ies with very rarely drops to 38 or 39. When entering a new area it dropped once to 25, but only for a split second, probably it was still loading.
My specs are: Ryzen 5 3600 (not overclocked), GTX 1070 Ti, 16GB Ram

I will continue testing tomorrow, unfortunately I don't have the time to do proper testing today.
5 Likes, Who?

View PC info
did you upgrade your hardware Liam? I though that you had a 980Ti.
2 Likes, Who?

excellent missed that news.:D good for nvidia, even if they don't provide open source drivers I still hold a high esteem for them, some graphics stuff it's first implemented on nvidia drivers, so they are bringing innovation to linux nevertheless.

View PC info
Well for me the game is working well. Playing at "Fantastic" (highest) setting at 4k around 40-50 fps with occasional dips to low 30s fps. However, I am also using Vega 64 and padoka stable drivers
For what I have played, I think the game is neat and actually lives up to my hopes. Only thing I miss are real voices. That would probably add a bit more depth to the characters.
2 Likes, Who?
x_wing 10 Oct, 2019

View PC info
As I said, this really looks like a mix between Fable and Overlord. Now, where did I put my credit card...
0 Likes
1/4»
While you're here, please consider supporting GamingOnLinux on: