Chooseco are getting indie games using 'choose your own adventure' taken down on itch.io

The creator of indie store itch.io has issued a warning to game developers, as Chooseco appear to be trying to take down anything using the 'choose your own adventure' phrase.

Not surprising it's happening though, Chooseco went after Netflix for using the same phrase with Black Mirror: Bandersnatch. Speaking on Twitter, itch.io founder Leaf Corcoran stated:

Warning to any devs using the phrase "choose your own adventure" to describe their games, Chooseco is issuing takedown notices to @itchio for trademark infringement. Example game page they went after: 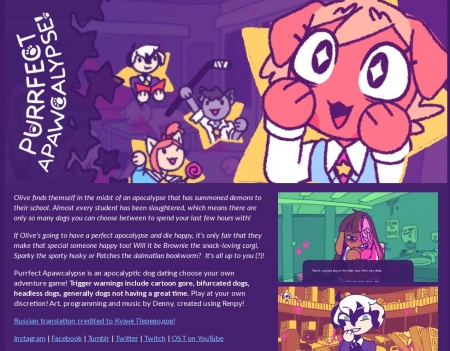 In a follow up Twitter post, Corcoran mentioned the person issuing the notices on behalf of Chooseco has been "difficult" and it comes across like they're essentially trolling. This is what happens though, often too, there's legal trolls everywhere. Some companies are set up just to go around sending off trademark notices on junk. I find it completely ridiculous that any company can trademark something like 'choose your own adventure', it just seems crazy to even allow that.

Regardless of how insane it is that such a thing can happen, game developers do need to come together and come up with something else they can use instead. Perhaps someone can then protect it themselves on the basis that anyone can use it, much in the spirit of open source eh? Can you think of a fun phrase that would fit? Let's see what you've got in the comments.

About the author - Liam Dawe
I am the owner of GamingOnLinux. After discovering Linux back in the days of Mandrake in 2003, I constantly came back to check on the progress of Linux until Ubuntu appeared on the scene and it helped me to really love it. You can reach me easily by emailing GamingOnLinux directly.
See more from me
Some you may have missed, popular articles from the last month:
The comments on this article are closed.
49 comments
Page: 1/5»
vildravn 9 Dec, 2019

QuoteCan you think of a fun phrase that would fit?

"Select Your Own Endangerment"? :D

View PC info
It's notable that they're picking on smaller creators without the financial resources to resist a lawsuit over the issue.

I do note that they're also going after Netflix, which suggests the company might have gotten involved with a lawyer (or firm) that's using this as an opportunity to grab some settlement cash.
0 Likes

View PC info
It's a pity that "Varytale" was already used by an interactive Fiction engine. That would have been a great genre term.
1 Likes, Who?

View PC info
I am no IP lawyer, but this seems so blatantly unlawful that it's not even funny. Trademarks on common words usually apply only to very, very specific uses. Such as Apple can claim the right to that trademark for electronic devices, but they can't prevent a grocer from calling that edible round thing an "apple".

I agree with the first comment that IP law needs an overhaul and urgently so.
10 Likes, Who?

Quoting: KimyrielleI agree with the first comment that IP law needs an overhaul and urgently so.

There needs to be much harsher repercussions for abusing the law like that. As far as I know there's not any, so you can just throw accusations and takedown notices around and see what sticks.
4 Likes, Who?

apocalyptech 9 Dec, 2019
View PC info
Honestly, trademark disputes are at least somewhat understandable -- I believe that trademarks in particular are the thing in US law that you can literally lose the ability to claim it as your own if you allow other folks to use it. They often seem quite frivolous from outside the perspective of the company defending their trademark, but it's sort of just One Of Those Things. Kleenex was famously annoyed at the genericization of its brand name, etc.

Fortunately at least in these cases the answer is pretty trivial: just don't use the exact phrase "Choose Your Own Adventure." Ryan North settled on "Chooseable Path Adventures" for his excellent Shakespearean "To Be Or Not To Be" and "Romeo and/or Juliet" books (both of which I'd highly recommend, fwiw).

Edit: Oh, and also in this case, even if the trademark holders aren't coming out with any new official CYOA books (that I'm aware of), it is still an active brand; not too long ago they started making board game versions of some of the original titles. Unfortunately they're pretty bad, but they're not totally dormant. https://boardgamegeek.com/boardgame/251420/choose-your-own-adventure-house-danger

View PC info
This sounds like the time the Fine Bros wanted to trademark/copyright the term "react".
I hope this blows up in their face.
6 Likes, Who?

Quoting: KimyrielleI am no IP lawyer, but this seems so blatantly unlawful that it's not even funny. Trademarks on common words usually apply only to very, very specific uses. Such as Apple can claim the right to that trademark for electronic devices, but they can't prevent a grocer from calling that edible round thing an "apple".

I agree with the first comment that IP law needs an overhaul and urgently so.

These small devs should all band together.
Maybe a crodwfund for defense team.
Alone they can't do anything but together they might be a force to recon with.

View PC info
I'm going to trademark "choose your own".


Last edited by Tchey on 9 December 2019 at 9:18 pm UTC
4 Likes, Who?
Frostysky 9 Dec, 2019
But at least from the example it seems it is not generally the phrase but specifically talking of a "choose your own adventure game" that is problematic. From the text one could understand that this is an official "choose your own adventure game" and with this I understand that this is a trademark issue.
0 Likes
1/5»
While you're here, please consider supporting GamingOnLinux on: