When you get hooked on a game like Mindustry, it's hard to put it down and play anything else so please send help. A free and open source game that looks like a retro Factorio, with a heavy emphasis on tower defense that keeps expanding with updates and I can't stop playing it.

Mindustry is all about building a smooth supply chain. Right from the raw resources, spreading across the map with conveyor belts feeding into turrets holding back waves of enemies. It's so ridiculously easy to get into and play for a little bit at a time, it's become quite the regular in my own personal list. So much so, that I've now gone and personally purchased it on Steam after spending far too many hours with it on itch. 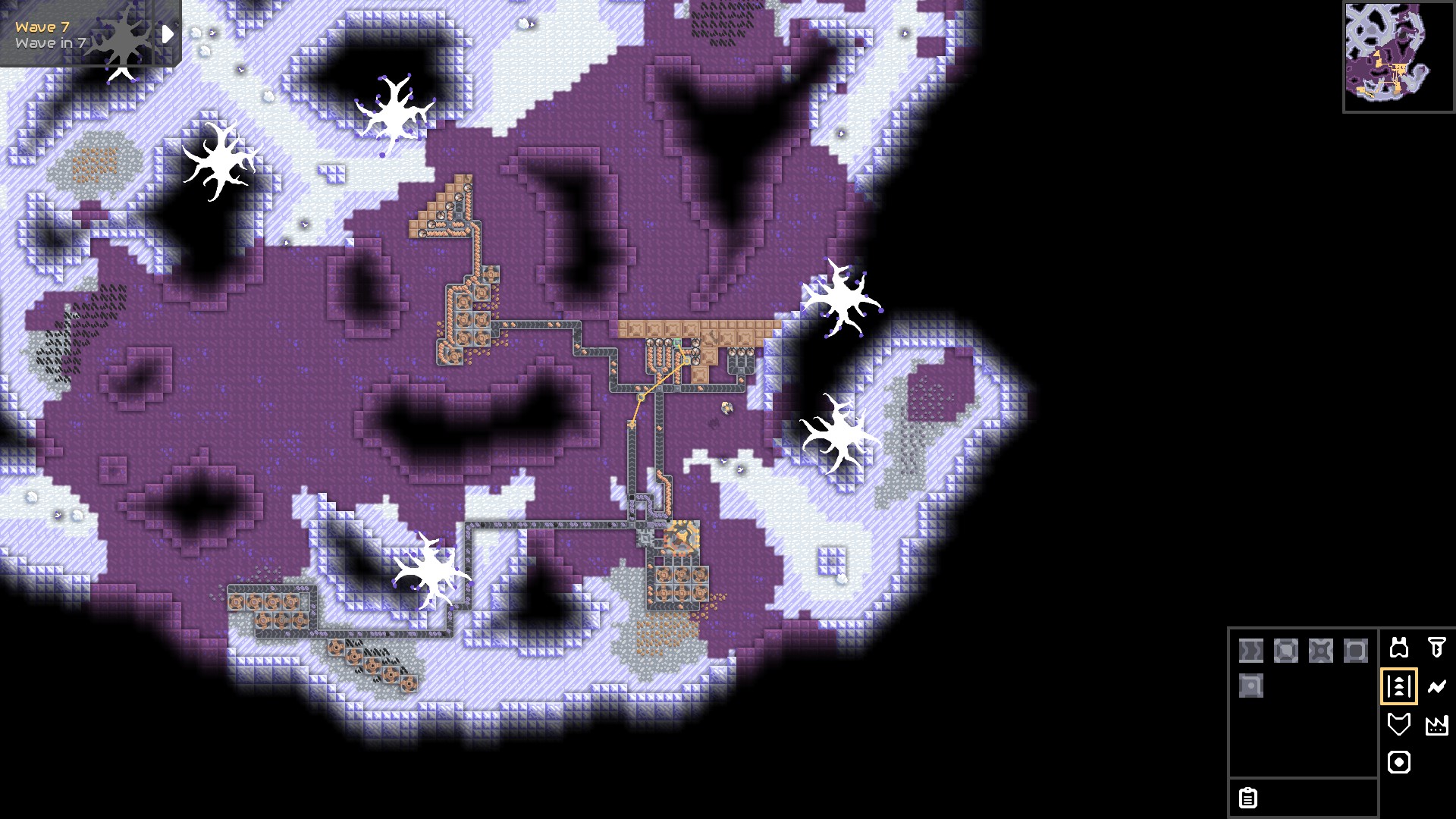 The campaign pacing is excellent too, you're not really forced into doing anything. Maps can be repeated, you can finish each map at various enemy waves taking resources with you to then unlock new tech or play on a different map. Once you've unlocked some of the tech tree, the game really does open up a lot more too, there's some seriously fun contraptions you can build. It just feels like it all fits together so nicely.

Being able to play against others in PvP is also part of what I've been enjoying about Mindustry. Being able to build up a base, then send out a little army. It's such a glorious mix of gameplay types and with modding support expanding recently, it's only going to get bigger and better. It's advancing quite rapidly in other ways too not just modding with an experimental lighting system being added, a Schematics system to save things you've built that work well done to quickly build, easy block rotation, hotkeys for selecting blocks and more.

Earlier today, I checked out what was going on inside the Mindustry community, instantly getting blown away by what's possible. There's a new map being tested, which is huge and split into little hexagon areas each player spawns in for some large-scale PvP. 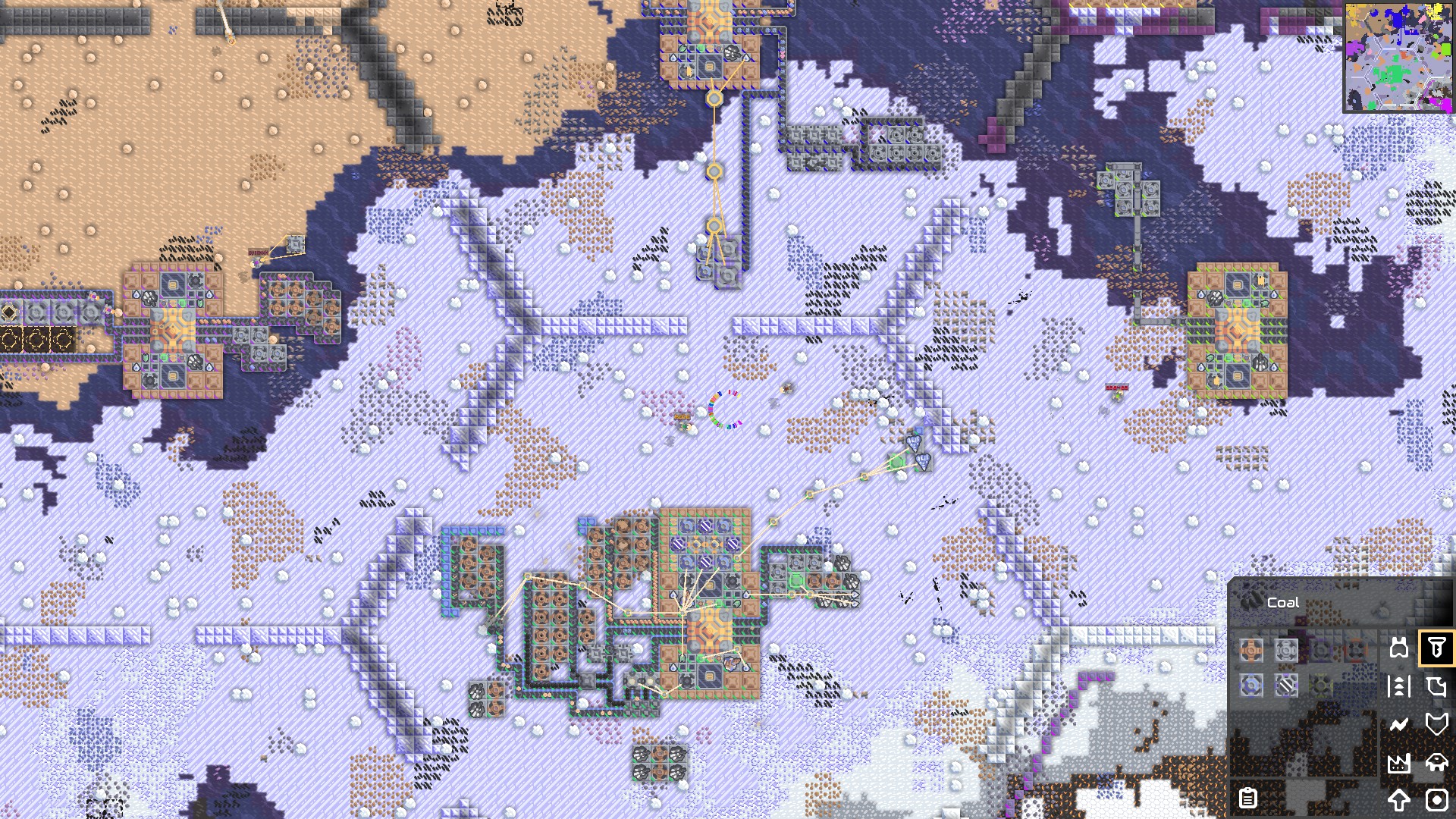 What's possible with it is quite amazing. If you're after a game to sink some hours into, do a little base building and create some crazy factory then like me you will probably think Mindustry is just awesome. A fantastic example of how great an open source game can be.

You can find it free on itch.io (you can donate too) or buy on Steam (Workshop support, Steam integration) and there's also the source code on GitHub under the GPL.

View PC info
You can also download it for android from google play or F-Droid.
3 Likes, Who?
Ketil 8 Jan, 2020
View PC info
I like this game, but I struggle a lot with the late-game stuff. I'm just not efficient/patient enough to build up sufficiently large supplies of items like plastanium, phase fabric and surge alloy before I have to evacuate.
0 Likes

View PC info
I agree the game is amazing, playing it via itchio since i don't know... the prototype i guess ?
0 Likes

View PC info
Yeah... some games make you feel like you were ripped off, paid too much money.

This game will make you feel like you ripped off the developer.
I honestly don't understand why they sell it so low, but it's their choice.
2 Likes, Who?
no_information_here 9 Jan, 2020

Quoting: TheSHEEEPYeah... some games make you feel like you were ripped off, paid too much money.

This game will make you feel like you ripped off the developer.
I honestly don't understand why they sell it so low, but it's their choice.

Haha. I haven't had much time to play since I picked it up in the Xmas sale, but you are right. Remarkable for the price.
0 Likes
Blue22 9 Jan, 2020
View PC info
another easy way to get it installed is via snap:

I guess Flathub will add it too at some point, specifically interesting because of the planned "pay what you want" option

Quoting: TheSHEEEPI honestly don't understand why they sell it so low, but it's their choice.

It's a free and open source game. The Steam version is probably only there so you can support the dev. Although I suspect many buyers on Steam don't even know that it is actually free.
0 Likes

TheBard 15 Jan, 2020
View PC info
I spend a crazy amount of time on this game :) I LOVE it! It regroups a fair number of genres i like: base building, tower defense, factory management and rogue like. If you like these genres to, give it a try, you may like it.
0 Likes

gomera 26 Jan, 2020
View PC info
Nice! I'll give it a try, it is looks somehow similar to Creeper World 3.
0 Likes
While you're here, please consider supporting GamingOnLinux on: