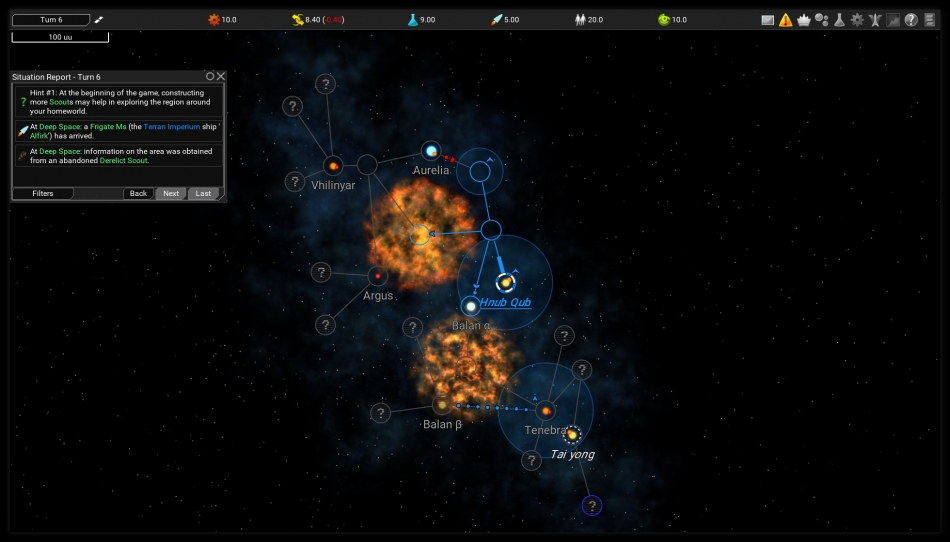 View PC info
I put way too many hours into this game. Their agenda is to remove micro-management from game as much as possible. Now there are 4X-fans who like micromanagement, others find it tiring. If you are in the latter camp...
0 Likes
Purple Library Guy 10 Feb, 2020
It may be the first big update in some time, but ever since I installed the game, Mint's updates often include FreeOrion updates; it seems like there's been plenty of point- or bug-fix releases.
It's really quite different from MOO. In MOO, except for the occasional wormhole you're doing FTL travel in open space; in FreeOrion they're connected by warp lines of some sort. Races are completely different. The specifics of what buildings you make on planets are almost completely different. The planets have somewhat MOO-like climate characteristics, but the way you get to colonize hostile planets is quite different; basically, planet types that are bad (for your race) hand you max population numbers that are actually negative, while various biological technologies give you max population boosts; get enough boosts to put a planet into the positive and you can colonize it (technically, you can anyway, your people just start dying; get the right tech in time and they'll start growing again). Weapon technologies are significantly different, and ship hulls are not only different but considerably more interesting--there are several broad "families" of ship hulls, like organic ones, ones that go down a path of hugeness enabled by gravitic technologies, a group of hull types made from asteroids which require an asteroid belt to make, and a family of ship hulls made of Pure Energy (muahaha!). They all have somewhat different advantages and shortcomings. In general the tech tree bears very little resemblance to the MOO tech tree, and there are quite a few interesting technologies.
Another difference is that in FreeOrion, art is almost nonexistent. It's a very bare-bones look, although you can customize what you see in an interesting, rather nerdy way, moving around and changing the size of sub-windows with different reports and stuff. Some of those sub-windows are well set-up and useful; some look like the results spit out by doing some kind of shell command, and it takes some play and thinking before you can start to figure out what all the lines of text mean. Luckily those are kind of less important ones and you can often just leave them minimized.
It can be frustrating. There have been a number of times when I tried to do something it seemed like I ought to be able to do, found I couldn't, and couldn't tell whether it was because of a glitch or because the game just wasn't telling me about some feature or limitation. Sometimes I eventually figured it out, sometimes I didn't.
Overall I'd say it's quite interesting and worth a look, but . . . let's just say you can tell it's an open source game, eh?

Quoting: Purple Library GuyI'm not sure what I think about "removing micromanagement". Usually with this kind of game I'd rather micromanagement was made easier than taken away.

Played it yesterday. Agreeing on all points :)

It's still a fun experience so far.
0 Likes
While you're here, please consider supporting GamingOnLinux on: