Amoeba Battle: Microscopic RTS Action, a title that's somewhat a mouthful and it was a surprise when it released on Steam earlier this month coming out of nowhere. Note: The developer, Grab Games, sent a key.

Unlike many other RTS titles, you don't build up a base in Amoeba Battle and you're not controlling humans either. Instead, you take charge of and direct around microscopic life competing for dominance. It's weirdly cute and ridiculously inviting, with a quite beautiful watercolour style to everything that captured my heart instantly as a big RTS fan. 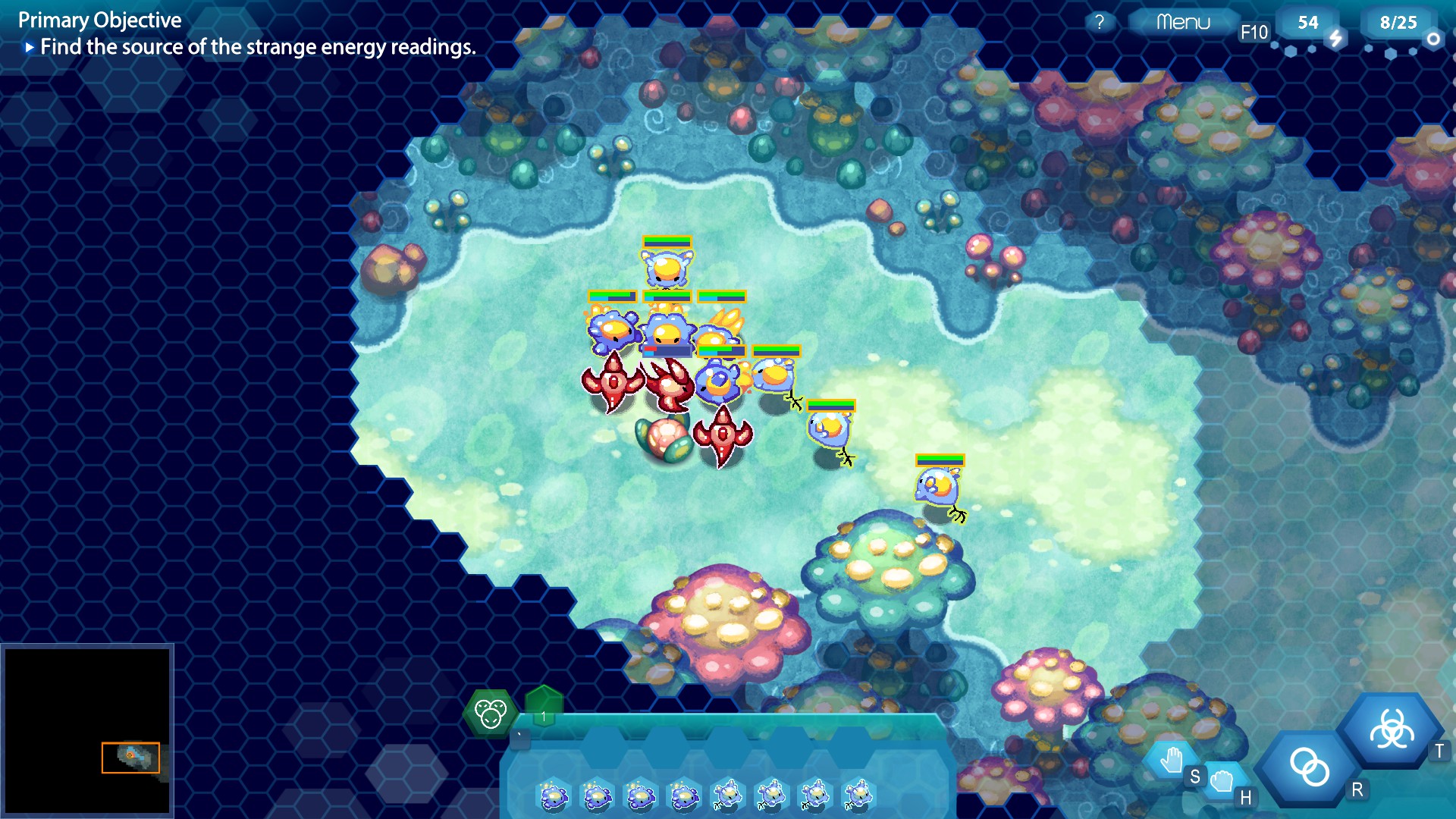 How you use your little friends is unusual too, as they have quite the appetite and they each eat different things! You need algae for herbivores, the meat of other life for your carnivores and there's some that will happily munch on anything in their way.

That's not all that's strange, since you don't build up a base you actually use the food stored in each of them to replicate and split into two. When they get full, they an adorable little happy face which is somewhat amusing and then they're ready to get splitting. 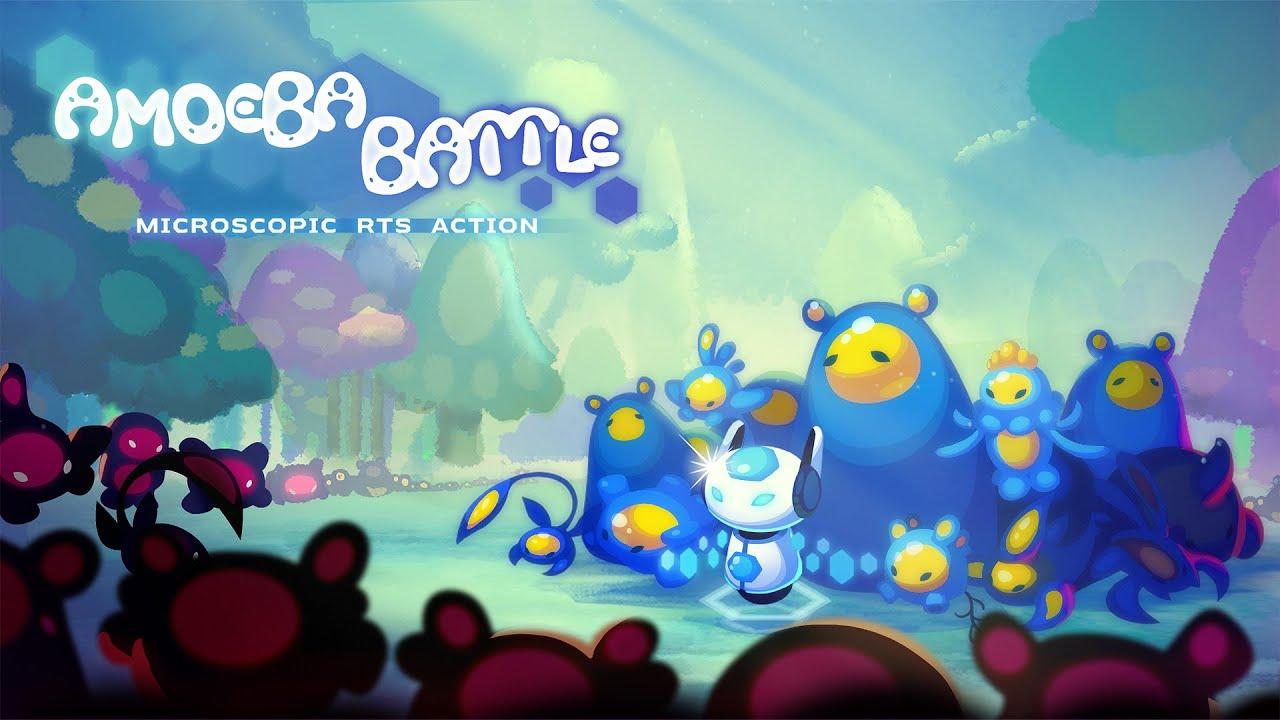 Other clever mechanics are included too, like herbivores being able to regenerate while in algae which can make them a challenge to take down if you're not prepared. You also mutate your microscopic beings into other forms of life but it all works quite nicely together.

With a full single-player campaign which is very sweet, you follow the directions of an AI as some sort of scientist trying to gather DNA samples from all the creatures. Really though, as nice as it (and it is good), is I couldn't help feel like it was only just preparing me for the real challenge to come. You see, Amoeba Battle has a Skirmish mode too. Not unusual for an RTS but the skirmish battles are the huge surprise, I really wasn't ready for it! It works like a real-time strategy mixed with a Battle Royale (a bit like The Red Death for Civilization VI), as you all fight for the top spot while eating the amoeba of opposing teams. This Amoeba Royale can have up to 18 players in a free-for-all, duos and trios.

As the game goes on, a volcano erupts spewing out meteor storms crushing units and dishing-out research tokens to collect to make your army of amoebas even stronger. On top of that, the map gets smaller over time as the "Miasma" spreads, creating quite the panic. 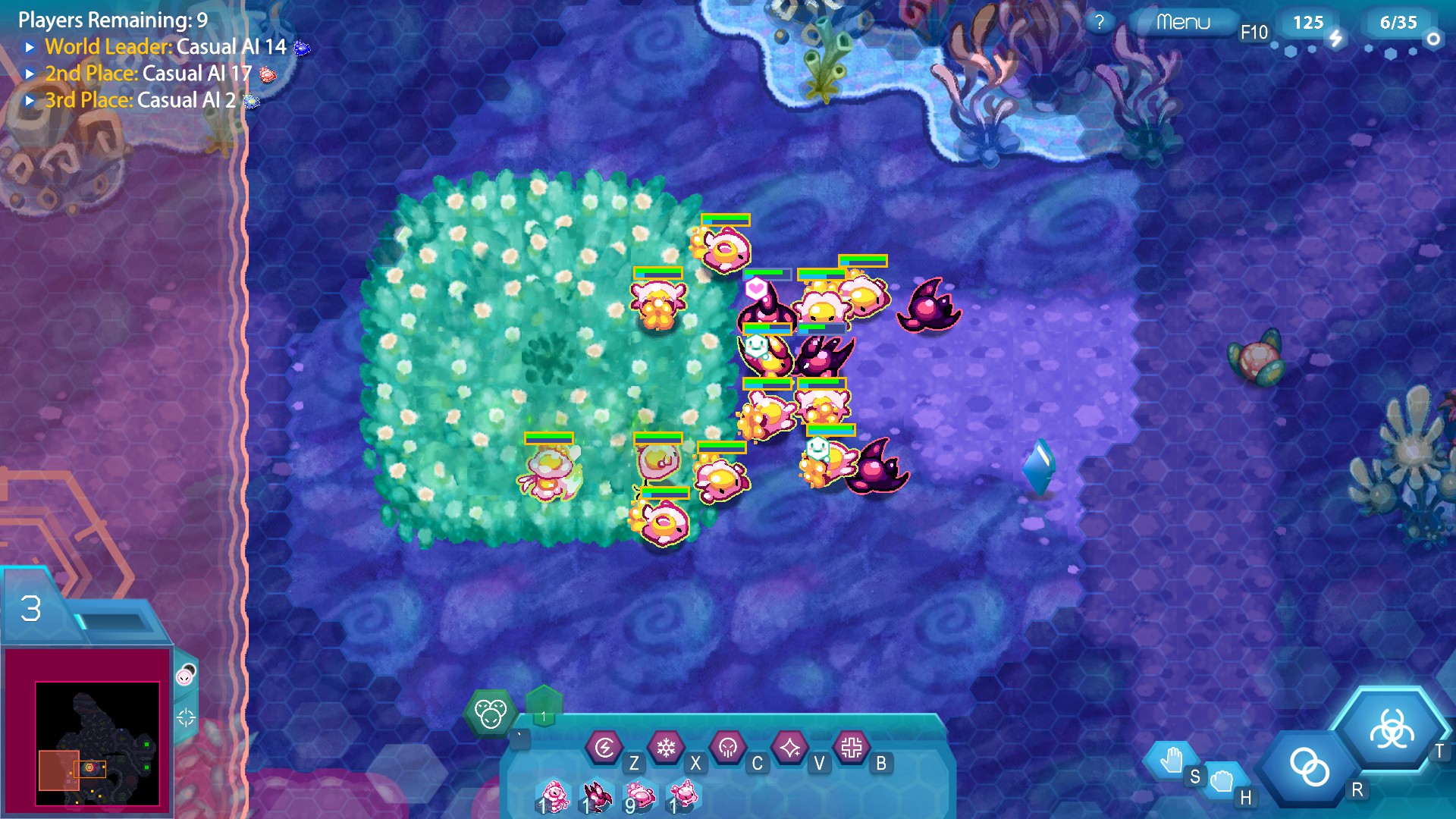 What it ends up as can only be described as pure chaos—I love it. Although, I can see it being an issue if you're not a fan of the APM (actions per minutes) style gameplay that comes from the choatic screenplay in the very-late game which may need some balancing adjustments.

Overall though I do have to say, I've become quite a big fan of it! All things considered, it's quite the innovative RTS. There's a lot of familiarity to it, while also being unique enough that it stands out because of all the fun mechanics stitched together. The overall aesthetics are fantastic, tons of small touches in the colouring and design and I do love the little hexes for the fog of war.

The single-player campaign, plus massive AI skirmish battles and online/LAN support all with the rather original gameplay make Amoeba Battle: Microscopic RTS Action enjoyable and certainly worth a look.

You can buy Amoeba Battle on Steam.

I am the owner of GamingOnLinux. After discovering Linux back in the days of Mandrake in 2003, I constantly came back to check on the progress of Linux until Ubuntu appeared on the scene and it helped me to really love it. You can reach me easily by emailing GamingOnLinux directly.
See more from me
Some you may have missed, popular articles from the last month:
6 comments
Purple Library Guy 11 Mar
I notice the trailer says cross-platform battle royale. So, none of this nonsense like in certain ported games, where they weren't able to overcome bad design decisions and so online play was divided by platform.
2 Likes, Who?

View PC info
I'm definitely gonna give this a try.
Not sure how much lasting appeal it'll have, but it does look cute and different. Without looking like a mobile game.
0 Likes

I'm also going to check this out, visual style reminds me of that carbot skin for starcraft remastered. the gameplay chaos reminds me a bit of tooth and tail, which I loved.
0 Likes

View PC info
Whoa, this game is brutal.
Having played through all the classics on the hard difficulties, I'd say I'm pretty good at RTS games.

But the third (or is it fourth?) mission already seems completely impossible of you do not play 100% perfectly. On normal!!!! This is still supposed to be the tutorial... I have only three unit types lol.

You are under a constant pressure from 2/3, later all 3 sides, have to defend multiple choke points against enemies that are just MUCH more numerous than you are.
I did it after 3-4 tries, but wow, I had to put units into perfect positions, put them on hold so they wouldn't break the line and I could finish the mission without any losses... this is not a game for people new to the genre, despite the first impression.

And the unit cap is ridiculously low. It should at least be twice as high.
25 units really is pretty much nothing in RTS games where you have to spread out so much.

Quoting: TheSHEEEPWhoa, this game is brutal.
Having played through all the classics on the hard difficulties, I'd say I'm pretty good at RTS games.

That's interesting, I saw similar comments in the steam reviews. Maybe I'll wait and see if they balance things out.
0 Likes

View PC info
Yeah, the campaign balance is off.
All missions following that one (so far) have been much easier.


Last edited by TheSHEEEP on 13 March 2020 at 11:22 am UTC
0 Likes
While you're here, please consider supporting GamingOnLinux on: