System76 do a lot of things, they've steadily grown to a point where they make their own desktops and now they're expanding further into making more hardware.

Now they're going to have a go at making a keyboard. Not the fanciest of tech, sure, however it's something we use constantly when at a PC and it's obviously essential. It also hasn't really changed much over the years, which System76 think they can do better.

Since they're a Linux hardware vendor, and they also make their own Linux distribution with Pop!_OS, it will of course all fit together nicely.

In their blog post, they did a little interview with CEO Carl Richell, who mentioned that they did research and found that "spacebars typically, for example, are way too long" and that "you use your pinkie because useful keys are out at the extremities of the keyboard—so we wanted to change that". 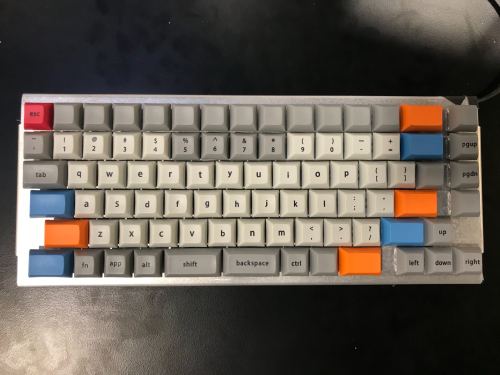 Being configurable is a bit point of what they're doing too. The hardware, firmware and configuration software will be open source too. The keys can be swapped around, making it easy to change how you use it. And yes, it appears to be a proper Mechanical keyboard too.

It'd not going to be a massively wild design though, beginners should still be able to plug it in and get going like anyone else but "you’re going to have less strain on your hands, because instead of using your pinkies, you’ll use your thumbs for common keystrokes and key combinations" and other common keys will be more accessible.

Speaking on Twitter in reply to a quick tip we did about this early yesterday System76 Engineer, Jeremy Soller, confirmed it will work with QMK (Quantum Mechanical Keyboard Firmware) something echoed by another System76 Engineer Michael Aaron Murphy who said "Everything is open source. You may even flash the firmware to remap the behaviors of each key.".

When will it be available? They're aiming for late Summer and before then hopefully they will show off the proper final design for us to ogle over.

Article taken from GamingOnLinux.com.
Tags: Hardware, Upcoming
12 Likes, Who?
We do often include affiliate links to earn us some pennies. We are currently affiliated with GOG, Humble Store and Paradox Interactive. See more here.
About the author - Liam Dawe

I am the owner of GamingOnLinux. After discovering Linux back in the days of Mandrake in 2003, I constantly came back to check on the progress of Linux until Ubuntu appeared on the scene and it helped me to really love it. You can reach me easily by emailing GamingOnLinux directly.
See more from me
Some you may have missed, popular articles from the last month:
48 comments
Page: «5/5

Quoting: Purple Library GuyIt's a pity because QWERTY really isn't a very good layout, although I'm not sure I believe the story that it was deliberately designed to slow typists down to avoid keys sticking.

I can believe it was designed to avoid keys sticking, but the slowing typists down part was probably just an unwanted side effect of rearranging the keys to space out common key sequences (in the english language).
2 Likes, Who?

View PC info
I've been touch typing QWERTY for a long time now. A couple of years ago I wanted to try out Dvorak, so I found some exercises, and tried to practice -- the keyword here, though, is 'try'; because the effort almost gave me vertigo, it made me seriously dizzy.

I'm still curious, though I'm really not willing to put in the effort to overcome that awful feeling of disorientation.

View PC info
As long as we're showing off cool and unusual keyboard designs, have the Keyboard.io: Quoting: SirLootALotSo why wouldn't I just buy a Das Keyboard instead. Looks much more customizable, more standard and it comes with a german keyboardlayout. Its Software is also free.

That's pretty cool. Haven't heard of that one before.

Quoting: AciDIt's weird nobody mentioned the awesome Typematrix keyboard, and its Dvorak layout:
[…]


Also haven't heard of that one before, and also pretty cool! All these nifty keyboard options make me slightly sad that my Corsair Vengeance K70 I bought back in 2014 is showing no signs of needing replacement anytime soon. :P

Quoting: Philadelphus[...All these nifty keyboard options make me slightly sad that my Corsair Vengeance K70 I bought back in 2014 is showing no signs of needing replacement anytime soon. :P[...]

That's the one I was on before I switched to my ErgoDox EZ - just saying ;)
0 Likes

Quoting: wvstolzingI also wonder what range the price is going to be at.

Considering System76 are basically the equivalent of Apple in the Linux world, I wouldn't hold your breath for this to be reasonably priced... It's going to be ridiculously over-priced, just like their computers.


Quoting: NanobangOf course the Steam Controller is still the best controller ever made ... :P

Quoting: NanobangI think the Steam Controller is like Linux itself: clearly superior, but, because it requires the user tinker and think now and then, puts it out of realm of interest for the mass of humanity living comfortably in the middle of the Bell curve.

That's a good way to put it, and I can't see any reason to disagree. It's an almost insurmountable challenge to get consumers to think outside the box. Apple is very good at it; Valve, not so much (for example, the iPod wasn't the first portable digital audio player, nor was it the best -- a good argument could be made that it was actually among the worst in terms of storage capacity and sound quality -- but Apple's brilliant marketing turned it into a household name almost overnight; same with the iPhone).

Quoting: NanobangI'm aware that the reason for the offset keys of the traditional keyboard have to do with the natural angle of fingers above the keys, so I'm curious about how it would feel to type with the grid of the Typematrix unit.

About the offset keys, this has nothing to do with the 'natural angle of the fingers' but more about having to let the typewriter little hammers stand next to each other, instead of on top of each other. This offset hasn't been fixed for the last 100 or so years.

The grid feeling is pretty neat ; since you do not have to twist your fingers to type letters that are not on the home row.

Quoting: Purple Library GuyIt seems to me that one of the major reasons for alternative layouts like Dvorak keyboards has greatly diminished since they were invented. That is, raw typing speed is not an issue nearly as often as it once was IMO. Used to be you had lots of situations where speed was the big thing. Secretaries took dictation, people typed stuff that had started out written on paper longhand. Sometimes people even typed multiple copies of the same thing! Later there was lots of "data entry", which is to say typing things into computers because the information didn't start on computers.
Nowadays much of that is gone. People compose their own emails, they don't dictate them to secretaries. Files are infinitely copyable. Increasingly, data originates in computers (eg forms are filled out online in the first place, not transcribed from paper), or is put there by scanning barcodes or those square barcode-like things. Typing mostly does not need to happen faster than composition, and QWERTY's fine for that, so there's little impetus for change.

It's a pity because QWERTY really isn't a very good layout, although I'm not sure I believe the story that it was deliberately designed to slow typists down to avoid keys sticking.

Well, you said it better than myself ; before you could rely on specialized worker to type, now *everybody* needs to type, and shop online, to argue in forums (;)), etc.
Using a superior layout is clearly not just for speed (according to studies, not my opinion), but more about comfort. Having 70% of the most used letter in english on the home row is pretty neat for my fingers and wrists (https://en.wikipedia.org/wiki/Dvorak_keyboard_layout). Having letters in bigrams (tr, ch, etc.) close to each other is another great feature.
Also big plus for me, as a native French speaker, is that english Dvorak works pretty well with French too (I can even very easily type accentuated capitals like À, È or Ç), as well for coding, with very easy access to [], {} and numbers (where Azerty forces you to use shift to access).


Well, one way to see it, is that using a dvorak layout to type English is like using Linux instead of Microsoft ; it's superior in every way to the globally used system, but :
- people will look at you weird, and
- and if you were to try it, you'd obviously need an adaptation period when you *will* feel uneasy.

Anyway, to each his own !

If you are curious about how and why the Dvorak layout was created, check out that (pretty old now) fanzine : https://www.dvzine.org/zine/index.html
2 Likes, Who?

View PC info
Yeah, I'll echo what AciD is saying.
I was getting terrible finger aches from the finger stretches I had to do when using Qwerty which was alleviated by switching to Dvorak and fixed completely by switching to an ortholinear layout. My wrist pains were alleviated by switching to the ErgoDox and whipping up a ghetto-stand (extending the existing tent kit with popsicle sticks to get steeper angles :P)
I will recommend switching Z and L on Dvorak though - moving the pinky down is just easer for me than up and I use L a lot more than Z.
0 Likes
« 1«5/5
While you're here, please consider supporting GamingOnLinux on: