We have no idea if Valve will ever do a proper second revision of the Steam Controller, we've seen hints before and now we have more info on what it could have been.

This new information has appeared in the form of a patent application, one originally made in 2018 but only as of last month did the application seem to go public. It seems to take some ideas from another Valve patent from 2011 which never made it into a released product.

What it shows isn't a huge departure from what we already have, the design is mostly the same but there's a few key differences. The biggest being that you can swap around the left stick for a proper D-pad with an RFID sensor to detect which is attached. You can see one of the example mock-up pictures below: 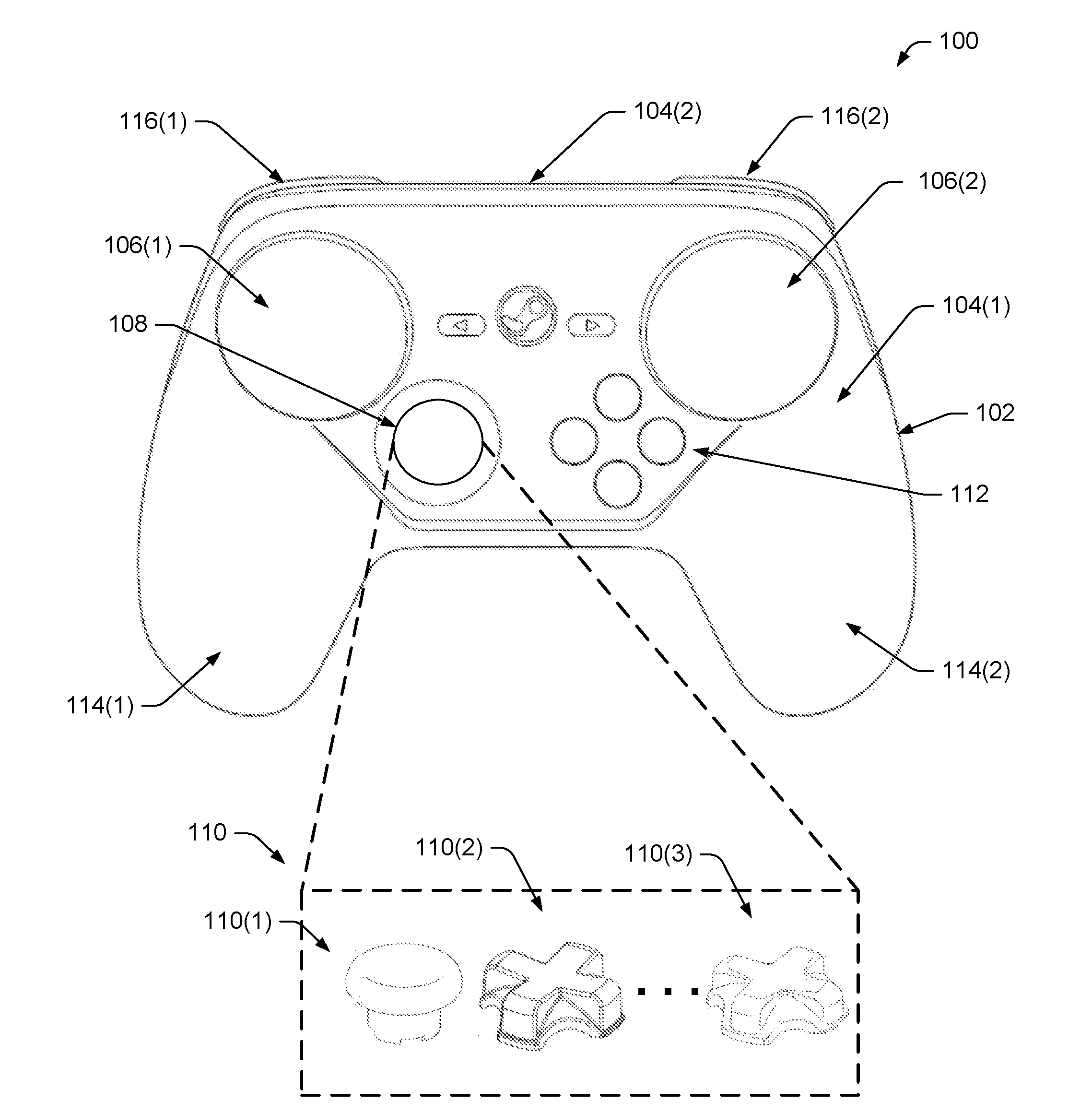 Another difference is that it showed the ability to switch between different backplates: one with four buttons in total (two each side) and another like the current Steam Controller with one each side. It would have some sort of receiver on the back, much like the D-pad, to know which is connected. Personally, I found the backplate buttons to be one of the best parts of it, super handy to save your hand some stress for intense gaming sessions to just tap what you're already holding.

On top of that, it also seems to indicate it would have some form of on-device storage. The way it's described, somewhat sounds like it would store some of the configuration information in the controller itself. That certainly would be handy for carrying it around and perhaps for places were you don't have any net to still load them up for your favourites.

Valve, make it so. The Steam Controller was a wonderful piece of hardware, allowing many people to enjoy many more games with comfort. It's a piece of tech that needs a second revision.

We do often include affiliate links to earn us some pennies. We are currently affiliated with GOG and Humble Store. See more here.
About the author - Liam Dawe
I am the owner of GamingOnLinux. After discovering Linux back in the days of Mandrake in 2003, I constantly came back to check on the progress of Linux until Ubuntu appeared on the scene and it helped me to really love it. You can reach me easily by emailing GamingOnLinux directly.
See more from me
Some you may have missed, popular articles from the last month:
The comments on this article are closed.
31 comments
Page: 1/4»
mphuZ 11 Apr, 2020

These bumpers.. Why can't they install normal soft bumpers like Sony?
0 Likes

View PC info
I hope they double the back buttons, so we can get the same number of buttons as the new xbox elite controller for a third of the price ahah.
0 Likes

Hey, do you think there's a connection between this and the fact that it's pretty much Easter time?

*takes off clothes and runs down the street shouting 'Hallelujah! Steam Controller Jesus is coming!*
2 Likes, Who?

View PC info
If You Build it, They Will Come!
0 Likes

View PC info
I'm wondering if rfid tags might not be over-engineering for this kind of problem. Mechanically, an analogue stick and d-pad work differently (at least if you want them to feel different) and that mechanical wear & tear will have to be taken into account if they'll be switched around frequently. I understand rfid tags mean no contacts for querying...but is that really such an issue? I mean take your pick of a simple uart interface - serial, spi, i2c, all easy ways for readout, and much more reliable than rfid, and I daresay cheaper on a BOM.

Then any firmware engineer worth his salt will need to take into account read failures, and possibly insert defaults, or configuration to override the queried returns. Then what's the point of this extra hardware if you can configure it anyway? Although lack of software to need to configure it is appealing I admit, reliance on component id readout from something that can suffer some physical wear & tear does increase the surface area of possible failure points.

Don't get me wrong, interesting idea, and I would imagine (or at least I would hope!) that all such points have been thoroughly discussed and would be given a decent test hammering through prototypes if the design goes ahead. There's just a very long way from a paper design to physical device, and a lot may change along the way.

tldr; don't be surprised if such a design never materialises, but at least it's a sign of trying to think of something different.
0 Likes
kuhpunkt 11 Apr, 2020

I just love the Steam Controller, I bought 3 for myself. It's confortable, nice to play FPS games, highly configurable, the batteries lasts way longer than I expected.
6 Likes, Who?

Mountain Man 11 Apr, 2020
View PC info
In my opinion, the Steam Controller is the best gamepad ever made. It's disappointing that it never caught on, but I suppose that's a consequence of Valve's almost nonexistent marketing.
11 Likes, Who?

I've always gotten that question during the extremely rare appearances the survey has made on my system in the past.
0 Likes
1/4»
While you're here, please consider supporting GamingOnLinux on: