Cross-platform game engine Defold has announced that the source code is now available under a reasonably generous license, along with the formation of a Defold Foundation.

It's interesting as the owner was King, a popular mobile game developer (Candy Crush amongst others) who also acquired the Defold engine from others before them. It was already free to use and cross-platform but the next step was announced today.

"We’re hugely impressed by the Defold team, and look forward to seeing many great gaming experiences come to life. We’ve seen millions of players already playing the King games run on the Defold engine and we’re excited to see the community come together even more, with the support of the Defold Foundation." says Tjodolf Sommestad, Chief Development Officer, King.

Note: their license is derived from the official Apache 2.0 License. The Apache 2.0 License itself is approved by the Open Source Initiative (OSI), although I'm unsure on how any of their tweaks to it would affect the official use of the "Open Source" term. Likely not properly correct to actually call it open source but it's close. This is likely another "Source Available" type of situation. It's still fantastic news regardless. 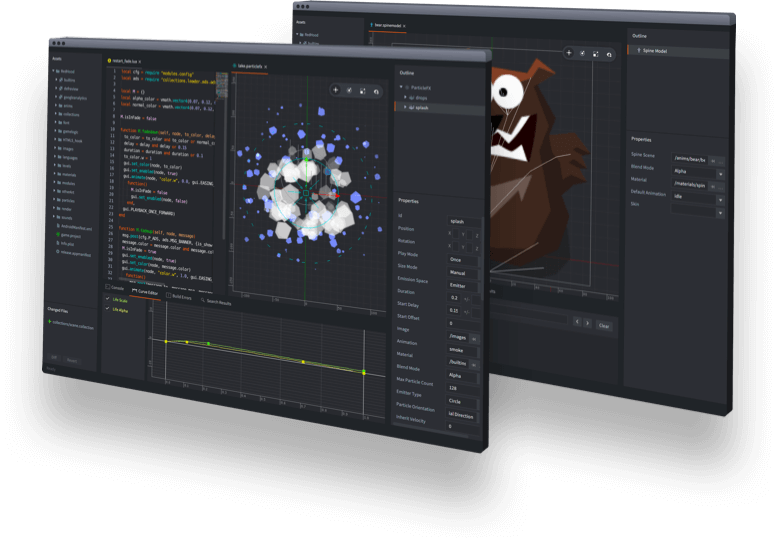 This new Defold development team and Foundation sounds good. Developers from King will be working on Defold full-time, with the Foundation board headed by Sara Cederberg from King and other industry people like Elin Eriksson (Women in Tech Sweden).

Excellent news really. I'm looking forward to seeing Defold continue to be a good free and open game engine. Not only does it support cross-platform building to Linux but the editor is also available on Linux to make games with. It's also getting Vulkan API support this year!

Find out more about Defold on the official site and now GitHub too.

As an example of a recent (and awesome) game made with Defold, check out Fates of Ort.

Update: the Defold team have since quite quickly acted on feedback, and no longer say it's open source but that it's "Free & Open" instead.

Quoting: The Defold LicenseYou are free to commercialise any software created using Defold

Quoting: The Defold LicenseYou can not commercialise original or modified (derivative) versions of the Defold editor and/or engine

Therefore I don't think it qualifies according to OSI definition due to rule 3:

The license must allow modifications and derived works, and must allow them to be distributed under the same terms as the license of the original software.


So in other words: it's not Free (as in freedom), it's free (as in beer), with source released license which is pretty permissive and close to Open Source definition.

I bet it will be a good choice for many developers despite of this.
1 Likes, Who?

Quoting: Patolaa) You do not sell or otherwise commercialise the Work or Derivative Works as a
Game Engine Product; and

Any software that has the dreaded "NC" (Non-Commercial) restriction is by definition not open source. I must add that people that try to prevent the huge benefit of using the code for profit do not understand the very idea of open source. Commercial gain is the most important incentive for people to work on the code and the best leverage for it to be popular.

Is it allowed to make a fork of GCC and sell the resulting product?
0 Likes

View PC info
They do not adhere to rule 3, because forks can be distributed only under non-commercial license (unlike Defold itself).
0 Likes

Quoting: EhvisIs it allowed to make a fork of GCC and sell the resulting product?

Yes. That's why it is called Free software.
0 Likes

Quoting: dreamer_They do not adhere to rule 3, because forks can be distributed only under non-commercial license (unlike Defold itself).

Rule 3 doesn't state it has to allow commercial works though, it's simply about allowing the same license, which it does. Don't mix that up with other OSI rules about commercial works, which would go under point number 1 i believe.

Quoting: Liam DaweActually, they're pretty clear on it:

But not to rule 6, which says "No Discrimination Against Fields of Endeavor" -- in this case, commercialising the derived software. It is NOT open source.

No, rule 6 is about what it's used for, not the redistribution of it.

It seems like the only rule they don't fit in with is rule 1, because as a whole they don't allow you to sell it on. In this case, they're like 99% close to the OSI definition bar that 1 thing. Close enough?

QuoteNo, rule 6 is about what it's used for, not the redistribution of it.

It's iffy, if I make a painting program in it, I may not be able to sell it, since it can be used for game development.

QuoteNo, rule 6 is about what it's used for, not the redistribution of it.

It's iffy, if I make a painting program in it, I may not be able to sell it, since it can be used for game development.

Their license is clear on things made with it, they're yours.

QuoteYou are free to commercialise any software created using Defold

I don't think you can be any clearer on that, for software made using it.

Edit: Digging further, they do need to clarify the actual license text, you're right on that as Remi from Godot pointed out on Twitter.

I've updated the article title and text to be a bit clearer.


Last edited by Liam Dawe on 19 May 2020 at 11:21 am UTC
0 Likes
emptyfortress 19 May, 2020
I'm surprised nobody's mentioned yet that you have to use their cloud-based compiler if you want to write native extensions (including for stuff like accessing a phone's camera).

They give you the sources to run that locally, but who wants to add "manage a docker instance" to their game development workflow?
1 Likes, Who?

Liam Dawe 19 May, 2020
View PC info
Update: the Defold team have since quite quickly acted on feedback, and no longer say it's open source but that it's "Free & Open" instead.
2 Likes, Who?
1/2»
While you're here, please consider supporting GamingOnLinux on: