What are you clicking on this weekend? Come have a chat in the comments

Another week down, most of us are still in lockdown with the Coronavirus and there's plenty of time to play games. Playing games can be a truly wonderful way to get your mind off everything too!

Personally, I've been very surprised by Iratus: Lord of the Dead which recently left Early Access with added Linux support. The mix of party-building from body parts, with reverse dungeon crawling as you're trying to escape is quite a wonderful. It's quickly become my new go-to game for a few rounds, replacing Slay the Spire. Apart from that, jumping into a few rounds in PUBG on Stadia (article info - see video) has proven quite fun.

A reminder of some other bits of news recently:

Over to you in the comments!

What have you been playing recently on Linux and what do you think about it? What's tickling your fancy this weekend?

Article taken from GamingOnLinux.com.
Tags: Community, Misc
6 Likes, Who?
We do often include affiliate links to earn us some pennies. We are currently affiliated with GOG, Humble Store and Paradox Interactive. See more here.
About the author - Liam Dawe

I am the owner of GamingOnLinux. After discovering Linux back in the days of Mandrake in 2003, I constantly came back to check on the progress of Linux until Ubuntu appeared on the scene and it helped me to really love it. You can reach me easily by emailing GamingOnLinux directly.
See more from me
Some you may have missed, popular articles from the last month:
76 comments
Page: «3/8»

PatolaAh, another Spiders fan! Have you played Technomancer to compare?

Does it run well on Proton? I have not finished Expeditions: Conquistador yet... How do the two compare?

Sorry to say, I haven't played "Technomancer" yet. I've had it on my wishlist forever but first I was hoping for a native linux port and then proton arrived and I almost forgot about it in the flood of new gaming possibilities. I will get around to it in time without question.

As for "Expeditions: Vikng",It runs great with proton but you must switch to "Proton-5.6-GE-2" for everything to work properly. The combat and camping mechanics are very similar. but there is also much more focus on resource gathering and building up strength & prosperity in your danish "home base".

kaiman 2 May
View PC info
For the majority I've been playing The Bard's Tale IV. It's plenty fun, but plagued by technical issues.

Yesterday I went back to F1 2017 for another race, but still a couple more to go before I can complete the season.

progaltrocker 2 May
View PC info
I might be playing some Factorio, maybe something else Sunday night. Busy working on an online brony con for the majority of the weekend.
0 Likes

View PC info
I've been playing a lot of Northgard, especially since I got many of my friends to buy it and we are playing some light multiplayer.

I have also been playing lots of Civilization. Since 6 is a bit slow, I first went back to 5, but now I'm playing 4. All great games in their own right. For shorter sessions some Molek-Syntez (latest Zachtronics game), some Runefall 2 (nice match-3 game), and some Slay the Spire.
1 Likes, Who?

View PC info
I tried out Pathway, a few months ago, and wasn't that bothered and decided to not keep going with it. More recently I reinstalled it again (Small game, quick to download). This time round I've been getting more into it. It reminds me a little of the travel between nodes in FTL and the short encounters. The combat sections remind me of the old turn-based, isometric X-COM game. That is packaged up in an Indiana Jones-style world, with a story to match. In another way it is similar to FTL, you start off with a group of 3 different characters, and each character plays differently so you adapt your play-throughs accordingly. You unlock extra characters as you achieve objectives in the game. (Similar to playing/unlocking different ships in FTL.)

Picking it up in a sale, and it has been sitting in my wishlist for about a year: Walden, A Game. In this, you have a mild-survival, exploration, and appreciate-nature/art/philosophy experience. The game is flawed in execution, but it is still charming and engaging and I've been enjoying it. You're living the life of writer Henry David Thoreau when he decided to "go back to nature" in his life, and try to live self-sufficiently off the land near Walden Pond.

View PC info
Been playing Pathfinder: Kingmaker for a couple of weeks, and intensely for the last few days. Lots of fun. Great game.

Was difficult during character creation, I spent about 3 hours, because there are sooooo many options and things to consider. Opted for an Aasimar Sorcerer in the end, largely because I played a sorcerer in Baldur's Gate 2, so at least I knew a bit how it worked.

It is released natively for Linux, and works flawlessly. Sadly the sequel hasn't been promised for Linux yet, but I hope they will do that. It's Unity after all, so stuff like that is relatively easy. Like one developer said, it's basically just toggling a button when building the game. That's simplified ofc, but I do hope they release Wrath of the Righteous on Linux too. Will be an instant buy if they do.
2 Likes, Who?

View PC info
Warhammer Online - Return Of Reckoning Private server. Been playing it for the Last 6 months or so. Love the epic PvP Battles in this game. Keep Sieges, Fortresses and City Sieges. Currently also leveling an alt, Sorceress Class, which is really powerful, but dies quick if caught :) 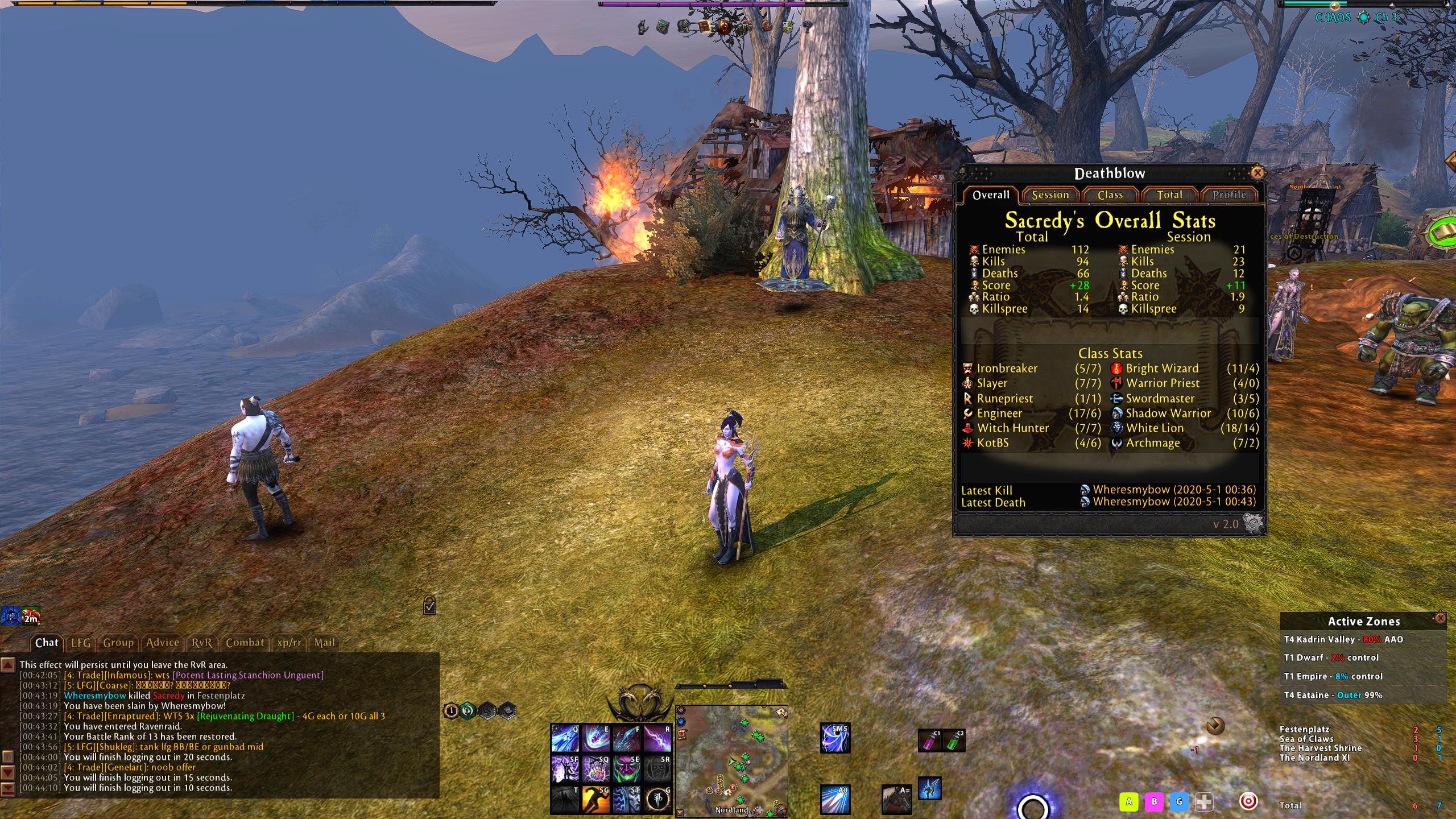 Seahorse Adventures. I upgraded to Fedora 32 and that game was removed. I only played it a tiny bit but was annoyed by the removal. I ported the game to python 3 so it can be added back. Seahorse Adventures Github
1 Likes, Who?

XpanderWarhammer Online - Return Of Reckoning Private server. Been playing it for the Last 6 months or so. Love the epic PvP Battles in this game. Keep Sieges, Fortresses and City Sieges. Currently also leveling an alt, Sorceress Class, which is really powerful, but dies quick if caught :)