Star Labs, maker of custom Linux hardware have revealed the Star LabTop Mk IV and it looks like quite the little powerhouse. They only currently offer two laptop models, with this new version replacing the LabTop Mk III.

With a price starting at £699, the Star LabTop Mk IV features a 13 inch 1080p ARC matte screen with Anti-Reflective Coating and it's built to take a few knocks without breaking too. It's also an IPS screen, so you should get some decent viewing angles on it. The rest of the specs sound good too! 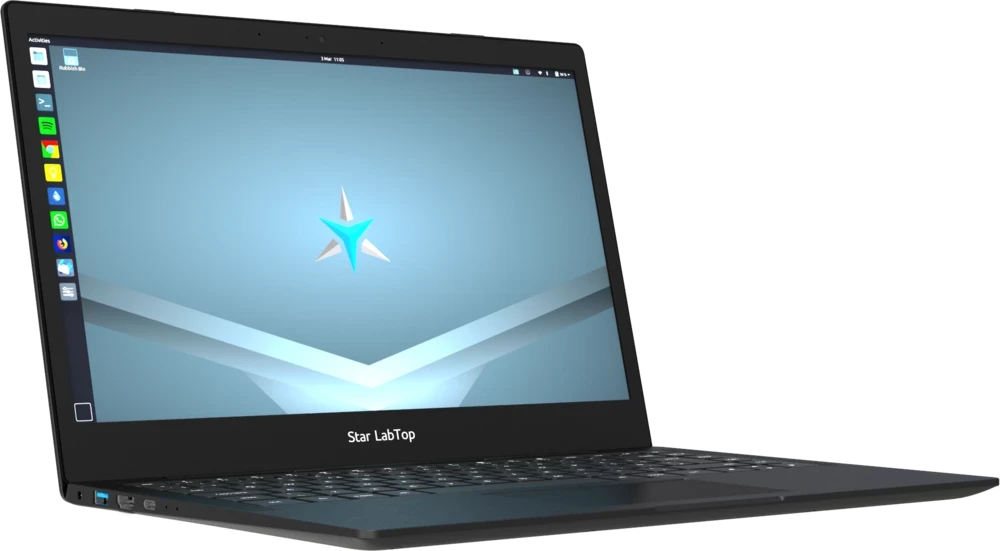 No slouch on the processor either. Featuring 10th-generation Intel processors with Intel UHD graphics, this little 13 inch laptop can be damn useful for a lot of things, including some light gaming and streaming. The standard it comes with is a 2.1GHz dual-core Intel® Core® i3-10110u but it can be configured with a 1.1GHz hexa-core Intel® Core® i7-10710u.

For storage it comes with an 'Over Provisioned Star Drive' 240GB SSD as standard configurable up to 1920GB, with a sequential read speed of up to 3400MB/s. They say this extra capacity with the over-provisioning gives it a performance boost to help the SSD controller during read and write tasks.

It also comes with 16GB of 2400MHz LPDDR4 onboard memory, a Glass trackpad for precise cursor control and Multi-Touch gestures, Intel Wi-Fi 6 AX201, Bluetooth 5.1 and a 720p webcam. As for the battery they say it's a '45.6-watt-hour' lithium-polymer battery that can give about 7 hours life with a 65w USB-C Power Adapter.

They might not perhaps be as big as US-based System76, but the UK-based Star Labs appear to be doing well. Unlike many other suppliers, they're not a Clevo reseller. According to their info, they started with Clevo initially and then in 2018 started building their own. Hopefully they will continue building interesting hardware with great Linux support.

Star Labs are taking pre-orders for it now, with shipping expected in July. They've currently tested and built it working with Ubuntu 20.04 LTS and Manjaro 20.0. See more about it here.

View PC info
Since AMD launched their Ryzen 4000 series laptop processors anything with an Intel processor looks underpowered which is a shame because the rest of the specs here are reasonable for the price. :(

I'm in the market for a new laptop too, was all set to pull the trigger when the first Ryzen laptops landed and now I'm in a holding pattern waiting for more AMD based options to come to market.
6 Likes, Who?

View PC info
16:10 means that my next laptop when it's time to upgrade will be a Dell. I hope other manufacturers can move away from 16:9 as well.
0 Likes

View PC info
Yeah, my current laptop is high-end Dell. Honestly if a Ryzen based XPS comes to market it will be an instant purchase for me - even with the Windows tax.
0 Likes

Quoting: GBeeYeah, my current laptop is high-end Dell. Honestly if a Ryzen based XPS comes to market it will be an instant purchase for me - even with the Windows tax.

There is some law I think (maybe just europe, maybe elsewhere too), that if you don't want windows and they don't offer a version without it, you can get them to refund the windows tax.

View PC info
Great! Now after Lenovo's doing, System76, Tuxedo and these guys, we only need Linux machines to the local Walmart and such

View PC info
I'm always happy to learn about a Linux laptop manufacturer I had never heard of before. I love that they use IPS matte screens; that they support Linux Mint and Manjaro; have 13" screens; and sell spare parts on their website.
0 Likes
Purple Library Guy 11 Jun, 2020
To my surprise, it appears I can order this in Canada. Not so much to my surprise, it costs a bundle in $Canadian. But it does look like a nice machine . . .
0 Likes
PublicNuisance 12 Jun, 2020

To be fair it is cheaper than the Think Penguin J3; Purism 13; or System76 Lemur 14 that I had customized to my liking once I factored in currency conversion. Granted the J3 has support for Trisquel and the Lemur and Purism laptops have Coreboot Support; and the Puirism has kill switches. The Star Labs has none of the above so I would hope it is cheaper.
0 Likes

View PC info
I was in talks to Star Labs sales and they commented me about this option, happy to see it so quickly in the market. I'm in search of a laptop, and for the price this might be the best option so far!
0 Likes

Quoting: CatKiller16:10 means that my next laptop when it's time to upgrade will be a Dell. I hope other manufacturers can move away from 16:9 as well.

I agree that I'm done with 16:9 on laptops. I've had two 3:2 screen laptops, previously a 2015 Pixel Chromebook and currently a Huawei Matebook X Pro, and I seriously can never go back to 16:9 after these experiences. Using a 16:9 feels like squinting now. 3:2 is soooo much better for text productivity on the laptop form, especially for my workflow.

There were suggestions about 2 years ago that Lenovo was going to start doing 3:2 screens, and I don't know what happened to that. An X1 Carbon with a 3:2 screen and Linux would be perfection for me...
2 Likes, Who?
1/2»
While you're here, please consider supporting GamingOnLinux on: