EVERSPACE 2 continues to shape up in Alpha, shows off second star system

The rather pretty open-world space action sim from ROCKFISH games looks to be steadily improving as it nears Beta quality. The developers have shown the adjustments made in response to feedback as well as new content they hope to add soon. In case you missed last month’s shiny new footage, EVERSPACE 2 is looking mighty fine even at this stage of development. Originally crowdfunded late last year, this ambitious sequel expands its chaotic style of gameplay into planetary atmosphere and across the vastness of space. There’s a stronger story component this time around and aspects like trade are also likewise more important than in the original game.

In a recent Kickstarter update, the developers have spoken about some of the changes they’ve implemented since they started the closed alpha. These are mostly quality-of-life changes which nonetheless make playing a much nicer experience. Perhaps more interestingly, the update also shows off their vision for the second star system that players will encounter in the campaign.

Called Union, it seems to be a trade hub filled with adventurous sorts and freelancers of every kind. Numerous space stations and trade routes can be found there and occasional skirmishes between factions can be seen in the area. It definitely sounds like there will be plenty of opportunities for all sorts of activities—both legal and illicit. 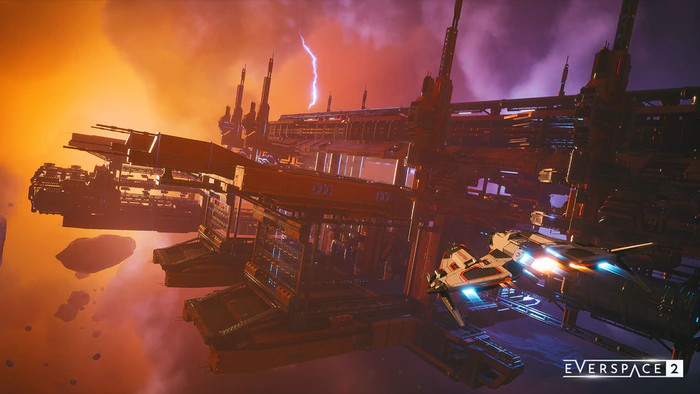 Now, we won’t be getting EVERSPACE 2 supported on Linux during its development period but we should be getting it when it launches sometime in late 2021. For the time being, you can wishlist it on Steam.

While you wait, you might also want to check out the original game. Liam quite liked it though he did warn that it wasn’t for everyone. You can find the original on GOG, the Humble Store or Steam.

View PC info
This looks goddamn awesome. Has a bit of Homeworld vibe to it.
0 Likes

View PC info
"Now, we won’t be getting EVERSPACE 2 supported on Linux…"
This reminds me a lot of other projects. IMO, "Unreal Engine == Stay Away". That's why I never pre-order.

I always have said: Release it on Linux, and we will will talk, but not sooner.
0 Likes

QuoteNow, we won’t be getting EVERSPACE 2 supported on Linux during its development period

Though we won't get native Linux support, it does work with Proton as of now. You just need to force the renderer to use DX11 with Launch Option -dx11. Maybe the current Alpha build works now with proton-next as DX12 support has been updated for Death Stranding, haven't tried it yet myself.

Rockfish Games have delivered their promise of a native Linux version with Everspace 1, though being this close to cancel the Linux port due to heavy technical issues with UE4 at that point. But UE4 has matured a lot, and ES2 will get Vulkan support for release. I'm pretty confident they'll deliver their native Linux support promise for ES2 as well. So if you want to jump on early and help shaping ES2 during early development, you can use Proton with the tweak mentioned above and enjoy already now up to 10 hours of gameplay and story (if you are a backer, as the closed Alpha is only available to backers right now). It opens up with early access for everybody in December iirc.

Also, you can play the Demo, which is still available, though it's not a "Demo", but a tech preview. It contains a few missions, but no story. The Demo works with Proton and no tweaks.

I'm so looking forward to final release, or getting my hands on the 2nd star system: Union. It looks gorgeous.

edit: really looks like it does work with proton 5.0-10 (current next branch) and with DX12. Proton GE with MF may still be needed for movies to play though. Performance for me on my 1070 is way better though, when using DX11.


Last edited by Corben on 1 August 2020 at 3:52 pm UTC
0 Likes
While you're here, please consider supporting GamingOnLinux on: