Nimbatus is a game where you can let creativity flow and design some really wild and explosive stuff, now even more so with a major update out.

Not played it or seen it? You get to go through a random campaign, hopping from one planet to the next as you build up a powerful drone block by block. This can be entirely manual to get into the action, or you can attach various simple logic blocks and sit back to watch the fireworks. There's also various PvP modes too.

It released in full back in May, with the first major update out now. This free upgrade includes the ability to multi-select drone parts when editing, store drone parts as templates to re-use, new tutorials, a free camera option for the Programmer captain and various bug fixes. There's also some new building parts you can use including wheels, a grappling hook and a ballast tank. Certainly will be amusing to see what drones people come up with to use them. Springs also gained a linear option, which they say allows for better suspension on wheels. 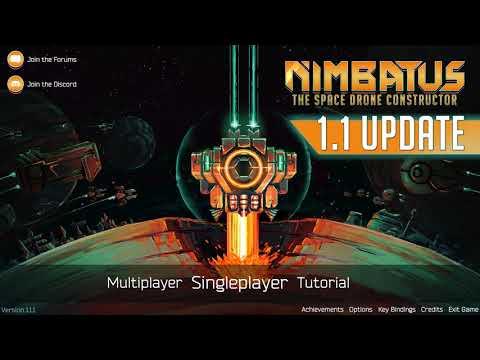 The team also teased that a new Kickstarter will be coming "in about 2 months" for their next game, a city-builder where you're building on the back of a giant creature. Sounds interesting! Will keep an eye out for it.

You can buy Nimbatus from Humble Store and Steam. There's also a demo with the Drone Creator on Steam too.