Lenovo begins rollout of Fedora Linux on their laptops, Ubuntu systems due soon

After being announced by the Fedora Linux team back in April, the rollout of Fedora across Lenovo laptops appears to have begun along with a sale.

The first model appearing with Fedora as an option is the ThinkPad X1 Carbon Gen 8. Not only has it rolled out with Fedora, it's right there on the store and you can't miss it as it shows up first, as it's also the cheapest option for this model available right now. Just look at how visible it is: 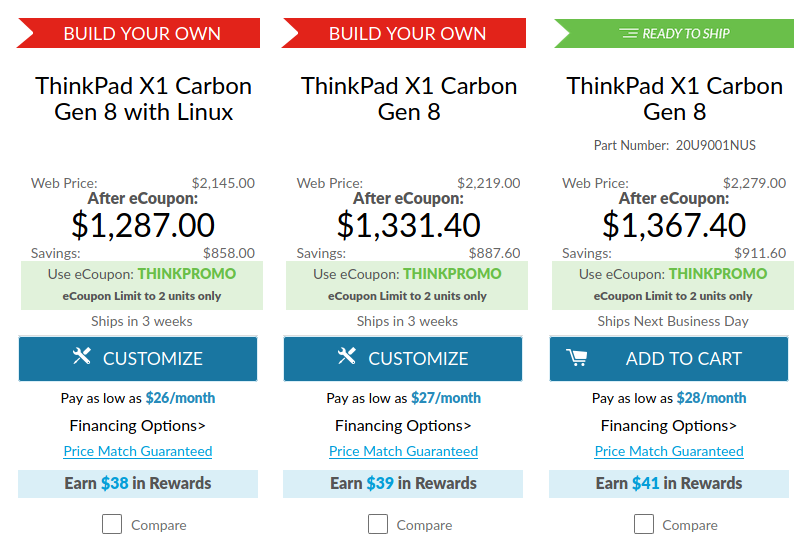 You can't miss that!

As the Fedora team mentioned in the original announcement, it's coming without any bloat as they said Lenovo "respects our open source principles". The only software they will have is from the included repositories, no extra fluff.

Currently it seems to have only rolled out to the US, hopefully other markets to follow.

What Lenovo are doing here is just the beginning. We also know from what's already been said, to expect Fedora Linux to be rolled out to the ThinkPad P1 Gen2 and ThinkPad P53. On top of that, they also announced back in June that they would be taking much bigger steps with Ubuntu and Red Hat across more lines. It seems they hit a few snags with Ubuntu but that's coming soon to the ThinkPad X1 Carbon Gen 8 and other systems.

This is exciting and needed. While we do have dedicated Linux vendors like System76, TUXEDO and a few others, it's the much more well-known vendors we need on board. Linux being proper advertised by hardware vendors is one of the keys to a wider market.

We do often include affiliate links to earn us some pennies. We are currently affiliated with GOG and Humble Store. See more here.
About the author - Liam Dawe
I am the owner of GamingOnLinux. After discovering Linux back in the days of Mandrake in 2003, I constantly came back to check on the progress of Linux until Ubuntu appeared on the scene and it helped me to really love it. You can reach me easily by emailing GamingOnLinux directly.
See more from me
Some you may have missed, popular articles from the last month:
The comments on this article are closed.
26 comments
Page: «2/3»

Uh nice, I'm thinking about a new laptop for various reasons, this will be a serious option. I know roughly how an eGPU setup is supposed to work. Lets say one would combine this machine with a Razer eGPU box with a NVidia card. Does this setup (hotplugging, extend desktop, launch software on the eGPU on the external display, ...) works on Linux?
0 Likes

Solarwing 30 Aug, 2020
Great. Another reason to empty my bank account.Some part of me still thinks this is rip off when you look at the Lenovo's prices mentioned above (even if it has a discount?). "Well maybe you are wrong at this time and you must hack into your local bank's server and add a couple of zeroes onto your bank account. Then you can buy a new Lenovo laptop" I say to myself."What a jolly idea!you must put it into operation after the next midnight" that part of me answers.Okay enough with jokes!I Mean it's still good to have more vendors and alternatives to the Market.Now if people could have more courage to try something new...

I think that's actually the first vendor to offer Fedora by default, cool ! :) I tend to much prefer Fedora to ubuntu, as it manages to be both more bleeding edge and much more stable in my taste.
1 Likes, Who?
Purple Library Guy 30 Aug, 2020

Quoting: lejimsterI was seriously looking at a Lenovo laptop earlier this year. It's nice to see a big brand supporting Linux so much. I would still likely erase the installed OS and put my own distro on.

Yeah. Even if you're putting on your own distro, it's still nice to be fairly sure the hardware won't have major driver issues.
6 Likes, Who?

QuoteWe also know from what's already been said, to expect Fedora Linux to be rolled out to the ThinkPad P1 Gen2 and ThinkPad P53

Quoting: CatKillerFedora were very insistent that they'd only take part if they were using standard images of software from Fedora's repos.

I really wonder how this is supposed to work. As far I can tell, all ThinkPad P53 have a nVidia GPU. Without the proprietary driver features are missing (obviously GPU power, but also all display outputs are handled by the nVidia GPU and the power consumption could be higher).

According to Jason from Linux4Everyone (who got one of those P53 early), the base image ships with the nouveau driver and you have to manually enable third-party repositories to download the proprietary nvidia driver.
I'm sure there's good reasons for that, but I wish they would have gone the PopOS route and made the proprietary driver the default instead. Especially considering that this machine is aimed at professional who most definitely want to use the full power of their Quadro GPU.
1 Likes, Who?

Quoting: emphyGreat; now we will likely also get lenovo bloat- and spyware for linux, including that one that gets reinstalled on a fresh os install ...

Nobody's forcing those apps on your existing PC. If you don't want them, don't buy those laptops, easy. Or just uninstall them.

Lenovo has been shown to have the bios install adware on fresh windows installs, so "just uninstall" is not a good recommendation in this case.

Now I am wondering, though; that method used "Windows Platform Binary Table", which obviously is not present in linux. Does linux have a similar feature and, if so, could it be easily disabled?

Quoting: jensUh nice, I'm thinking about a new laptop for various reasons, this will be a serious option. I know roughly how an eGPU setup is supposed to work. Lets say one would combine this machine with a Razer eGPU box with a NVidia card. Does this setup (hotplugging, extend desktop, launch software on the eGPU on the external display, ...) works on Linux?

I have an eGPU, I didn't have much luck with getting it to work last time I tried, but it's probably been a year.

One thing about Thunderbolt ports, is that they properly require authorization first under Linux, whereas Windows seems to treat them more just like USB devices... I'll have to give the eUSB a test again to see if they've gotten that fixed.
0 Likes

Quoting: 3zekielI think that's actually the first vendor to offer Fedora by default, cool ! :) I tend to much prefer Fedora to ubuntu, as it manages to be both more bleeding edge and much more stable in my taste.

I intermittently test out Fedora. Never seems quite stable to me. Like there are always little rough edges around it that show that it's still RH's playground. This time around (version 33?) the fwupdate daemon would keep crashing, there were supposedly some fixes in the newer version, but I never did manage to get it to work, which meant the software update program would constantly say there was an issue with updates.

But the fact that Lenovo's and Logitech's firmware are now updated through that, it's actually VERY impressive! Remember when updating firmware had to be done either via DOS boot disks or Windows? Those days are coming to a close!
1 Likes, Who?

Quoting: emphyGreat; now we will likely also get lenovo bloat- and spyware for linux, including that one that gets reinstalled on a fresh os install ...

What would hinder you to re-install a pristine distribution on the machine? The same I did with my X13 I bought a few weeks ago. Took me 15 minutes to have the machine up and running.
0 Likes
«2/3»
While you're here, please consider supporting GamingOnLinux on: