Looks like Total War Saga: TROY is still coming to Linux in 2021

While currently Total War Saga: TROY is exclusive to the Epic Games Store, it appears Feral Interactive are still planning to bring official Linux support with a port onto Steam in 2021.

A Linux port was planned, and was actually confirmed when the game was originally announced back in early 2019. It later went exclusive to the Epic Games Store, which of course messed things up for Linux because Epic Games still won't support Linux with their store. Still, it will release on Steam in 2021, because that's when the exclusive period will be over.

What caught our eye was that Feral Interactive ported it to macOS and put that live on the Epic Games Store, and when this happened any mention of a Linux version was removed from Feral's famous upcoming port radar and this caused concern with readers emailing in about it - thinking it was cancelled for Linux.

Thankfully, that seems to not be the case. We emailed Feral Interactive who confirmed today that was a "technical glitch" and the Linux version of Total War Saga: TROY now appears again on their upcoming port radar list. 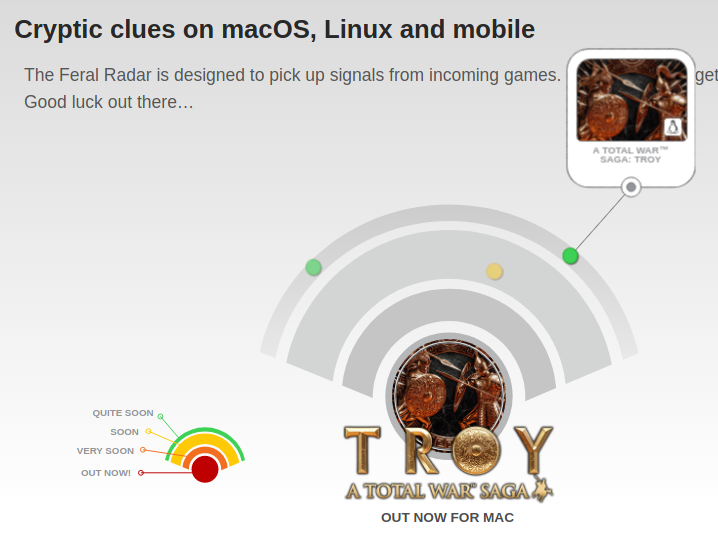 Feral mentioned they will make an announcement as soon as they have news on the game for Linux, which is the expected response, as of course they can't give out any more details until Creative Assembly / SEGA themselves do about the Steam release date.

You can wishlist / follow Total War Saga: TROY on Steam.

Nice to hear Feral is still porting to our platform.
Let's hope this will not be the last one.
9 Likes, Who?

orochi_kyo 12 Oct, 2020
View PC info
Another clue comes with this, when a dev needs Epic dirty money, it means the game isnt that good to the point the developer does not trust on their possible sales, better going safe with Epic grant than trust your own product. So do not blame if Im not hype for this, better invest in other devs that have guts or trust that their work is good enough.
2 Likes, Who?

View PC info
Feral support for Linux appears to have slowed way down. I wonder if they are moving away from Linux and more towards IOS/Switch?
1 Likes, Who?

Quoting: orochi_kyoAnother clue comes with this, when a dev needs Epic dirty money, it means the game isnt that good to the point the developer does not trust on their possible sales, better going safe with Epic grant than trust your own product. So do not blame if Im not hype for this, better invest in other devs that have guts or trust that their work is good enough.

Creative Assembly/SEGA decided to go with Epic at the last minute to get the 12% fees rather than Steam's 30%, Feral had no choice as the exclusive was signed by the publisher, not them.
0 Likes

Quoting: GuestFeral can't port any game they might want, they have to make a contract with publisher first. I think it's more likely that publishers that previously have worked with Feral or Aspyr are losing interest in Linux support.

It's probably a mixture of both. Feral and Publishers not so interested.
0 Likes

View PC info
Well it is not on the radar anymore. The only thing they have listed is XCOM 2 for IOS. I hope it is another glitch.


Last edited by chui2ch on 26 October 2020 at 6:18 pm UTC
1 Likes, Who?
While you're here, please consider supporting GamingOnLinux on: