Using the tech built for the likes of CS:GO, Destiny 2, and Dota 2 - Valve has officially rolled out the new Steam Chat Filtering across the rest of Steam.

So now this means you can have a consistent experience across supported games, the Steam desktop client, web, and mobile chat experiences. The key thing is that it's optional, you can turn it off or turn it up as the choice is still mostly down to users on what they want to see. As a default, Valve has turned it on to block "strong profanity and slurs" from people you don't know. These settings can be changed any time here. 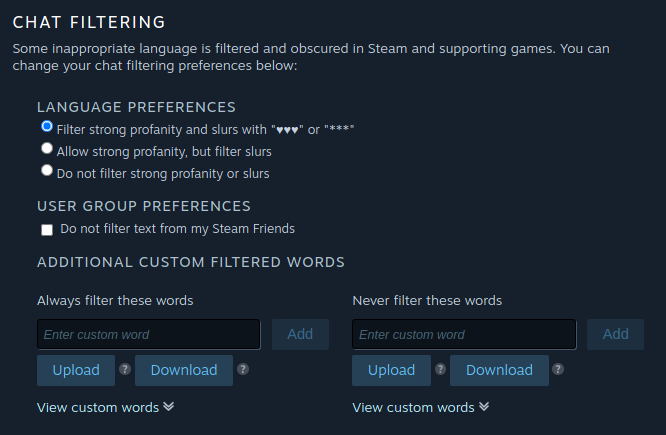 Valve said they continue to invest in systems for store and community content moderation, which are enabled by default. However, this was put in place so users get a little more control over what they want and don't want to see from others and at "user and partner requests". They already ban profanity and slurs from prominent public-facing areas on Steam but they don't want to outright block it and just let users choose instead.

The default lists they built up should block commonly used strong profanity, along with "commonly used slurs against various racial, religious, ethnic, and other identifying groups".

Game developers can make use of it for online chat if they wish too, it's not limited to the big titles. You can find info on how to use it here.

Article taken from GamingOnLinux.com.
Tags: Steam, Valve
13 Likes, Who?
We do often include affiliate links to earn us some pennies. We are currently affiliated with GOG, Humble Store and Paradox Interactive. See more here.
About the author - Liam Dawe

View PC info
In general this sounds good to me.

The only thing I'm curious about is the international aspect. A lot of these filters tend to be very Anglo-centric which can be annoying when trying to converse in a native tongue. For instance one that has frequently tripped me and my friends up is the Swedish word for end which is a homograph of an English word that is sometimes used as an insult to a woman and thus understandably filtered.

There is also a similar issue within the Anglo-sphere, for instance with the common British word for a cigarette is a homonym of a derogatory term for homosexuals in the USA.

So if I want the filter to apply even to Friends, I won't be able to see or use that word while speaking my native language unless Steam is able to account for that, which sounds like a hard nut to crack for sure. Sure glad that isn't my job...

View PC info
That way everyone has choice. I disabled it.

That reminds me that old joke:

A puritan checks in into a hotel, raises his chin and asks the receptionist:

View PC info
If only they'd make the News section in the Library optional: that would definitely reduce the need for a profanity filter on my end.

Quoting: shorbergThere is also a similar issue within the Anglo-sphere, for instance with the common British word for a cigarette is a homonym of a derogatory term for homosexuals in the USA.

Being curious, I translated the derogatory term to German, translated that to English to get a list and those back to German to find Eff Ay Gee. :)
0 Likes

View PC info
They aren't even considered 'curse' words anymore, but strong ones? I liked it when they were referred to as cursing. Gave you damn good method to damn someone :P By the way, damn is still my favorite word. Though for sure there are issues with how dictionaries now say dammit or damnit should be spelled... as apparently they don't like the version with the n in it...
0 Likes

Quoting: shorbergThere is also a similar issue within the Anglo-sphere, for instance with the common British word for a cigarette is a homonym of a derogatory term for homosexuals in the USA.

There's also a word for a bundle of sticks used for kindling, or for a large meatball.

And the perennial Scunthorpe.
2 Likes, Who?

Valck 8 Oct
View PC info
What a stupid nonsense. Thankfully we seem to have the option to disable it, which I did as soon as the update hit. Not that I'm a particular proponent of cursing or so, but I like to know that what both ends of a conversation get to see is the same as what both ends wrote, or at least have the illusion of knowing(</sarcasm>).

And yes, I too wish there were the same freedom of choice regarding that idiotic "news" section... if only they'd put the endless hours of interface development crunch work into making that optional instead of a censoring filter that is inevitably going to miss or misidentify words – unless AI got to the point where it is more creative than humans. In which case I guess we don't need to worry about petty chat filtering any more.

View PC info
Welcome to the USA. Where ultra violence is fine and sometimes encouraged. But don't you dare say a naughty word or try to see anyone fully naked!
(Had to bring that up as I was just getting into Conan Exiles again, where I had to order the UK version of the game so that the glory of full nude option is there on the PS4).
0 Likes

Quoting: slaapliedjeWelcome to the USA. Where ultra violence is fine and sometimes encouraged. But don't you dare say a naughty word or try to see anyone fully naked!
(Had to bring that up as I was just getting into Conan Exiles again, where I had to order the UK version of the game so that the glory of full nude option is there on the PS4).