Here is your daily dose of not-linux-gaming news but still awesome. F(x)tec are currently crowdfunding (and very successfully so) for a new high spec Linux phone with a physical keyboard.

The thing is, it's not just another Android phone. Well, it could be, if you wanted that. The Pro1 X will be available with either Android, Lineage OS or Ubuntu Touch OS out of the box which is why we're so interested in it. Not only that, if you do get the Ubuntu version it will offer full convergence by turning into a proper computer if you hook it up to a monitor.

With a sleek 64-key physical keyboard which slides out from behind, you get full access to do whatever you need. It's a proper little mini-computer. 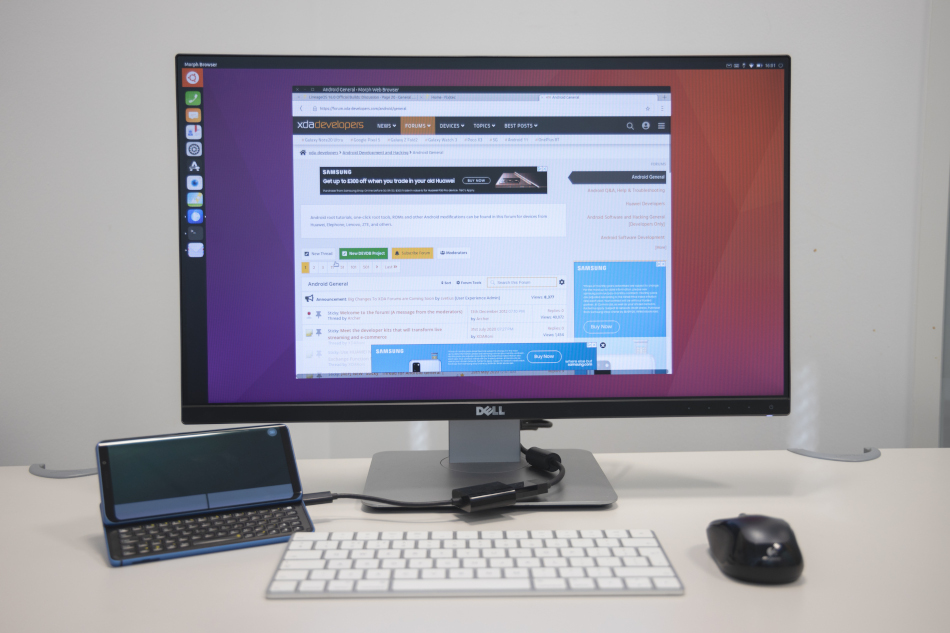 F(x)tec teamed up with the well-known and loved XDA community to create the phone:

"After the fantastic feedback we received from users of the Pro1, we’re excited to partner with XDA to offer our customers choice of an alternative OS out of the box; a pure smartphone experience with Lineage or a truly open linux OS with Ubuntu Touch. Both of our communities share the importance of greater control and more functionality in our smartphones." Said Adrian from F(x)tec, "We’re really proud of what the Pro1-X represents in terms of freedom to choose something different combined with the practicality of a keyboard experience."

My first proper smartphone was the HTC Dream, otherwise known as the G1 and the first commercial Android phone. I have such fond memories of it with the physical keyboard, so the F(x)tec Pro1 X having that and Ubuntu? I might be a little sold on this. I do have to wonder what kind of gaming would be possible on such a device, would certainly be fun to have a go with it.

You can find it on IndieGoGo.

If you missed it, do check out our article on the upcoming PinePhone - KDE Community edition.

Article taken from GamingOnLinux.com.
Tags: Crowdfunding, Hardware, Upcoming
27 Likes, Who?
We do often include affiliate links to earn us some pennies. We are currently affiliated with GOG, Humble Store and Paradox Interactive. See more here.
About the author - Liam Dawe

Quoting: tuubiYou never got your refund?

No. However, to be fair to Jolla (which they don't deserve, in my opinion) I do recall ticking the box that effectively meant that they should keep the money. I still had hopes that they could do good things with Linux. It wasn't so much the loss of the money, but the scandalous nature of their behaviour that annoyed me the most. Never again.

It's disappointing but maybe understandable that a small startup has trouble finding a foothold in this market ruled by a duopoly of giants. That said, I'm quite happy with Sailfish X on my current phone. Hopefully it'll still be an option the next time I need to buy one as well, or at least that there'll be a decent, supported Linux phone OS (with android app compatibility and a workable user interface) available for a reasonable price.
0 Likes

i use a BT keyboard cover on my phone now but it still needs a surface to sit on, something i could hold by the keyboard and type with my thumbs....
0 Likes

Quoting: JuliusAlthough to be honest, as a phone OS Ubuntu Touch is actually better than desktop Linux.

I used an "official" Ubuntu Touch smartphone (the bq Aquaris E5: Ubuntu Edition - which I still have on my desk) as my "daily driver" for about a year, and it was fantastic.

Was it as polished as Apple iOS or Google's Android? Admittedly, no - but it showed an awful lot of promise, well until Canonical abandoned it, anyway.

Had Canonical not abandoned the project though, I truly believe that Ubuntu Touch could have become a viable alternative to the iOS / Android duopoly... Not enough to break the duopoly, but enough to warrant further pursuit.

I also believe that certain major manufacturers missed the opportunity to jump on the Ubuntu Touch train do something with it, when they were struggling to differentiate themselves in the world of Android.


Quoting: kaimanthere are a few essential apps forced on me by the likes of my Bank (for 2FA) or the local public transport (for buying tickets when there is no ticket machine, or it isn't working) or all those "smart" things that want to pair with my mobile device (because why provide a web-interface for configuration when it can have an app instead!?).


Quoting: kaimanBut then again, in that case I'd likely still be running my trusty Blackberry ...

God I miss my BlackBerry... I spend half the day swearing at my iPhone, because I miss my physical keyboard (my wife and daughter think it's the funniest thing in the world)!

But I can't bring myself to make the jump to Google's Android (which is what is run on "modern" BlackBerry smartphones); with the level of privacy I would have to give up, I just cannot justify it (not to mention the lack of updates / upgrades for Google's Android).

Aside from the laundry list of privacy concerns with regards to Google's Android, this its biggest problem... We've got a whole house full of Android devices (smartphones, tablets, TV set-top boxes and "smart" TVs), most of which are mid-range or high-end, mostly from major manufacturers (e.g. Samsung)... And probably 90% of those have seen not seen updates (e.g. 6.0 to 6.1) for more than 12 months; when it comes to upgrades (e.g. 6.x to 7.x), that number would easily be 99% of them.

And every 12 months or so, Google makes this big song and dance about how they're going to do this and do that to address this problem... Yet after 5+ years, nothing has changed (well, unless you buy one of Google's own devices).

All of them provide an excellent keyboard AND support multiple operating systems (including the option the install several systems in parallel): Android is shipped by default, but Debian is also available, as well as Sailfish OS and Kali Linux on the Gemini (but not Ubuntu Touch) - https://support.planetcom.co.uk/index.php/Main_Page has all the details.

I'd be really interested the hear about the quality of Linux support for the F(x)tec devices, though: A friend of mine ordered the Livermorium extension for the Motorola Moto Z, and I ordered Planet Computers' Gemini when both companies were running their crowdfunding campaigns at almost the same time. Unfortunately Motorola then basically dropped support for the Moto Z, and he opted for the refund instead of getting the F(x)tec device developed from the shards of the Livermorium project - so I haven't seen any F(x)tec device in real live...

For those interested in the Planet Computers devices: Yes, Linux support is there, but it's a bit rough around the edges and progress is quite slow - though it's steadily getting better over time. In fact I've (exclusively) been using Sailfish OS on my Gemini for a few years now... And for the Cosmo telephony and SMS are possible from within Debian(!) :-)
1 Likes, Who?
«2/2
While you're here, please consider supporting GamingOnLinux on: