Stuck on an island where the volcano is erupting constantly, Volcanoids is an interesting setting for a survival game that gives you a big moving drill for a base.

After sticking in co-op to the Early Access game a while back, the team at Volcanoid (yes the team is named like the game), have now boosted the combat in the game to make it actually a lot more interesting. To say this is a huge update would be quite the understatement. They added in aiming down sights, weapon recoil, bullet drop and spread, hit indicators, actual projectiles (no hit scans), lots of new animations, new guns and…you get the idea.

Check out the new trailer to show it off: 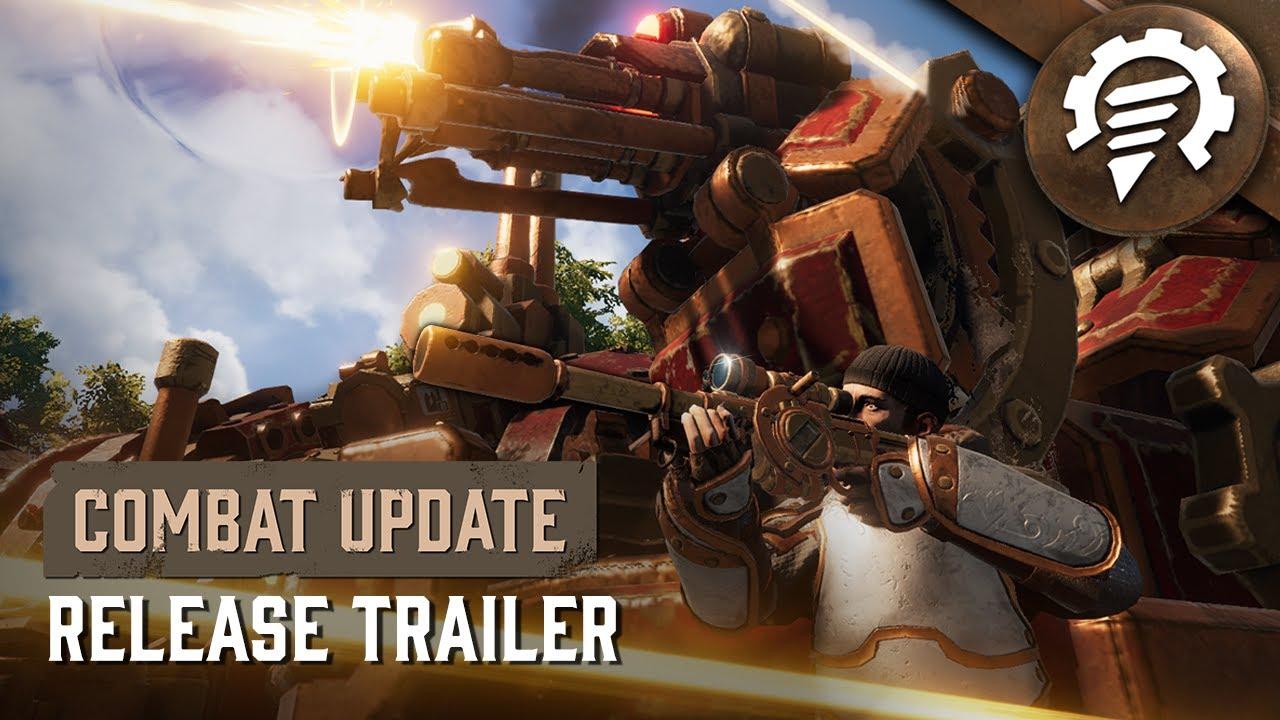 Enemies got more interesting too and they no longer aimbot, they have to try and hit you now. Enemy COG robot units also now come in many more flavours and designs for each class and tier, plus they learned some new tricks like how to switch weapons depending on the situation, what clever cogs. There's even more like new sound effects, turrets to build and even a defibrillator to bring your buddies back to life.

For me it's probably one of the most exciting open-world survival games (next to Valheim) supported on Linux. The idea that you build up a base that doubles as a moving drill you walk around inside, it's just awesome and very steampunk with the inspiration and design work. Lots of levers to pull and big buttons to press.

View PC info
Sounds very promising. Combat was the biggest flaw of the game, it just wasn't fun to fight any enemies. You pretty much sucked up bullets and hoped that you live longer than your enemies. Have to give it another go, I guess.
0 Likes

View PC info
Will give it a shot if i get some time. The combat was indeed pretty dull. There was no real feedback from shooting weapons didn't have any real kickback, bullets didn't have drop, enemy AI was dumb and there just wasn't any satisfaction from it.. Rest of the game seemed really nice though.
1 Likes, Who?

View PC info
One of the survival games I'm most looking forward to.
Still holding out for "final" release, though.
0 Likes

Quoting: TheSHEEEPOne of the survival games I'm most looking forward to.
Still holding out for "final" release, though.

I'm usually a wait-for-a-final-release kinda dude, but today I just snapped and bought it for me and a friend. Weirdly, I bought it 'cause of an email from Steam saying it was 25% off, even before I came to do my daily doings here on GoL. I'm sure the same thing is going to happen on Feb 2nd when Valheim hits Early Access.

What's going on? Who am I anymore?

View PC info
Impressive. Especially when compared to before. This looks like a lot of fun now :)
0 Likes

ripper81358 22 Jan, 2021
View PC info
This game has an interresting concept and the new content is great. However it is still in early access and seems not to be well optimized on linux. I have tested the game on my System (Ryzen 5 3600, Radeon RX 5700, Kubuntu 20.10 with the lastest stable MESA Drivers) and performance was still all over the place. I experienced a lot of stuttering and input lag while gaming. FPS where reaching from 80 FPS to 44 FPS on 1080p with the high quality preset. As the game does not allow to use exclusive fullscreen FreeSync wont work on linux.

I have tested the game with Vulkan by setting "-force-vulkan" as a startoption in steam. This lead to higher and more stable performance on my system and made the game more playable.

View PC info
This is great! I tried the game with a friend months ago and it was fun for some hours, but we got to a point where where we decided to wait for more content. Maybe we can find time to try the update!
0 Likes

View PC info
i have -force-vulkan enabled as well as vkbasalt to add more sharpness. it runs 100+ fps most of the time, with few drops down to 80 in some places, 2560x1440 maxed, blur and vsyncs off. ryzen 3700X, GTX 1080Ti.
The only weird thing is that it has some very weird and slight input stutter, like its skipping my input a bit..its barely noticeable, but enough to annoy me... maybe some input smoothing tech is used...have to try and test more.

combat update is nice though.. it feels so much better now
0 Likes
While you're here, please consider supporting GamingOnLinux on: